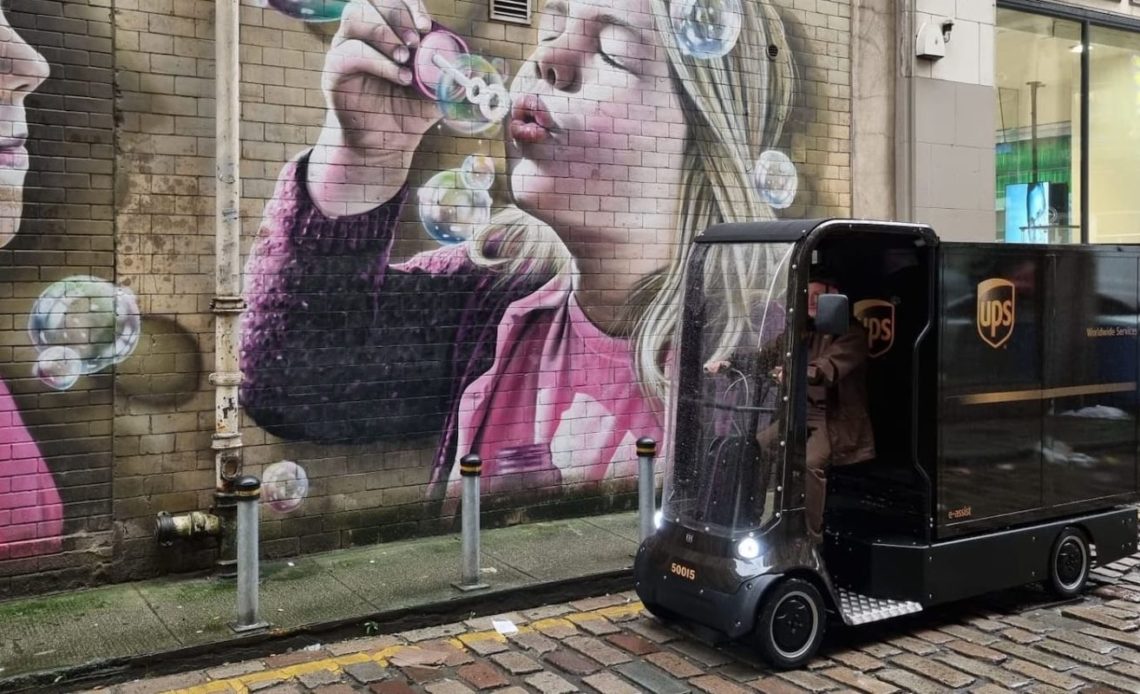 Not do be outdone by the United States Postal Service testing out electric bikes as a viable alternative to mail trucks, UPS is doing its own US-based testing of e-bikes for package delivery.

They may look vaguely like a UPS van or truck, but the design actually uses an electric bicycle mid-drive motor paired to a set of bicycle pedals, making this more of a quadricycle. The official name of the vehicles given to them by their builder Fernhay is the “eQuad”, which now makes a bit more sense knowing the quadricycle classification.

The manufacturer refers to the cute little vehicle as a “four-wheeled e-assist cycle,” and says that it is designed for pickups and deliveries in places where a typical large delivery van would be overkill or simply couldn’t reach.

Measuring a narrow 84 cm (33 inches) wide, the little eQuad can slip through nearly any area a bicycle can, making last-mile deliveries quicker and more efficient.

The entire vehicle is less than 3 meters (10 feet) long, and most of that length is storage space. The “Cube” system that Fernhay uses consists of a 1.8 meter (6 feet) long cargo box on back, and can swapped as a modular system.

Functionally speaking, the eQuads work like a conventional pedal assisted electric cargo bike that uses the rider’s own pedaling to activate an electric motor for added boost. But the inclusion of four wheels technically takes these eQuads outside of e-bike or trike classifications in many areas.

Even so, there’s no getting around the fact that what is essentially an electric cargo bike is being tested out as a significantly smaller vehicle that could prove to be a huge asset to local package delivery in tight and congested urban neighborhoods.

Despite its striking appearance compared to conventional electric cargo bikes, the eQuad is designed to share the bike lane with other cyclists. As the company explained, “a low load area and high seat allow for our operator as well as fellow cyclists to see around or over the eQuad.”

UPS began testing the smaller format delivery vehicle in Europe earlier this year, but has now expanded that testing to the US, with eQuads being spotted in NYC bike lanes this month.

As the industrial engineering director for UPS Nicole Pilet explained:

New York is a complicated city, when we look at the density. So if we can have success here in the city, then we can see how we implement in other cities throughout the U.S.

I’m a huge fan of pretty much everything about this.

Sure, it’s not going to work for every UPS route, but that’s not the point. When Jim Bob needs his 100 lb sack of ostrich feed delivered to his remote farm, that’s probably a normal UPS truck job. I’ll let you win the argument about that super specific case, Mr. Straw Man. But wiggling in and around crowded urban spaces is exactly what bikes are designed for, and a bike-van like this seems… right up that alley?

But seriously, this is such a great answer to the question “How can we practically remove cars from cities when commercial vehicles are still required?” How about we just make commercial vehicles smaller? Barcelona’s urban garbage trucks are more like electric wheelbarrows. Perhaps large wheelbarrows with room for a driver to sit, but they barely count as a truck and frankly look pretty adorable. So shrinking down commercial or municipal vehicles into something that is smaller than a car is absolutely doable, and it is a great step in the right direction towards car-free and walkable cities.