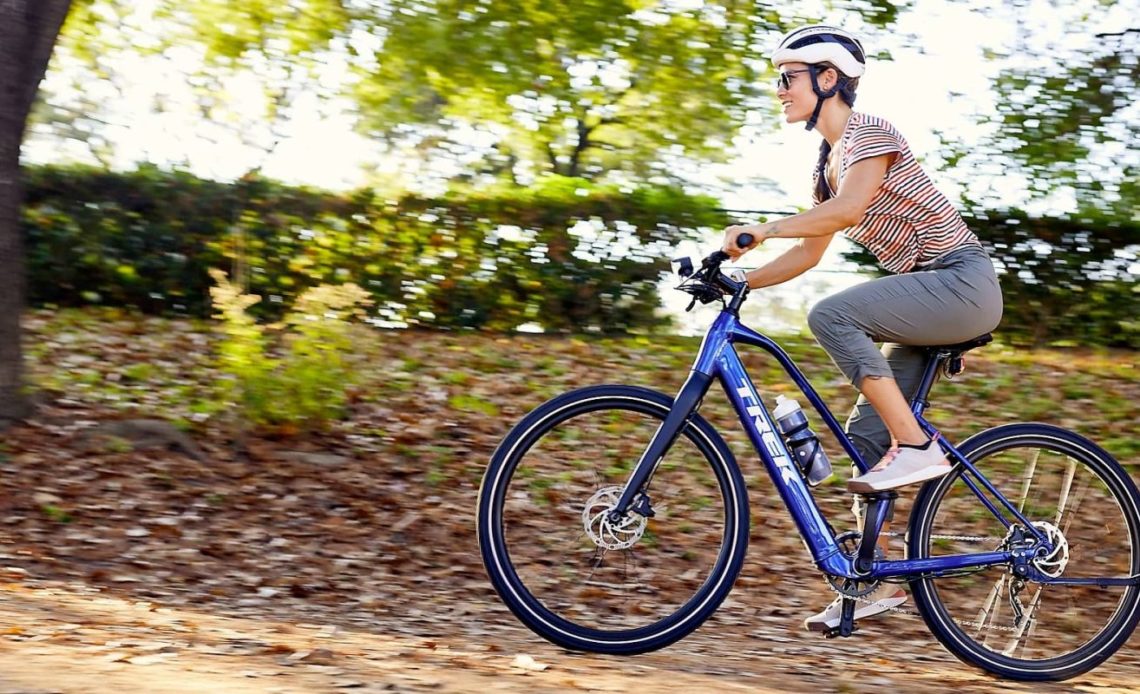 If you’ve ever explored Trek’s electric bike families before, you’ll know that the companies offers nicely made yet high-priced e-bikes. You get what you pay for, though you pay handsomely. But now Trek has just released two e-bikes – the Dual Sport+ and the FX+ – that are helping bring down prices for everyday riders.

Both of the bikes are targeted more towards that quickly growing group of everyday riders.

While Trek has plenty of $8,000 electric mountain bikes and road e-bikes for the hardcore riders out there, these two new models are designed for everyone else; the kind of riders that just want to get out and hit the pavement or the dirt without worrying about shaving off every last gram or bragging about top tire components.

While both of the new models could likely handle both urban riding and manicured trails, the Dual Sport+ certainly has one wheel further in the dirt category while the FX+ is more of your everyday commuter e-bike.

The Dual Sport+ is essentially an electrified version of Trek’s existing Dual Sport line; the bike is available in a step-over format (Dual Sport+ 2) or a step-through version (Dual Sport +2 Stagger).

, or several thousands dollars less than most of Trek’s other e-bikes.

The lack of a mid-drive motor combined with a smaller battery helps drop that price. The 250W hub motor carries the same 250W continuous rating as most box store e-bikes, though the 40 Nm of torque is admittedly on the lower end of the spectrum for e-bike torque ratings.

The Trek Dual Sport+ only has three pedal assist settings, but a torque sensor in the bottom bracket will help produce intuitive feeling electrical assist in all three power levels. The remote on the left side of the handlebars makes it easy to switch between power levels and check your battery charge level without taking up too much space with a large display.

Powering that motor is a 250Wh battery hidden in the frame; Trek says it’s good for 35 miles (56 km) on a charge. An auxiliary battery is available as a range extender that sits in the water bottle holder and double that ranges to 70 miles (112 km).

There’s no suspension to be had, but the 2″ tires should give a bit more relief with modest air pressure.

The small motor and battery combination help the bike shed some poundage, weighing in at 38 lbs. (17.5 kg).

Other features on the bike include a lower tier 9-speed Shimano Altus transmission, decent Shimano hydraulic disc brakes, and both front and rear LED lights.

Racks and fenders aren’t included standard but there are mounting points for adding those accessories if you want to turn the bike into a commuter-ready two-wheeler.

Though if you’re more focused on commuting, the Trek FX+ is likely the better option; it’s Trek’s second new model and is designed more for urban riding. Not only does it comes with a rear rack and fenders pre-installed, but it also marks one of Trek’s most affordable urban e-bike models yet with for both the step-over and step-through models.

Electronically, the Trek FX+ e-bikes offer much of the same components as we saw in the Trek Dual Sport+ models. There’s a 250W hub motor, 250Wh battery built into the frame, a minimalist remote/display on the handlebars and a torque sensor in the bottom bracket.

The bike takes on a bit more of a street vibe with its geometry and slightly narrower tires. But a lot of the bones here are quite similar.

Both bikes come in four sizes of S, M, L, and XL. They’re available either from or a local Trek dealer.

But you’re also paying for more than just a spec sheet here. You’re getting the service and support of a large bicycle company with a worldwide dealer and service network.

Are the bikes as well made as Trek’s $8k e-bikes? I doubt it. But are they better made than a one-size-fits-most $1.5k direct to consumer e-bike? You better believe it.

So if you’re looking for bang for your buck, this probably isn’t it. But if you want a bike shop e-bike – and all the advantages plus the peace of mind that entails – I could see these Trek e-bikes as good options.