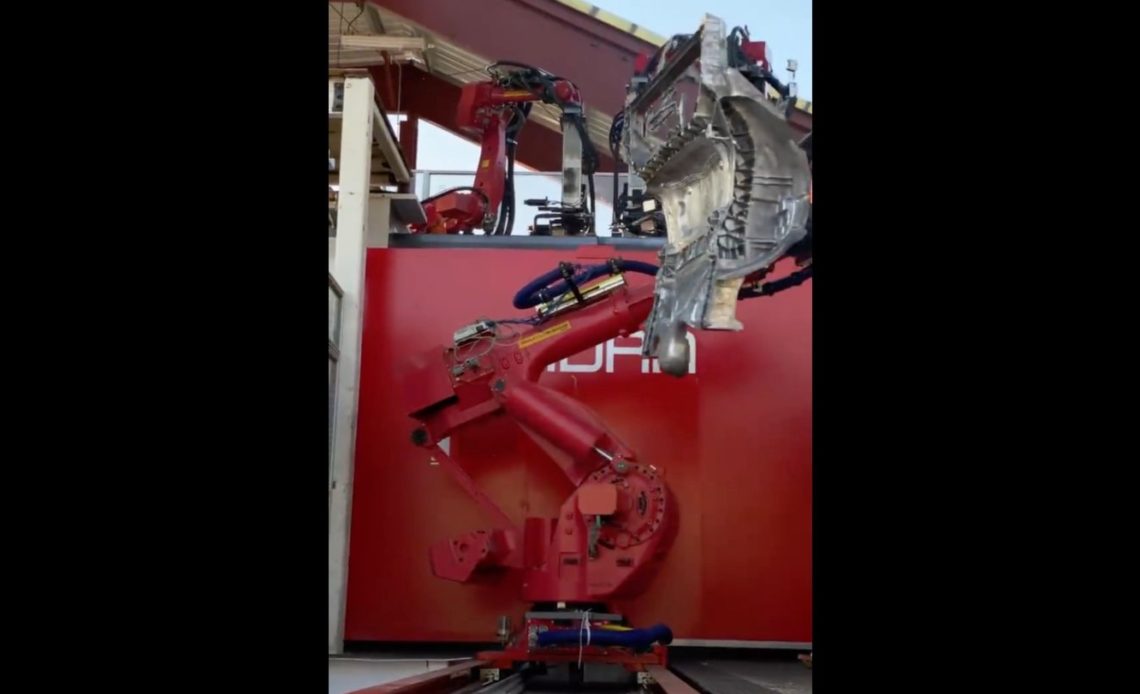 Tesla has released impressive new footage of one of its robots pulling a still smoking large casting part from one of its Giga Press machines.

This new casting approach from Tesla is going to be critical for the future of the company and especially new vehicle programs like the Cybertruck.

Over the last few years, Tesla has been heavily investing in casting and alloy technology to enable larger casted parts that have the capability to greatly simplify manufacturing.

The company acquired several units of the biggest casting machine in the world. These giant, multimillion-dollar machines are developed by Idra. Tesla’s first Giga Press, which was installed at the Fremont factory, was put into operation in 2020. The machine was the first of its kind at the time and has a clamping force of 55,000 to 61,000 kilonewtons (5,600 to 6,200 tf).

Tesla has already been producing the Model Y with a single rear body piece that replaced 70 different parts in the vehicle.

That was Tesla’s first major step into large cast parts, and the automaker has since been heavily investing in large casting technology.

The automaker took deliveries of several more giant casting machines at Gigafactory Texas, and Tesla has started producing the Model Y at the plant with both front and rear single-piece casting.

This approach has greatly simplified Tesla’s body shops – bringing the number of robots per unit of production capacity down significantly:

To get a better understanding of how this casting technology works, Tesla has released an impressive new video of one of those giant cast parts coming out of the Giga Press:

You can see the single part, which is basically one-fourth of an entire car body, still smoking after coming out of the press.

Now Tesla is going all-in on the giant casting technology.

Earlier this year, Idra was teasing a new 9,000-pound Giga press that will take the prize as largest in the world. Considering Tesla’s relationship with Idra, it was rumored that the new machine (pictured below) would be for the automaker again.

Tesla CEO Elon Musk has since confirmed that the machine is going to be used for the Cybertruck body at Gigafactory Texas.

Since Tesla has been moving in that direction, several other automakers have reportedly reached out to Idra and other casting machine makers to do the same.

However, Tesla is believed to have a significant advantage since it has been both working on this technology for a long time and also developed new alloys to work better with larger cast parts.