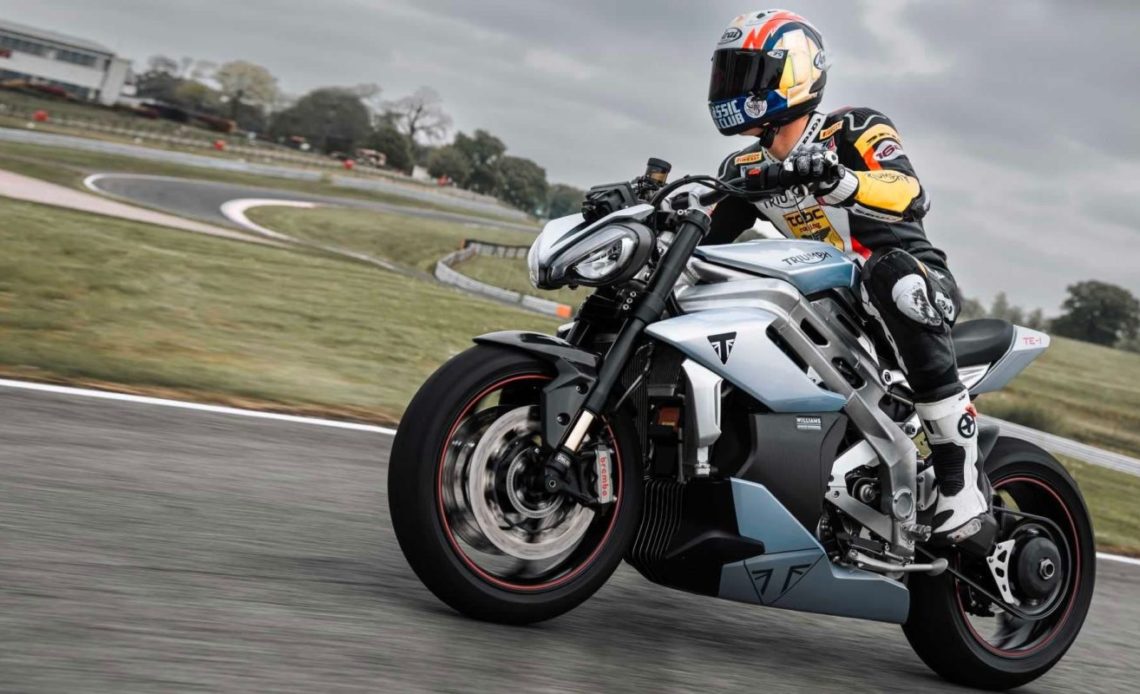 Now Triumph has made enough progress that it is finally ready to spill the beans on the most important performance specs on consumers’ minds.

The Triumph TE-1 appears to be coming out of the gate swinging, boasting an impressive 175 hp of peak power, which translates to around a 130 kW peak rating for its electric motor.

Keep in mind that the power figure floated by Triumph is almost certainly an unrealistic number that is based on peak electrical draw, not true output power.

So we’re not sure what’s going on over at Triumph, unless they’ve dumped all their power into high speed instead of high torque, but we’re keen to find out.

Moving on, Triumph tells us that the TE-1 will offer 100 miles of range (160 km), but doesn’t elaborate on city vs highway range or provide an exact capacity figure for the battery pack.

We did learn that the battery should be capable of a 0-80% recharge in 20 minutes, implying DC fast charging capabilities.

Regenerative braking will also help charge the battery during deceleration.

The bike is expected to be fairly portly at 485 lb (220 kg), but that will still fall far below the weight of other leading electric motorcycles like the LiveWire One at closer to 550 lb (250 kg).

The performance figures released by Triumph were gleaned from recent on track testing, with rider Brandon Paasch concluding from the experience:

“The throttle response on the TE-1 is kind of incredible, it’s very torquey and when you first touch the throttle it’s instant power, which is obviously what I love as a motorcycle racer – I love when it’s super-torquey and picks up right away, so for me it was a really great experience. I got to peg this thing all the way from zero to 100% throttle and it’s unbelievably quick, it pulls like crazy.”

It’s not yet clear what a potential path forward to production would look like for Triumph. We had expected to hear more details about the electric motorcycles’ potential production plans, especially with the company this far into prototype testing. But Triumph has been silent regarding production news, leading to speculation regarding whether the TE-1 will actually make it to the road.

At the same time, other legacy motorcycle manufacturers are stepping up their electric motorcycle games, even if they aren’t reaching production yet either. Ducati has made impressive progress on a racing electric motorcycle for the FIM MotoE electric motorcycle racing championship and has already confirmed that the bike will be used to develop a consumer-level electric sport bike, though hasn’t provided a solid timeline.