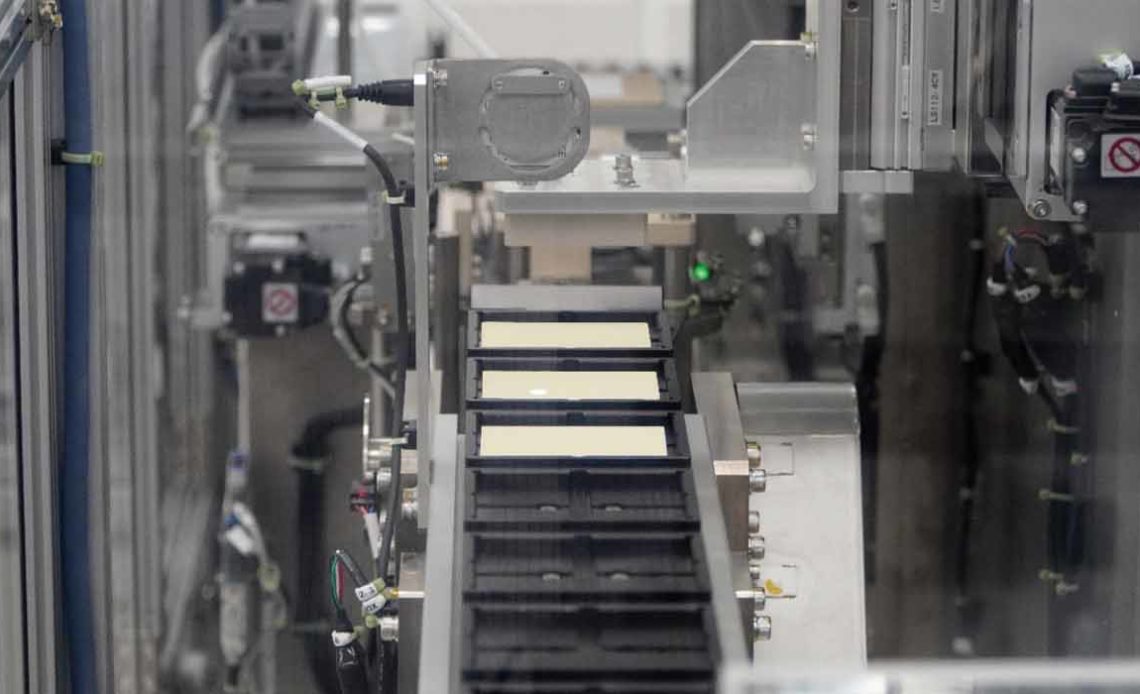 Solid-state battery manufacturer Quantumscape has released its second quarterly report for 2022, updating the public to its progress in scaling affordable, energy dense cells for future EVs. The company continues to expand the amount of layers possible in its solid-state cell technology, while simultaneously preparing for scaled assembly for a growing list of OEMs. Here’s the latest.

QuantumScape ($QS) is a battery technology company founded in 2010 with the goal of developing scalable, effective solid-state batteries that can (hopefully) reach cost parity with traditional lithium-ion cells.

Although it has been working for over a decade, the battery developer really started gaining momentum in 2020 when it announced it had reached a “major breakthrough” by utilizing a ceramic separator. This lead to the successful testing of single-layer prototype cells. After doubling the size of its initial pilot manufacturing line, Quantumscape revealed it had also developed 10-layer cells, followed by a 16-layer prototype.

This past February, QuantumScape shared another industry first with a single-layer cell that completed 400 consecutive 15-minute fast-charge cycles, replenishing from 10% to 80% capacity while still retaining over 80% of its initial energy.

Now, Quantumscape has revealed a 24-layer cell as well as a slew of other updates.

Quantumscape has come right out of the gate swinging, announcing yet another layer to its solid-state battery cell development… eight more to be precise.

According to the Q2 2022 report, Quantumscape has successfully developed 24-layer prototype cells, which are already enduring testing. The new solid-state cell also represents a new design format. The company explains it best:

The 24-layer prototype cells we’ve made were packaged in a variety of formats, including early variants of the proprietary format we are developing, designed to accommodate the expansion and contraction characteristic of lithium-metal batteries during charge and discharge (resulting from plating and stripping of lithium metal). As part of our development work, we have built and tested many cells of varying layer counts in this new format, including some that have achieved over 600 cycles and are still cycling.

These first 24-layer prototype are labeled Sample A cells, representing the beginning of a three step journey toward automotive qualification and eventual production. Each major sampling stage (A,B, and C) will consist of several generations of maturing cell prototypes which will be delivered to OEMs for testing and validation.

When Sample A deliveries begin this year, Quantumscape expects about 18 months to pass before it can deliver Sample B cells using low-volume production processes. The company says it anticipates a similar timeframe between Sample B and Sample C prototype cells, and a number of factors within QS as well as its OEM customers can certainly influence those targeted timeframes.

In the report, Quantumscape is touting a recent improvement to its separator manufacturing process – a change that results in higher uniformity than its current baseline process, which has already delivered industry-leading performance results (800 cycles under gold-standard testing conditions
and repeated 15-minute fast charging at 25 °C).

The company has also developed a second-generation catholyte, which is the ion conductor in the cathode of Quantumscape’s cells. It is expected to offer better low-pressure performance, improved low-temperature behavior, better high-rate support, and improved cell reliability compared to its first-generation.

Last but not least, QS has shared an update to its ever-expanding manufacturing processes for solid-state cells. During Phase 1, the company has been working to improve the quality and consistency of separator production, but now looks to apply that same engineering strategy to the cells themselves in Phase 2:

As part of bringing Phase 2 online, this quarter we took delivery and completed qualification of several key tools. Notably, we have completed site acceptance testing on our first-generation automatic cell stacker, which automates the first step of the cell build process. This new tool is designed to improve throughput; a step that previously took more than five minutes can now be accomplished in approximately 30 seconds. Consistency is another benefit of automation; a properly configured and maintained piece of automated equipment can perform the same operation repeatedly with low variation from run to run, which can improve cell quality.

Quantumscape has achieved a peak of over 5,000 weekly separator film starts this quarter, but still has its sights set on achieving 8,000 weekly starts before year’s end.

Lastly, QS shared that it has been working closely with major investor Volkswagen Group, but has announced two additional sampling agreements with OEMs in the automotive space. Out of respect for those companies, QS has not shared who they are yet, but should in the future.

We do know the two additional OEMs bring Quantumscape’s total to six potential customers – all of which are “global top-10 manufacturers by revenue to premium performance and luxury automakers, encompassing both pure EV and conventional OEMs.”

Looking ahead, Quantumscape remains focused on delivering a 24-layer A sample to an automotive customer this year. That’s all for now, until next quarter!