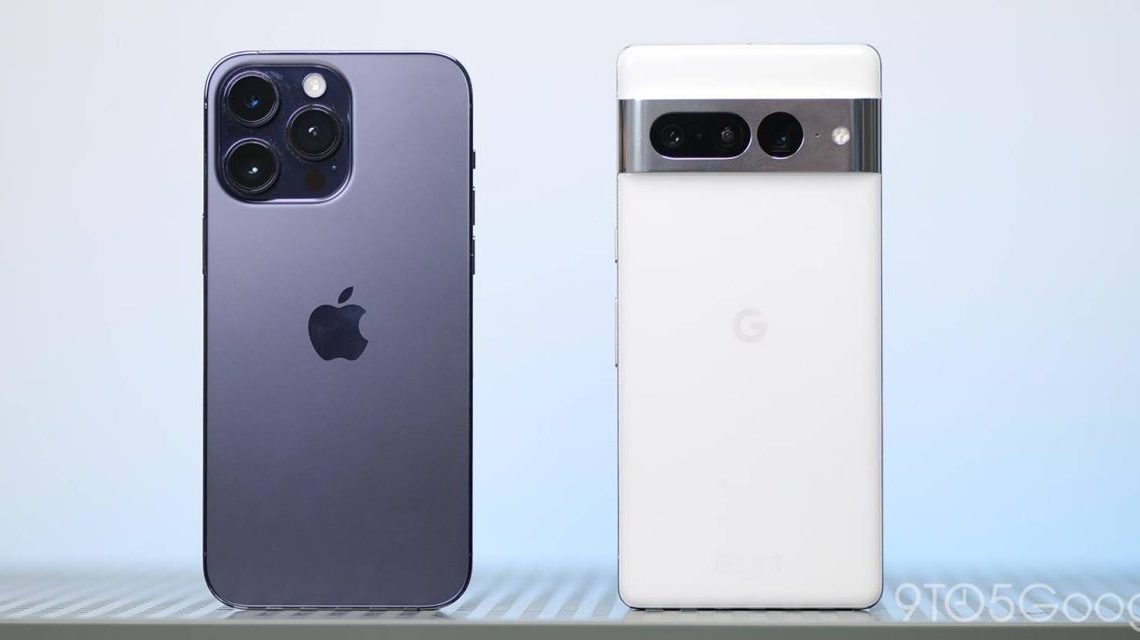 Whether it’s intentional or not, over the past few years Google has been following a tried and true path first taken by Apple when it comes to its smartphone endeavours. The Pixel 7 Pro and iPhone 14 Pro Max are similar devices but how do they stack up? Here’s everything you need to know.

Comparing Android to iOS is not always like-for-like. That said, the differences between the daily experience on Pixel and iPhone are about as close as it gets when comparing two fundamentally different software and hardware ecosystems. It’s with good reason that the Pixel lineup is often referred to as the “iPhone of Android.”

We’re less inclined to agree with that statement, but we would agree that for iPhone users making the jump, Google’s smartphone lineup provides the most seamless transition.

Visually it’s easy to tell this duo apart from afar. Google and Apple’s design languages are very different. Despite clear aesthetic differences the 2022 flagship Pixel and iPhone are heavy, hulking handsets. As premium hardware, glass and metal dominate. For the iPhone 14 Pro Max, stainless steel is used on the frame while the Pixel 7 Pro has an aluminum chassis.”

The iPhone 14 Pro Max shares a familiar aesthetic and design principles with past devices. The only majorly notable differences are a slightly larger camera layout at the rear, plus the removal of the display notch in favor of a punch-hole or “Dynamic Island” as it has been styled.

Google reinvented the Pixel series with its “Camera bar” design, and the Pixel 7 Pro has a refined version of last year’s model. It’s very different to most smartphones you can already buy. This centrally positioned camera system is a nice touch.

The signature “Deep Purple” color is the standout for the iPhone 14 Pro Max, but the matte frosted glass with glossy side rails is a strong look. My personal favorite is the “Space Black” variant, but it’s hard to deny that the Pixel colors are a little lackluster this year compared to the colorful array of options used in the past. That said, the “Hazel” color Pixel 7 Pro is a striking option. It’s a shame that Google stuck with glossy finishes this time.

This doesn’t matter when you throw a case on either phone. Because the Pixel 7 Pro is almost 30g lighter than the iPhone 14 Pro Max, the addition of a case is not quite as pronounced. Some of this increased mass is likely due to the usage of stainless steel which is heavier than aluminum.

This duo ships with 6.7-inch displays and both are truly excellent 120Hz AMOLED panels. In many ways, the iPhone 14 Pro Max has an undoubted edge (literally and figuratively) as its screen is completely flat. Curved edges dominate the Pixel 7 Pro, and while Google has reduced this when compared directly to the Pixel 6 Pro, there are usability drawbacks.

Visually, the screen curves look great. In practice, it’s hard to deny that flat screens just work better with gesture-based user interfaces. That’s true here. Apple calls their screen the “Super Retina XDR display,” but even with this branding if you care about pure resolution, the Pixel 7 Pro’s higher fidelity QHD+ screen offers greater pixel density, but this is less pronounced when side-by-side.

There is also the inclusion of a huge in-screen punch-hole on the iPhone that Apple has rebranded as “Dynamic Island.” It is a large and sometimes distracting inclusion. That said, it has been integrated into the software with first-party applications and even a growing number of third-party apps, like media players and more.

The “Dynamic Island” also is home to impressive and accurate 3D face scanning tech. This is more secure than the software-based face unlock added to Pixel 7 Pro, but the improved in-display fingerprint scanner means you don’t need to look at your phone to securely unlock.

Maximum brightness levels are similar on paper, but the iPhone 14 Pro Max has a minor bump here over the Pixel 7 Pro. In daylight conditions, the boosted peak brightness on iPhone is far better. The Always-on display implementation by Apple is awful even with some recent changes and pales in comparison of the all-powerful At a Glance widget that you’ll find on Pixel 7 Pro.

Over the years, Android and iOS have inched closer together in terms of functions and features. That said, with the Android 12 release things have become more pronounced from a visual and identity standpoint.

The iPhone 14 Pro Max is the poster child for Apple’s vision of iOS. It’s simple, well-defined, and remains familiar as little has truly changed since gesture-based navigation was introduced with the iPhone X in 2017. That could be considered a positive and a negative depending on how you feel about your tech.

Conversely, Material You has fundamentally changed how Android looks and feels. Wallpaper-based theming is at the very core of the Pixel 7 Pro. Usability is also at the forefront with unique functionality that you’ll only find on Pixel. Now Playing, At a Glance, plus Tensor-powered functions like real-time translation and useful camera tools are the tip of the iceberg.

The oft-cited “Apple ecosystem” is one of the biggest pulls of the iPhone series. Services like iMessage, FaceTime, and AirDrop are certainly important to many users. That said, Android is closing the gap with RCS in Google Messages, integration with Meet, and even Nearby Share between ChromeOS and Android devices. Machine-learning functionality is where you’ll see the most prominent additions on Pixel. This is something that is lacking on iPhone and iOS despite its strong areas.

From an Android user perspective, the way iOS handles customization is a big step forward but still very inhibiting. Another downgrade is in how notifications are managed within iOS. Bundled notifications are cumbersome and Android 13 feels lightyears ahead in this regard. It is true that notifications arrive faster on iPhone on a consistent basis.

Without delving into a direct comparison of iOS 16 and Android 13, the two operating systems are both clean and concise. It is true though that the potential update timelines for the duo are very different. Apple’s support window is not set in stone. With past models often receiving seven or eight years of regular updates, we’ve wagered that at least five years of OS upgrades are likely within its lifecycle.

Google will offer five years of support for the Pixel 7 series, but this becomes limited after three years. Android 16 is set to be the final OS version offered via official means. Regular monthly security patches are set to be provided for the final two years.

When comparing the under-the-hood power at the disposal of each smartphone, it’s an absolute no contest. Apple’s 4nm-based A16 Bionic processor is, simply put, the best mobile processor available today. While the Tensor G2 processor is solid, it’s not even the best Android chipset. It’s still capable and runs all apps and most games at medium-to-high settings.

RAM management on iOS is excellent despite the much lower 6GB RAM allocation versus the 12GB RAM allocation on the Pixel 7 Pro. Credit where it is due, it’s hard to deny just how well-optimized the system is. Google has closed the gap, but there is still a long way to go.

Another area in which the Pixel 7 Pro is better on paper than the iPhone 14 Pro Max is in the battery capacity and charging capabilities. Where the iPhone lacks, it makes up for in its efficiency and power consumption. It could be that the 5,000mAh battery in the Pixel 7 Pro has a slightly higher resolution screen to drive, but it’s well known that Android is poor when compared to iOS for power management.

In our experience, the Pixel 7 Pro is an all-day phone with solid battery life. The iPhone 14 Pro Max is a battery beast in comparison, with medium- to light-usage you could easily get two days of usage. A lot of variables are at play, but it’s hard to deny that Apple is still the market leader here even despite apparent lifespan decreases over its predecessor.

When talking about the camera systems, the Pixel and iPhone have fairly similar setups, but the major difference is how they are honed and tuned. The Pixel 7 Pro does not have the latest and greatest camera hardwar,e but it’s finely calibrated and backed with exceptional algorithms.

Excellent 30x zoom is now available on Pixel and at all zoom lengths, giving the improved Super Res Zoom an undoubted edge. That’s not to say the iPhone 14 Pro Max has bad zoom – which system you prefer will boil down to what “style” you prefer. Apple tends to prefer natural, less processed images. Google tends to skew towards contrasty stylized photos with sharp, precise details.

Where the Pixel reigns supreme is in skin tone exposure. Apple needs to seriously work on this in future, as Google’s Real Tone processing means that everyone gets accurate skin tone exposure in all camera modes. Apple ProRAW offers the ability to tweak and tune images beyond what is capable with conventional RAW images – something the Pixel 7 Pro supports – but for regular folk this is not necessarily worth the hassle.

Pixel also handles moving subjects better than any other device. This is especially important when you want to quickly capture moments that you might otherwise miss. Features like Top Shot mean you can even pick the best picture of a bunch in that scenario, too. For simple point-and-shoot smartphone photography, the Pixel really does excel.

If we discuss video and mobile videography, there is simply no contest when comparing the Pixel 7 Pro and iPhone 14 Pro Max. Apple’s prowess with video recording remains unrivalled with ProRes support, no recording limits, and more. Google has honed and fine-tuned its video recording capabilities with one unique trait that lets you switch between all of the rear camera sensors when recording 4K 60fps.

Pixel 7 Pro vs. iPhone 14 Pro Max: Which should you choose?

Choosing between the Pixel and iPhone is not going to be difficult for most people. If you like iOS, then it’s the iPhone 14 Pro Max all the way. If you prefer Android, then the Pixel 7 Pro is one of the best phones you can buy right now. If you’re on the fence, it’s a tough choice, and it’ll depend on what you need from your device. Do you heavily use Apple services or require iMessage access? If so, then you’ll want an iPhone.

For the price, the Pixel 7 Pro offers a lot given it comes in around $200 less than the iPhone 14 Pro Max. It’s the best Pixel to date with no real compromises. In recent years, the gap between Apple’s best and Google’s best felt pronounced. This year, it’s closer than ever, and it bodes well for future releases. If you do want an Android phone the Pixel 7 Pro makes an excellent case for selection. That said, you’re reading an Android-focused site, and you’ve likely already made your choice.

Where to buy Pixel 7 Pro

Where to buy iPhone 14 Pro Max