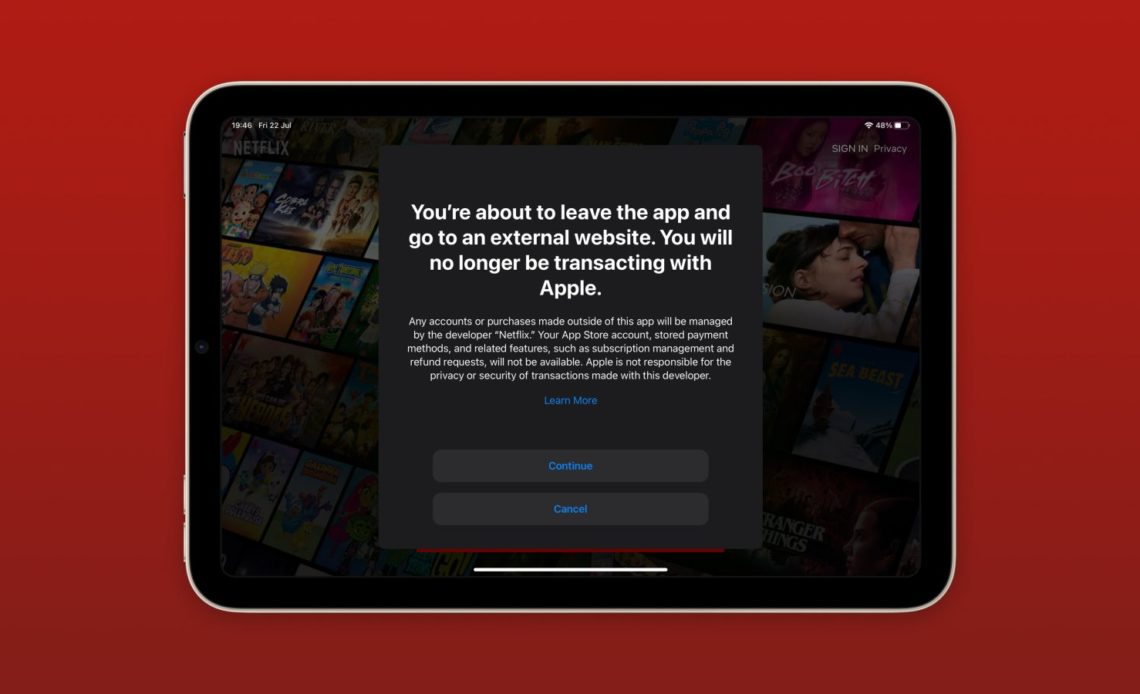 Earlier this year, Apple began allowing “reader” apps to provide external links for customers so they can log in and pay for a subscription from outside the App Store. Now Netflix is rolling out an option in its iOS app that takes users to its website in order to finish a new Netflix subscription.

As noted by multiple users and also confirmed by 9to5Mac, the Netflix app now uses the new iOS API for reader apps that takes the user to an external website before making a subscription. It’s uncertain when exactly Netflix began rolling out this option to iPhone and iPad users, but based on reports, the rollout now seems to be worldwide.

When you tap the subscribe button, a message says that “you’re about to leave the app and go to an external website.” The app also notes that the transaction will no longer be Apple’s responsibility and that all subscription management should be done under Netflix’s platform.

Any accounts or purchases made outside of this app will be managed by the developer “Netflix.” Your App Store account, stored payment methods, and related features, such as subscription management and refund requests, will not be available. Apple is not responsible for the privacy or security of transactions made with this developer.

Tapping the Continue button takes you to the Netflix website where you can enter your personal data, choose a payment method, and subscribe to a Netflix plan. This, of course, allows Netflix not to pay the 30% commission for each subscription made within iOS apps, which is reduced to 15% for recurring subscriptions after one year.

It’s worth noting that Apple considers reading apps to be those that offer digital content such as magazines, newspapers, books, audio, music, or video as the main functionality of the app.

Despite this update, Netflix had ditched in-app subscriptions long ago. Back in 2018, the company released an update to its iOS app that removed the option to let users subscribe to Netflix directly from its official iPhone and iPad app. Unsurprisingly, Apple tried to stop Netflix from redirecting iOS users to subscribe to a Netflix plan using Safari.

Due to recent antitrust investigations, Apple has finally allowed some types of apps to offer alternative subscription methods outside of the App Store without having to pay a commission to the company. More recently, Apple has also been forced to allow App Store apps to provide third-party payment methods in some countries such as the Netherlands and South Korea.

The Netflix app for iOS is available on the App Store. Have you seen the new subscription prompt? Let us know in the comments below.