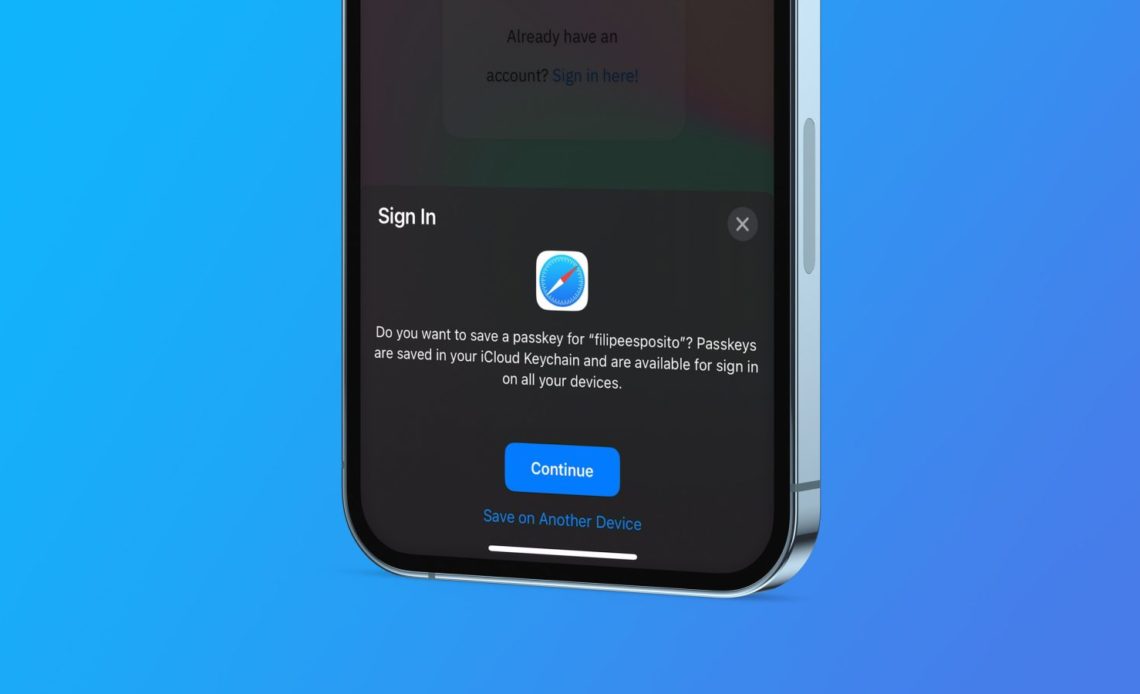 One of the most interesting features coming to iOS 16 is Passkeys. This function wants to kill the password as users would only need to authenticate a login with their face or fingerprint. Although Passkeys won’t launch with iOS 16 later next month, Apple gave a hands-on of this passwordless future in a new interview.

Here’s how Passkeys will work with iOS 16, as previously reported by 9to5Mac:

For users, sign-in with a passkey will work pretty much the same as a sign-in using iCloud Keychain and Face ID or Touch ID. You just choose a credential, authenticate with biometrics, and that’s it. However, while iCloud Keychain basically auto-fills your username and password into regular text fields, a passkey goes far beyond that.

The system generates a unique key that can only be accessed with user authentication via Face ID or Touch ID. This prevents malicious websites from trying to steal your passwords since passkeys are securely stored in the iCloud Keychain and are not visible to the user.

To Apple VP, passwords can be like a mixed bag as they are “key to protecting everything we do online,” but they’re also “one of the biggest attack vectors and security vulnerabilities users face today.”

With iOS 16’s Passkeys feature, Apple claims it could be able to solve this.

“Face ID and Touch ID verification give you the convenience and biometrics we can achieve with an iPhone. You don’t have to buy another device, but also you don’t even have to learn a new habit,” said Darin Adler.

One of the reasons why users could be skeptical is about the cross-platform experience, since what should a user do when you need to log in to a set-top box that it’s not an Apple TV or even when on a Windows/Android device? Here’s how Apple plans to solve it:

The cross-platform experience is super easy,” said Night. “So say you’re someone who has an iPhone, but you want to go and log in on a windows machine. You’ll be able to get to a QR code that you will then just scan with your iPhone and then be able to use Face ID or Touch ID on your phone.”

Tom’s Guide says Apple is currently working with developers to integrate Passkeys support into their apps, although the company could share which apps will be available at the launch. You can take a look at the full interview here, as well as some exclusive images of the Passkeys feature in action here.

Are you excited to try this feature? Share your thoughts in the comments section below.