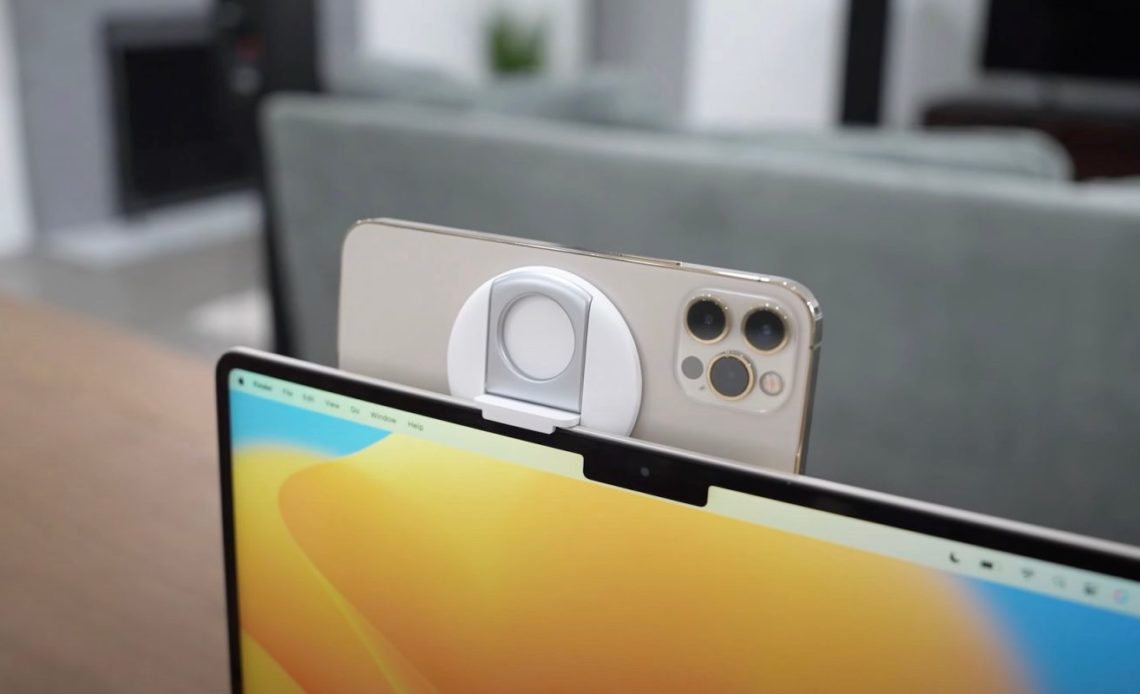 When Apple announced Continuity Camera in iOS 16 and macOS Ventura at WWDC, it showed off accessories from Belkin that will make it easy to mount your iPhone to the top of your Mac’s display. Those accessories aren’t yet available for purchase, but some early hands-on videos have hit the web this week showing Belkin’s MagSafe mount for Continuity Camera in the real-world.

What is Continuity Camera?

Continuity Camera is a new feature in iOS 16 and macOS Ventura that lets you use your iPhone as a webcam for your Mac. The feature works completely wirelessly, connects automatically, and works with any video calling app on your Mac.

As we’ve covered in-depth, the feature is incredibly impressive and offers a major jump in video quality compared to Apple’s built-in Mac webcams. The setup process is seamless, with your iPhone automatically connecting when you open a video app like FaceTime or Zoom on your Mac; there’s even a Desk View feature that shows an overhead view of your desk as well.

To enhance the Continuity Camera experience, Apple has teamed up with Belkin to create multiple different options for mounting your iPhone to the top of your Mac. New videos posted to YouTube this week by Brian Tong and ZolloTech offer an early real-world look at a Belkin accessory that uses MagSafe to mount your iPhone on your Mac.

Belkin’s accessory looks very impressive in these videos – you simply snap the mount to the back of your iPhone, then use the built-in clip to attach it to the lid of your MacBook. The clip looks relatively small, which presumably means this will only work on MacBooks, not thicker displays like the Studio Display or iMac.

It’s particularly impressive that the weight of the iPhone doesn’t cause issues for the lid of the MacBook, given how thin and light Apple’s MacBook displays are. The videos show the Belkin MagSafe mount securely holding the iPhone at the perfect angle for video calls and Desk View.

There’s still no word on when Belkin’s Continuity Camera accessories will be available, but we’d anticipate a release sometime this fall once iOS 16 and macOS Ventura are available to the public.

In the meantime, there are some iPhone desk mounts on Amazon that should work nicely for Continuity Camera as well.