Hands-on: The OnePlus 10T is a Pixel 6 where performance matters over everything else 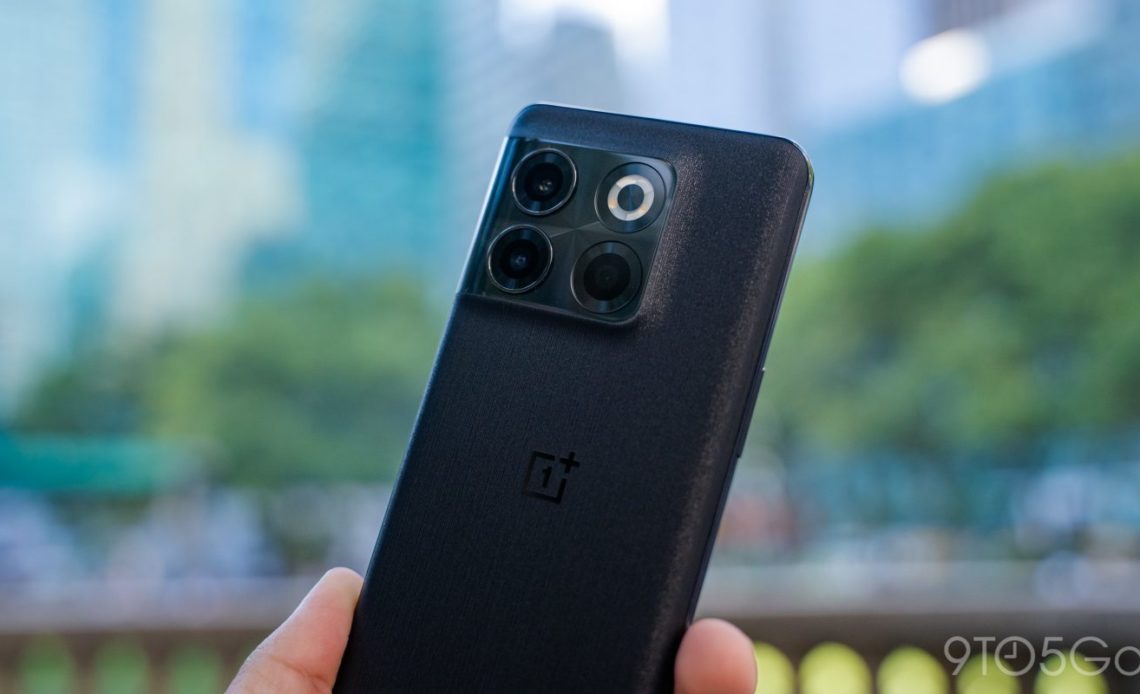 The OnePlus 10T just went official as the brand’s fastest charging smartphone to date. We’ve had a few days to play around with the OnePlus 10T – here’s what we’ve thought so far.

Yup, this is very much a OnePlus phone

But there have been some notable changes. The OnePlus 10T ditches the Alert Slider that has been an iconic part of OnePlus smartphones for years now. That feature isn’t gone for good, but its missing presence is certainly felt here, and I haven’t felt like the additional antennas are a worthwhile trade-up. Though, I will say that signal strength has been fantastic on Google Fi so far.

The software also still feels distinctly OnePlus, but that’s not really as much as of a compliment as it once was. OxygenOS 12.1 feels fast and smooth, but it often feels that way at the expense of information density and overall usability. Something about OxygenOS just feels foreign to me – perhaps because it shares so much in common with ColorOS nowadays.

At least the screen is pretty nice.

As most would expect with a Snapdragon 8+ Gen 1 and 8GB of RAM, this phone flies. It consistently outperformed my Pixel 6 Pro across the board, and after adjusting to a few things, I felt pretty much at home.

While there’s certainly been some good, there have been a fair share of frustrations so far as well. It baffles me that the 10T completely lacks wireless charging. OnePlus told us that the dual-cell battery on this phone – basically the same technology that the OnePlus 9 Pro and 10 Pro also used – restricts the ability to use wireless charging, but the brand didn’t offer any further details on exactly why this is the case.

The other major frustration I’ve had is that this phone, at least in its “Moonstone Black” variant, is far too slick. It’s virtually impossible to use this phone for any length of time without a case, which is incredibly annoying to say the least. Cases are something most of us use regardless, but phones shouldn’t require a case at all times.

As you’d expect based on that number alone, charging speed is quite ridiculous. It takes barely 20 minutes to fill the phone from 1% to 100%, and it’s admittedly something that’s very cool to watch.

Is it a big deal to lose 25W using the phone in North America? In short, absolutely not. Fast charging has been hitting on the law of diminishing returns for a while now, and there’s quite literally a one-minute difference in charging speed between 150W and 125W.

Personally, I also didn’t feel it was a particularly big loss because the battery life is so good. Not once did I have a dead phone by the end of the day, regardless of how hard I pushed the device. I never really needed to use the full-speed charging, and was perfectly happy using the 30W charger I already had next to my bed.

In theory, this is a phone you could charge like a smartwatch – plug it in while you’re in the shower, and forget about it until the next day. Concerns about battery health are surely well-founded given the speeds at play here, but OnePlus is doing its part in the software and in the hardware to keep the phone going over the long-term.

I’d rather have the 65W charging from the OnePlus 10 Pro, which still offer a 50% charge in 15 minutes, while also getting the option to drop the phone on a wireless charger at night.

A Pixel 6 from another reality

The one thing I kept coming back to with the OnePlus 10T is how it compared to my experience with the Pixel 6. The two phones share roughly the same price bracket, with only $50 separating them. And really, they both have attractive aspects. OnePlus has stronger specs when it comes to performance, Google has longer and faster Android updates. OnePlus has a bigger, better display, while Google has a much better camera.

Where I think Google wins out here is when it comes to where the two phones are placed.

Especially in the US market, Android smartphones generally fall into a few camps, as I had been discussing with our Max Weinbach.

There are the budget phones that carriers give away like candy – like the OnePlus Nord lineup. These are the phones that can be light on features and quality because, at the end of the day, people just want them to work, and do the basics.

Then, there are the mid-range phones that have affordable payments, or that people buy outright – like the Pixel 6a. These phones need to do their best to emulate a “flagship,” with good cameras and good screens, but they can still compromise on some “premium” features because, really, they are meant to be more affordable.

And finally, there are the high-end phones. The Pixel 6 Pro, the OnePlus 10 Pro, Samsung Galaxy S22, and of course the iPhone. These phones need to offer the best of the best, from their cameras to their features, with excellent screens, top-tier cameras, wireless charging, and water resistance being basically requirements. And these are some of the only phones that can get away with selling unlocked in large quantities in the US because they have the enthusiast market in a big way.

The Pixel 6 fits into the top two categories at $599. It’s cheap enough to where many can still afford it on a limited budget, and it’s attractive compared to phones that cost around $400-500 because it gets a lot closer to a flagship without going all of the way.

But the OnePlus 10T doesn’t really fit into any of these camps. It’s a little too expensive to compete with mid-range phones, and a little too light on features like wireless charging and a proper water resistance rating to be considered a flagship. In my early tests so far, the camera is also far subpar in anything but the most ideal conditions, with incredibly aggressive HDR. The 50MP main camera has higher resolution than the OnePlus 10 Pro, but is a worse sensor on the whole, and software hasn’t made up the gap. Plus, it still retains a useless 2MP macro camera that serves no actual purpose beyond buffing up the spec sheet.

The new $799 price point of the OnePlus 10 Pro only further complicates matters.

And yet, it feels like the OnePlus 10T fits a very specific niche – it’s the Pixel 6 of phones that are focused on performance over all else. Gaming phones are cool, but many of the ones sold in the US cost upwards of $1,000, and $649 for the 10T makes it a great value in that one, very specific regard.

Ultimately, I don’t think the OnePlus 10T will be a major hit in any capacity, but it’ll probably please the people it appeals to.

We’ll have a full review of the OnePlus 10T in the coming weeks, and the phone will be available in the US on September 29 for $649.