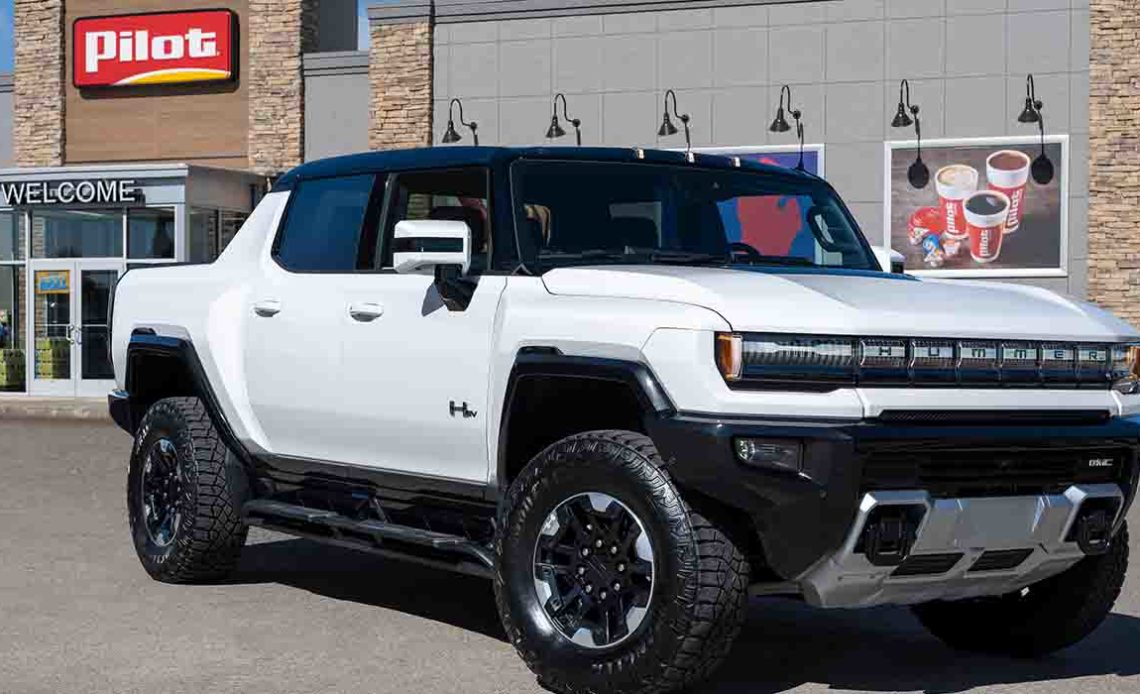 General Motors (GM) has announced a collaboration with Pilot Company to implement a coast-to-coast DC fast charging network co-branded with both the “Pilot Flying J” and “Ultium 360” logos. The new charging network will be powered by EVgo’s eXtend charging services for businesses.

GM first established its EV charging presence in 2020, alongside an agreement with charging network EVgo to deploy over 3,200 chargers across the country by 2025. A year later, EVgo joined GM’s Ultium Charge 360 program, which combines several networks into one holistic system.

This platform was extended to GM’s commercial fleet customers last summer as well. Just last month, GM continued to grow its relationship with EVgo by announcing the addition of Plug and Charge capabilities to its newer EVs using the charging network.

In addition to the Ultium Charge 360 program, GM is now launching a new coast-to-coast DC fast charging network in the United States across hundreds of Pilot and Flying J stations, along with some more help from EVgo.

GM and Pilot’s charging network will be powered by EVgo.

GM shared details of its plans for a new nationwide charging network in a press release today, explaining how both Pilot Company and EVgo are involved. General Motors and Pilot Company will collaborate to establish the DC fast charging network that will initially consist of 2,000 stalls across 500 Pilot and Flying J travel centers near major highways.

Each of the charging piles on the network will don “Pilot Flying J” and GM’s “Ultium Charge 360” branding and will offer charge speeds up to 350 kW. EVgo will assist in the charger installations, operations, networking, and maintenance – all through its eXtend business division. Pilot Company CEO Shameek Konar spoke about the collaboration with GM:

GM and Pilot Company designed this program to combine private investments alongside intended government grant and utility programs to help reduce range anxiety and significantly close the gap in long-distance EV charger demand. Our travel centers are well-equipped to accommodate EV charging with 24/7 amenities and convenient proximity to major roadways across the country. We look forward to collaborating with GM and the US Department of Transportation to make convenient coast-to-coast EV travel a reality through our national network of travel centers.

Although Pilot is still very much in the fuel business, the company has had the foresight to prepare for the EV revolution that’s just starting to reach its tipping point in the United States. As part of its New Horizons program, Pilot Co. has committed $1 billion toward an overhaul of all its locations, adding features like free WiFi, expanded seating and lounges, new restaurants, and shopping.

Beginning almost immediately, the network of GM branded DC fast charging stalls will be implemented at each of the 500 Pilot and Flying J locations in the United States. Although the chargers will be available to all EVs equipped for fast charging, GM explains that its specific customers will receive special benefits:

During a conference call with the media, EVgo CEO Cathy Zoi shared that charger installations for the new GM network will begin immediately, with the first stalls expected to be operational in early 2023. According to Zoi, the bulk of the installations will be completed between 2023 and 2025.

GM did not share any financial details of its collaboration with Pilot Company or EVgo to implement the new charging network. The network will only serve the United States, but GM relayed that a network addition specific to Canada is also in the works and that those details will be shared at a later date.