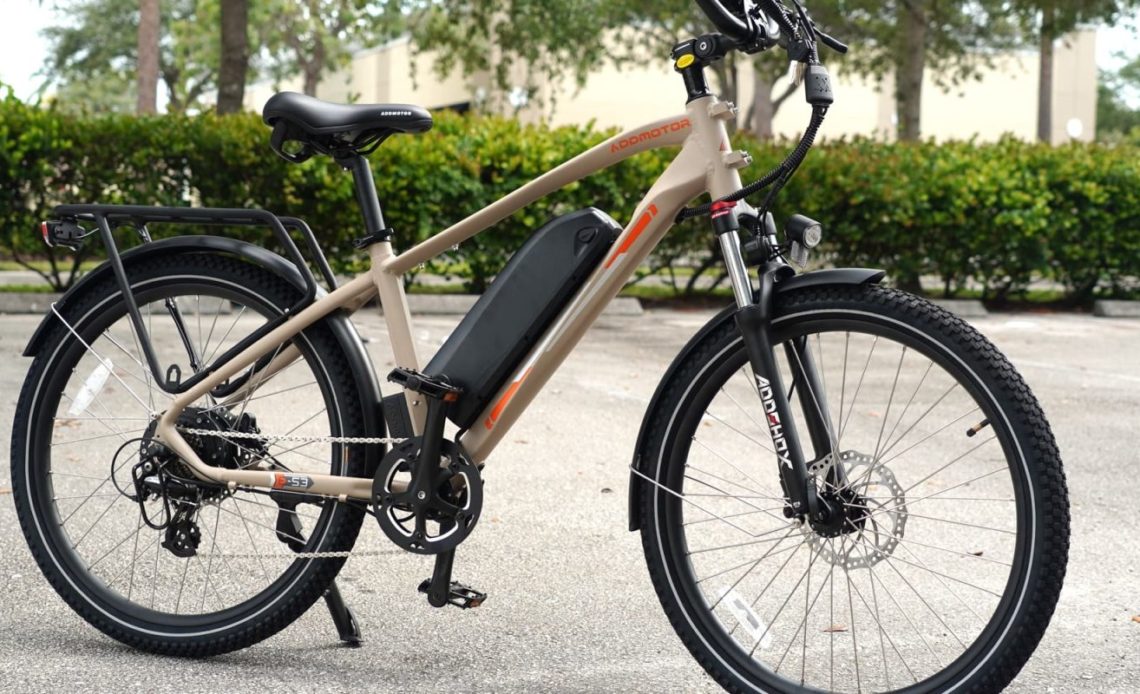 When Addmotor unveiled its E-53 City Pro electric bike recently, it showed off one of the biggest batteries in the industry: 48V and 20Ah of capacity for a nearly 1 kWh of energy between the rider’s knees. But the bike wasn’t only about big batteries and long range. It also included a number of commuter-worthy features and components designed to turn the electric bike into an ideal everyday runabout electric bike.

The obvious big draw to this e-bike is its massive 960 Wh battery. That is well above average these days, especially considering that the bike still comes in at .

Addmotor tells us the bike can go 125 miles on a charge, though if you read the fine print then you’ll discover that range is only possible at 8 mph (13 km/h) in pedal assist level 1 on flat ground with a lower than average weight rider.

That’s still quite good, and is a testament to just what can be achieved with a big ol’ battery. I have other commuter e-bikes that have half as much battery and I struggle to achieve 20 miles of range. So getting 40-45 is a huge step up in the e-bike industry.

There’s more to this story than just a big battery though. The E-53 is also a very nicely designed commuter e-bike.

It checks my main three boxes for commuter e-bikes, meaning it comes standard with LED lights, built-in fenders, and a rear rack. And fortunately for us, all three of those parts are quality.

For the LED lights, they are reasonably bright and the rear even comes with turn signals, though I don’t know how many car drivers will notice them. At night they might slightly indicate your turning intentions, but the blinkers are so close together that I doubt they’ll make too much of a difference. This is a common issue with electric bike and scooter turn signals that are mounted close to the bike’s centerline. I’d still signal with my hands, but at least it’s a cool feature to have.

The fenders are aluminum fenders, not cheap plastic ones. That means they stay in place and have a nice rigid feel to them. If you hit a pothole, they aren’t going to shake around and flop like a fish, which is my biggest pet peeve of cheap plastic fenders.

The rear rack is also nice and sturdy. It comes with a 55 lb. (25 kg) weight rating, meaning you know they tested it to even higher levels if their lawyers let them put that figure on it. This isn’t some cheap rack for carrying one grocery bag – it could support a child or other heavy cargo easily.

The rest of the bike also sports a nice combination of components. 100 mm of travel (4 inches) is plenty for a suspension fork, and honestly is probably more than most people need for casual city riding. The 7-speed Shimano transmission is basic but acceptable for commuter use. It’s not going to win any awards for robustness, but it’s another “get the job done” type of part for casual city riders. The hydraulic disc brakes are a very nice addition to see, especially at this price point.

The Kenda tires offer a compromise of an urban tire with a checkerboard pattern that splits the difference between smooth and knobby tires. The tread itself is smooth on each square, yet the checkerboard gives you better grip if you do take it on some light trails. And with that suspension fork up front, you’ll be tempted to hit your local Rails to Trails or other nature trail route, assuming e-bikes are allowed.

Even the smaller notes like adjustable angle stem to dial in the handlebar height and a grab handle under the seat for easier maneuvering of the bike are great additions that make the Addmotor E-53 City Pro a pleasure to use.

If I could change one thing about the bike, it would probably be to boost the power a bit. Yes, the 500W continuous-rated motor actually gets closer to 900 watts of peak power, but I feel like the bike could have a bit more oomph on take off.

Perhaps they kept the power slightly more modest to eke out more range, which wouldn’t be a bad thing. But those wanting extra power might want to look for a bike with a 750W continuous-rated motor instead of a 500W power plant.

Even so, I’d say Addmotor did an excellent job designing and executing this e-bike. It’s not overly fancy, but it’s a reasonably priced commuter electric bike with a nice inclusion of parts and features.

it’s hard to say the Addmotor E-53 with its big battery, comfortable design, and proper performance aren’t worth it.