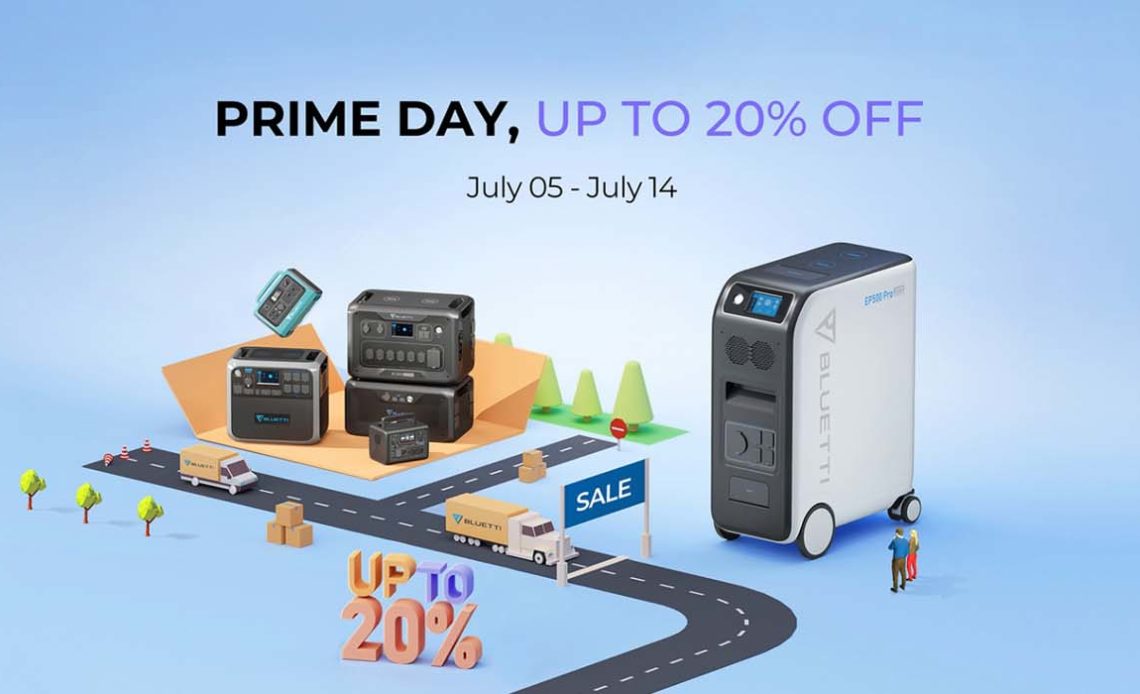 Whether it’s a new phone charger, that one specific laundry detergent you love, or a last-minute Halloween costume accessory, you’ve probably used Amazon. One of the perks of the web’s largest digital marketplace is Prime Day, a multiday sale event celebrated each year throughout the site. Veteran energy storage provider BLUETTI is joining the Prime Day celebration this year with . This list is definitely worth checking out.

On July 12 and 13, be sure to include at least one of the BLUETTI deals below in your Prime Day shopping cart. If you’re an Amazon Prime member, you can add your desired BLUETTI product directly to your cart along with the rest of your Prime Day items. Simple as that.

Not an Amazon Prime member? No sweat, BLUETTI has still got you covered. Prime Day prices are available on as well. Simply click through the product links we’ve compiled for you below.

There are a ton of deals this Prime Day, some of which are the best we’ve seen from BLUETTI all year, so we’ve highlighted some of the best of the best for you below.

AC200P: The most popular 2kWh solar generator, now at the lowest price ever

BLUETTI proudly touts its AC200P solar generator as its most cost-effective in the lineup. With an additional $100 off just for Prime Day, this portable power station offers even more value for your dollar, dropping to of only $1,499.

For under $1,500, the AC200P is worth snagging, considering you get a solar generator with a 2,000W AC pure sine wave inverter, an enormous 2,000Wh capacity, and the safest and most durable LiFePO4 battery chemistry.

Its massive capacity means the AC200P can seamlessly power everything you need – from a household fridge to an 8,000 BTU portable air conditioner – no problem! Add one of BLUETTI’s solar panels and cleanly replenish your solar generator at blistering speeds up to 700W. That means you can juice up the AC200P from zero to 100% in under 4 hours using the power of our Sun alone!

With the AC200MAX, BLUETTI has taken its tried and true AC200P and pushed it to the MAX. While the portable power station itself has been upgraded, BLUETTI has to $1,799, only during the Prime Day sale.

By adding two expansion ports, this solar generator supports the addition of either two B230 battery modules (2,048Wh each) or two B300 modules (3,072Wh each). Combined, you have the potential to bolster your energy system up to a whopping 8,192Wh.

By combining its 900W solar input with its 400W input for an AC wall charger, the AC200MAX can reach a charging input of 1,300Wh – fully-replenishing in under two hours. Additionally, this power station comes with a 30A NEMA TT-30 rated RV outlet built in, plus a 12V/30A super DC port. So if you have an RV, van, or boat, the AC200MAX was specifically designed so you can plug your favorite vessel directly into it.

BLUETTI AC300 & B300: Power Anything Imaginable

The BLUETTI AC300 is truly unique because, unlike other solar generator products, it does not have a built-in battery. The result is unprecedented mobility and modularity. Each and every AC300 can accept up to 4 x B300 battery modules (3,072Wh each), tallying up to deliver a groundbreaking 12,288Wh of energy capacity.

Combined with the B300, the AC300 is as eco-friendly as it is massive. It can receive 2,400W of unrivaled solar charging input, utilizing an advanced MPPT controller to recharge a single B300 battery module in as quickly as 1.5 hours. Add an AC wall outlet simultaneously and witness a colossal total input rate of 5,400W.

If the specs above weren’t enough, you can add BLUETTI’s Fusion Box Pro to your setup and take it to a pinnacle of energy storage. Connect a second AC300 unit and four additional B300s (eight in total) to utilize 240V, 6,000W, and a mind-blowing 24,576Wh of power. BLUETTI dares you to try to run out of power with this setup.

This peak system requires a slew of BLUETTI products, but you can’t get there unless you start with the AC300 and B300 combo. What better time to take advantage of Prime Day pricing of ($3,698) $3,399? Especially since BLUETTI is before bumping the price back up to $3,499, so hurry!

Other can’t miss deals from BLUETTI during Prime Day

Perhaps the highlighted deals above didn’t tickle you enough to “add to cart.” Well, BLUETTI isn’t done yet. Its Prime Day sale has additional discounts on a bunch of other products to fit any budget. Be sure to check them out below.

Soon after Prime Day, BLUETTI will continue deals with its Grand Summer Sale through July 31.