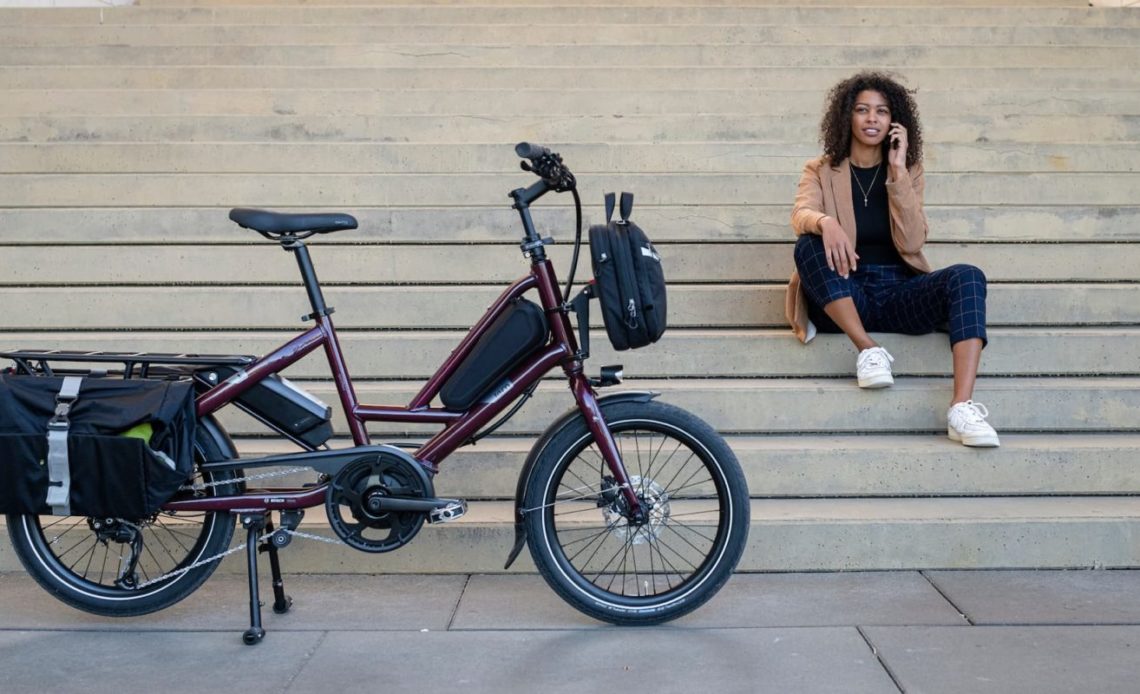 Eurobike is the premier bicycle trade show in Europe and one of the largest in the world. This year – for the first time – it’s taking place in Frankfurt, Germany. Once upon a time, electric bikes were a small corner of the show. But times have changed, and these days the main attractions are all the innovative e-bikes on display.

Electrek will be on the show floor right when the doors open to bring you the latest and greatest news and debuts from the bicycling world.

This year we’re excited to partner with Tern Bicycles, who is sponsoring our coverage. It’s perfect timing too, since chief among the many new debuts we’re expecting to see are some game changing e-bikes and products from Tern.

Check them out below along with the many other cool features we’re expecting to see tomorrow.

It’s been a busy few months for Tern, who has become the undisputed leader in right-sized electric cargo bikes and utility bikes.

Not only did Tern already have several highly acclaimed models of cargo e-bikes in their lineup, but the company has recently unveiled two new e-bikes that have made the brand even more accessible.

Just a few months ago, Tern announced a new model known as the Quick Haul, which takes many of Tern’s signature e-bike features and repackages them in a more affordable model for budget-conscious riders who are still looking for a high quality ride.

Tern more recently unveiled the NBD, which also adopts a similar design for a small-format cargo bike with big cargo capacity. But this time, the new frame with a low-step-through design is built to fit smaller riders and those with accessibility issues.

The two new e-bike models and all the other e-bikes in Tern’s lineup will be at Tern’s Eurobike booth for the public to check out. Those who want to get an even more intimate experience with the bikes should head over to Terns’ outdoor booth (F10.0/D04) in the cargo bike demo area to take a spin on Tern’s e-bikes and feel for themselves what a “right-sized” cargo e-bike feels like. Anyone wanting to try the NBD specifically can find it in the second test area at Hartje’s booth (F12.0/I15).

Of particular interest to businesses will be Tern’s participation in the Cargo Business Bike Panel on July 14 at 11:30 a.m. on the Pink Stage in Hall 8. Tern’s heavy-hauling cargo e-bikes are popular with many commercial users due to their rugged designs. They’re built to withstand daily commercial use, not just light consumer use, which should also be another good indication for consumers that these bikes are overbuilt to last for a generation.

We’ll be sure to get some saddle time on Tern’s bikes, and you can be looking for that in our summary video as well as likely a few dedicated testing videos too. To get an idea of what we’re in for, check out our Eurobike video below from last year’s event to see the wide variety of cool e-bikes that will be at the show.

Valeo will be on site to show off its Valeo Cyclee electric bike drive system.

The unique drive is an innovative setup that combines at the pedals a 48V electric motor, automatic gear box, and predictive software for shift timing.

The system has apparently been scooping up customers, as Valeo explained:

After unveiling this major innovation for the new mobility landscape in December 2020, 14 months later in February 2022, Valeo already had its first 14 customers. And on the eve of Eurobike 2022, Valeo announces it has now won the trust of 20 bicycle manufacturers, around 20 months after the technology was first unveiled.

ABS braking from Shimano and Blubrake

Anti-lock brakes aren’t just for cars and motorcycles anymore. Now electric bikes will be able to take advantage of the important safety innovation thanks to Shimano and Blubrake teaming up for a new product launch.

The goal is to reduce the chance of the front wheel locking up or the rear wheel lifting up, even during panic braking. While that might make it harder to pull off some sweet tricks, it’s a much safer way to brake for the millions of riders out there who rely on bikes for daily transportation.

The design is being offered by Shimano to manufacturers that can integrate the hardware into the frame of a cargo bike, keeping a sleek design without added bulk.

This is definitely one that we’re going to want to see in action in Frankfurt!

Super73 confirmed to Electrek that they’ll be in attendance with the bulk of their German team, and they’ll also have some of their US team on site, including CEO LeGrand Crewse.

The company will be showing off its wide line of motorcycle-inspired electric bikes that rely heavily on 70s’ and 80s’ minibike styling.

Last year we borrowed a couple Super73 electric bikes from the company’s Eurobike booth and had our own little Eurotrip across Germany with them. It was quite an adventure, to say the least!

Despite Super73 unveiling a concept electric motorcycle earlier this year, we’ve been told to not get our hopes up for seeing it in Frankfurt. However, it could make an appearance at EICMA 2022, the Milan Motorcycle Show, so we’ll keep our fingers crossed there.

Honbike recently unveiled its latest electric bike model known as the U4.

The Japanese e-bike company is known for its funky and stylish designs, and the U4 did not disappoint. The frame is ultra-minimalist, hiding away the battery and motor in a package that looks more like a pedal bike than an electric bike.

We don’t know too much yet about the new model, but we’re excited to learn more when we check it out in person.

We’ve had some fun playing around with a previous version of the Swytch kit, even taking it off-roading, but now the UK-based company says they’ll be hosting a preview of the world’s lightest and smallest e-bike conversion kit at Eurobike.

Considering how impressed we were with the last Swytch kit, we’re definitely going to want to check this new one out.

In the meantime, you can see the former kit in our testing video below.

We recently had the chance to tour Comodule’s factory in Tallinn, Estonia, to see how they build their IoT connectivity tech.

It turns out that many of the connected electric scooters and e-bikes available on the market today rely on Comodule’s technology to make their apps and features even more user friendly. That includes companies like Super73, Serial 1, Tuul, CAKE, and more.

The team is already set up at Eurobike and shared their booth image on Instagram below.

Comodule shares an origin story with Äike, the makers of premium electric scooters.

During our Tallinn visit, we had the chance to take a test ride on the newly-released Äike T electric scooter, and experience the awesome ride! The scooter is full of neat tech like USB-C charging, single side-supported wheels, a removable battery, and multiple display options.

The Äike team will have scooters available in the outdoor demo area, so you’ll definitely want to check those out.

During our tour of Ampler’s factory last month, we got to see firsthand just how much effort and care goes into building these premium electric bikes. The sleek bikes don’t even look electric, making them all the more impressive!

Check out our video tour below of the Ampler factory, then make sure to meet the team at Eurobike!

There are going to be hundreds of other interesting companies and products on display this year, and this article is by no means an exhaustive list. Consider this just a teaser of the companies that have reached out so far or shared with us some early info.

We’ll be checking out all of them and more over the next few days, so make sure you come back to Electrek to see our coverage. You’ll feel like you’re on the show floor with us!