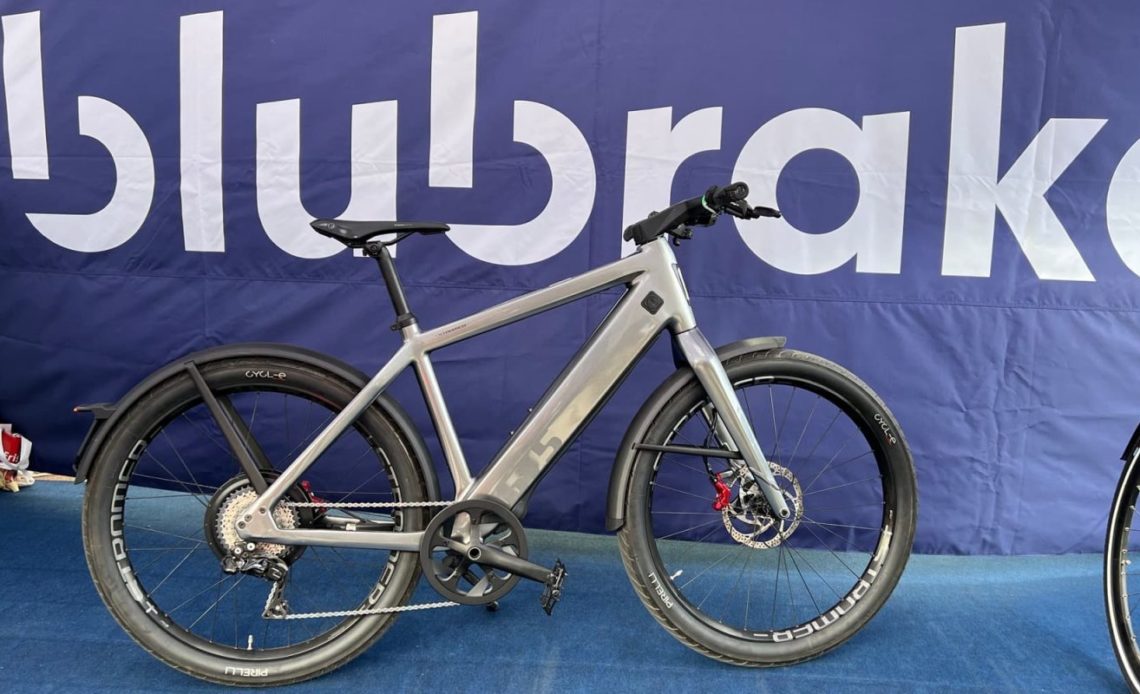 Anti-lock brakes might sound like old tech in cars (and motorcycles to a certain extent), but another two-wheeler has had to deal with brake lockup since its invention – the bicycle. But two different companies have just shown off competing anti-lock braking (ABS) systems designed for e-bikes to improve safety and performance.

Electric bikes make prime candidates for ABS brakes. Not only do they put on more miles and travel at higher speeds than pedal bicycles, but they carry an onboard battery that is perfect for running the electronics required by ABS brakes.

Rear wheel lockup usually isn’t a problem on a bicycle and, in fact, is often used on purpose for performing slides since it simply means the rear wheel drags along harmlessly. But front wheel lockup threatens bicycle stability, either by having the front wheel slip sideways (if in a turn) or by causing the rear wheel to lift up (if traveling straight). With high enough speed, this can cause a wipeout in a turn or an over-the-bars crash when riding straight. Neither are great options, and most cyclists try to keep both wheels firmly on the ground at all times.

Experienced riders can often modulate front braking power to mitigate wheel lockup when it begins, but this is a slowly acquired skill, often developed over the course of several skinned elbows and knees. And despite what many mountain bikers may think, computer-controlled ABS will always react faster than the meat computer under their helmets.

ABS for bikes promises to remove the danger of front wheel lockup, allowing riders to brake harder in performance scenarios, like racing and mountain biking, or to simply panic brake without the consequence of crashing due to front wheel lockup.

Blubrake has had a functional ABS setup for e-bikes for some time now but has just teamed up with bicycle component behemoth Shimano to offer the combined Blubrake/Shimano ABS for electric bikes.

The system uses an actuator mounted low on the fork that runs in-line with the hydraulic brake line for the front brake caliper.

When the system detects that the front wheel has slowed compared to the rear wheel, indicating an impending lockup, it quickly releases the brake pressure on the front disc rotor. The result is a slight pulsing sensation in the brake lever and the inability to actually lock up the front wheel.

We tested the Blubrake system a few days ago at the Eurobike 2022 trade show and were unable to lock up the front wheel, even with hard panic braking.

Bosch also unveiled an updated ABS as part of the company’s new product announcements at Eurobike.

The actuation of the system is similar to Blubrake’s, in that a proprietary black box sits in-line with the hydraulic brake line on the bike’s front fork, interrupting the brake line when it senses that the front wheel is locking up. It is currently only compatible with brakes from Magura, but Bosch plans to open the system to other brake manufacturers as well.

We tested the Bosch ABS setup on two different bikes – a full suspension mountain bike and a front-loading cargo bike. Both represent interesting real world scenarios where anti-lock brakes would be a huge improvement. For electric mountain bikes, riders can corner harder and brake quicker without having to modulate the front brake themselves to avoid lockup. The computerized wheel speed sensor will always react quicker than a human, meaning riders can improve their track times with ABS.

For a front loading cargo bike that is designed to carry children or heavy cargo, a front wheel lockup leading to a crash could be disastrous. But even with an empty front bucket, which is a perfect recipe for locking up a lightly loaded front wheel, I was unable to lock up the wheel when using the Bosch ABS.

We even hit up a patch of gravel to give the system a worst-case scenario, finding that the Bosch ABS kicked in perfectly to bring the bike to a quick and safe stop without locking up the front wheel.

Check out Electrek’s Seth Weintraub grabbing a couple fistfuls of brake in a patch of gravel below.