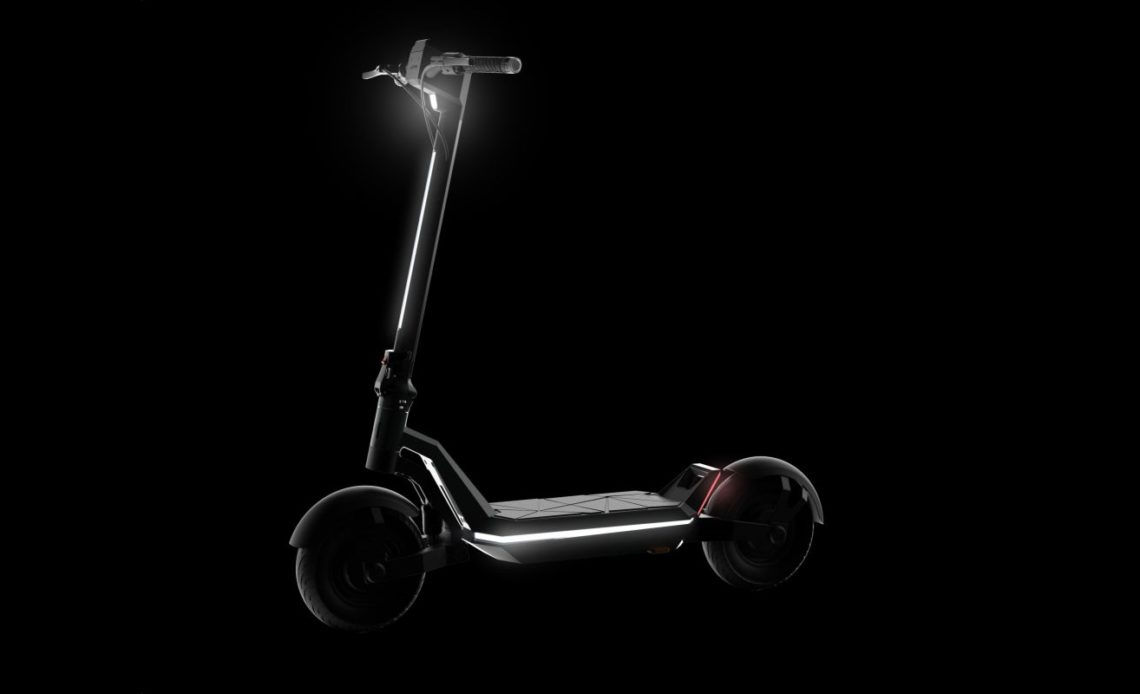 What do you get when you combine a Canadian electric scooter company known for high-quality designs and years of feedback from the electric scooter community? The world’s first electric Hyper Scooter, which is what the Apollo Pro claims it will be when it begins shipping early next year.

This isn’t Apollo Scooters’ first brush with innovation. The Montreal-based company has spent years developing its own electric scooter designs that rely heavily on the feedback it receives from its tens of thousands of electric scooter riders.

If you remember our test of Apollo’s last electric scooter debut, the Apollo City from a few months ago, then that will give you just a taste of what the company has shoehorned into its latest model.

As Apollo explained in a statement provided to Electrek:

The Apollo Pro is the first electric Hyper Scooter due to its high performance, IoT integrations, and robust personalization capabilities. Released only a couple of months after the launch of the City 2022, the Apollo Pro takes the concepts from the latter and brings them one step forward. Built with people-first design principles in mind, it integrates cutting-edge technology from vehicles, smart phones, and IoT to offer the most comfortable and a safe riding experience. This latest innovation features IoT (internet of things), smart BMS (battery management system), phone as display, amongst numerous other features that make it what is considered to be a one of a kind creation.

While most electric scooters on the market are largely a collection of off-the-shelf components (or often simply re-branded OEM scooters), the Apollo Pro has over 150 custom-made components developed by Apollo, including the unibody frame created from a single piece of aluminum that is capable of supporting 150 kg (330 lb). The frame includes dual suspension with front and rear swingarms for smoothing out those rough urban streets.

Critical parts like the proprietary M1 controller are said to help create that unique and customized user experience that spans from the scooter’s build quality to ride style. The scooter includes parts like giant (for a scooter) 12″ wheels with self-healing tires that eschew inner tubes for an automotive-style tubeless rim and tire setup.

Physical braking is accomplished via two drum brakes that are entirely sealed to offer zero maintenance concerns and the same braking performance in both wet and dry conditions.

But riders may find that they rarely use the physical brakes, as a separate throttle on the left side of the bars controls powerful regenerative braking that brings the scooter to a stop and recharges the battery at the same time.

But it takes more than a sophisticated build and custom parts to call a vehicle a “hyper” anything these days (unless you’re Walmart). Anything called a “Hyper Scooter” better be fast, and the Apollo Pro certainly delivers.

It uses a pair of 1,200-watt motors to give it 2.4 kW of all-wheel-drive power and a top speed of 70 km/h (43.5 mph). The scooter’s performance isn’t just a flash in the pan either, with an anticipated range of up to 100 km (62 miles) from that massive 30 Ah battery. That means you can either use the scooter at modest speeds for days (or perhaps even weeks) without recharging, or you can know that you’ll be able to ride hard at fast speeds all day on a single charge.

The battery will likely last riders well into the night, which is when the 360-degree lighting kicks in. Built-in LED lighting includes front and rear lights, turn signals, and lighting wrapping around the circumference of the deck. If you want to be heard in addition to being seen, the scooter even has speakers that can be used like a boom box.

Instead of trying to cram more and more into a small scooter display, the Apollo Pro makes use of the rider’s smartphone via the Apollo app to provide the most detailed display possible. Your phone’s screen is all but guaranteed to be a better display than anything a company can include on a scooter, and so the Apollo Pro has a built-in phone holder on the bar. It even includes wireless charging so your phone’s battery won’t drain while you use it for in-app navigation, remote locking, and other app-related features.

The app is also used for off-scooter notifications via the included Internet of Things (IoT) technology. For example, riders can activate the scooter’s alarm after they park. Then if someone attempts to steal the scooter, a notification will be sent to the rider’s phone.

The scooter’s alarm will also sound while it locks the scooter so it can’t be ridden off or resold as a functioning scooter.

Alarms and auto-locking may help reduce the risk of theft, but they will never completely eliminate it. That’s why Apollo is going full Apple and offering Apollo Care as an extended warranty that includes theft coverage in addition to repairs.

What does all this cost you? Well, it certainly isn’t cheap, with pricing expected to land at $3,599, though you can at least get your foot in the door for cheap with a fully-refundable $20 deposit to hold your reservation ahead of Q1 2023 shipments. Financing is also available for $90 per month.

While the price might make your eyes bulge, it’s not unheard of in the high-performance scooter industry.

It might surprise some readers to learn this, but there are die-hard scooter fans out there that treat a 40-50 mph electric scooter as essentially their car. In big cities, it isn’t strange to see a dude in a motorcycle jacket and helmet flying down the road on a high-performance scooter like this, and there’s a good chance he spent more than $3.6K too. The high-power models aren’t cheap, that’s for sure!

In this case, you’re paying for a ton of innovation that went into developing a brand new scooter from the ground up, not just a collection of parts from a catalog like we often see.

The Apollo Pro won’t be for everyone, but for a specific segment of the scooter market, I can see this is exactly what they’re looking for.

I’m looking forward to the chance to test one of these in person once they begin shipping. While we wait for that opportunity though, feel free to take a gander at my Apollo City review below to see what the company can do for a (slightly) lower spec 30-mph scooter at a (significantly) lower price.