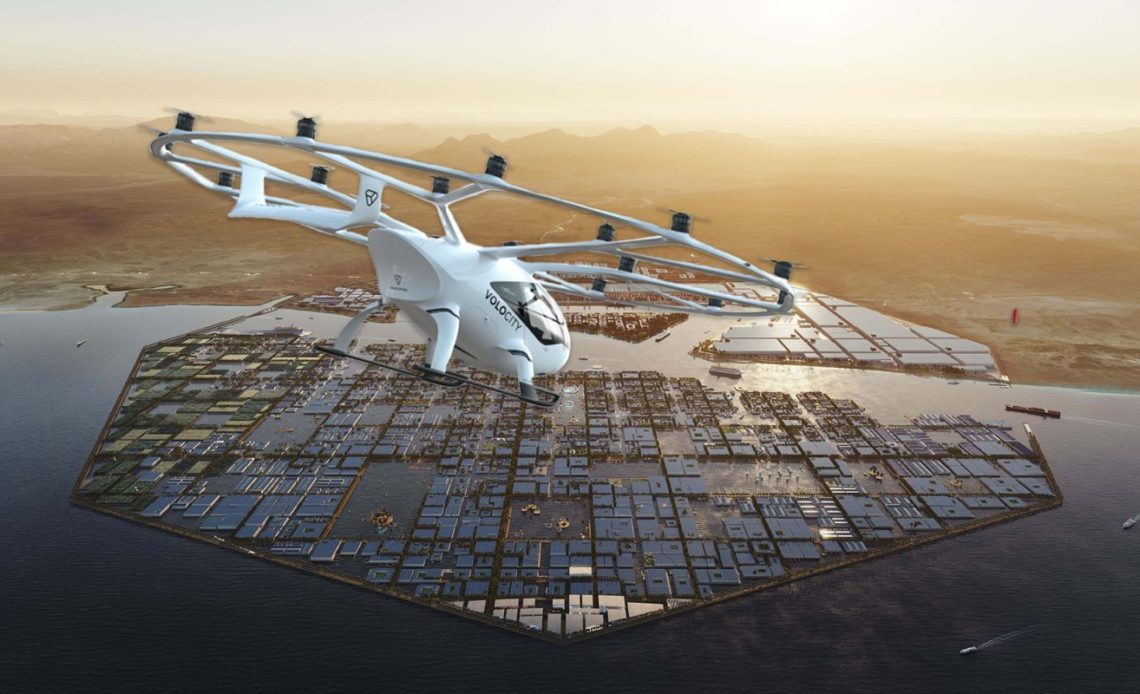 Urban Air Mobility (UAM) developer Volocopter announced a joint venture with the sustainable development of NEOM in Saudi Arabia to design, implement, and operate the world’s first bespoke public eVTOL mobility system. The initial order is for 15 Volocopter aircraft that will begin initial operation in the next two to three years.

If you’ve never heard of NEOM, it’s definitely an area worth noting as a city of the future. In fact, its name actually translates to “new future.” NEOM is a $500 billion sustainable regional development, rich with wind and solar energy resources to support its goal to be fully powered by renewable energy projects. Its website describes the project as follows:

NEOM is a region in northwest Saudi Arabia on the Red Sea being built from the ground up as a living laboratory — a place where entrepreneurship will chart the course for this New Future. A hub for innovation, entrepreneurs, business leaders and companies will come to NEOM to research, incubate and commercialize new technologies and enterprises in ground-breaking ways.

Saudi Arabia sees the future area of NEOM as not only a petri dish for future technologies but also a tourist destination, as well as a new home for anyone and everyone interested in building a new model for sustainable living, working, and prospering.

This includes forward-thinking energy solutions such as green power, as well as autonomous transports like drones and eVTOLs. That’s where Volocopter comes in.

Volocopter is a German urban air mobility (UAM) developer that functions as an aircraft manufacturer, airport, and aerial system developer all in one. We’ve covered the company a lot recently, as it continues to expand its eVTOL trials around the globe.

This includes researching the plausibility of UAM in the US, starting with Los Angeles, as well as public test flights coming to Japan in 2023. Not to be outdone, Volocopter is also working to operate air taxis in Paris during the 2024 Olympic Games. Let’s hope they learn from Toyota’s mistakes in 2020.

As one of the current leaders in UAM and eVTOLs, it’s no wonder Saudi Arabia is interested in testing Volocopter’s technology in NEOM.

The UAM developer announced its new joint venture with NEOM, Kingdom of Saudi Arabia, in a press release today, outlining the terms of the agreement and the plans for eVTOL implementation overseas.

NEOM has confirmed an initial order of 15 Volocopter aircraft consisting of 10 VoloCity passenger eVTOLs for public transit and five VoloDrone cargo drones for logistics. Both sides of the joint venture believe these vertical mobility services can succeed as an integral part of NEOM’s three-dimensional, zero-emissions public mobility system. NEOM CEO Nadhmi Al-Nasr spoke to the agreement:

In designing cities and urban infrastructure for the 21st century, mobility is at the center of the equation. Through this joint venture with Volocopter, we are demonstrating to the world that NEOM is the ideal region to implement urban air mobility rapidly and create a fully integrated vertical mobility ecosystem. NEOM is on a mission to become a global living lab for future mobility, and we are very excited to see what the future holds as we grow.

Volocopter and NEOM will begin work at the start of 2022, to scale up its operations and prepare for urban air mobility in the region, ahead of a full bespoke eVTOL mobility ecosystem. Both sides expect to begin initial flight operations in the next two or three years.

If there’s anywhere I could see eVTOL air taxis becoming an integrated public transit ecosystem, it’s Saudi Arabia. The more I researched NEOM, the more I was intrigued by the prospects of this new futuristic concept built on renewables, technology, and inclusion (we’ll see about that last part).

While the concept sounds like a dream come true on both paper and its sleek website, NEOM is not without its controversies, especially as it pertains to the project’s creator, Crown Prince Mohammed Bin Salman. Many question whether NEOM will actually come to fruition.

Regardless of how successful or not NEOM actually becomes, it appears Volocopter will be providing Saudi Arabia with its eVTOL technology. If NEOM becomes the new future of urban communities and industrial cities, Volocopter will already be established as the aerial transit provider.

If NEOM fails, well… at least Volocopter got another proving ground for its technology. With all the global UAM projects it currently has in play, Volocopter has decent odds of reaching scaled eVTOL transit somewhere, even if it’s not ultimately in Saudi Arabia.