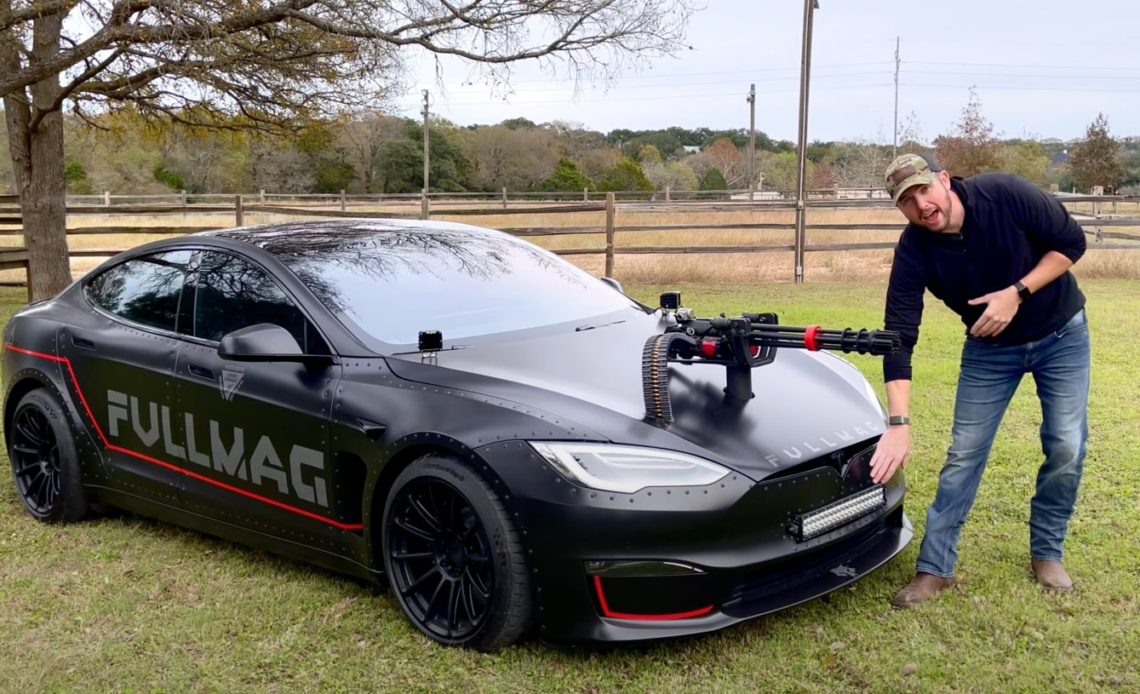 A Tesla Model S Plaid was modified to have a minigun in the frunk and night vision system. If you’re asking yourself, “Why?” I don’t really have an answer for you in this article.

Last week, we reported on YouTube channel Fullmag turning a Tesla Model X into a war machine with dual machine guns coming out of the falcon wings.

The vehicle was built for Black Rifle Coffee for PR and marketing purposes.

While the weapon system doesn’t have much to do with coffee, Black Rifle Coffee is veteran-owned, so it made a bit of sense.

Richard Ryan at Fullmag wasn’t done with the Model X. He also purchased a Model Plaid to do something else with guns.

On top of a full wrap and rivets all around the car, they installed a working M134 minigun coming out of the Model S Plaid’s frunk (front trunk):

They partnered with Unplugged Performance, a Tesla tuner and accessory maker, to install a cross-section in the frunk to support the gun and install a power system.

They had to be careful because there was a risk that the minigun would have enough kick to trigger the airbags.

In a follow-up video, Fullmag successfully fired blanks with the minigun on the Tesla Model S Plaid:

But that wasn’t the focus of the video. They also installed infrared lights on the vehicle in order to be able to drive it with night vision goggles.

As one of the riders in the Model S Plaid launching to 132 mph in the dark asked, is there any practical use to this? And the answer is no.

The Model S Plaid is already a roller-coaster stock out of the factory, but these guys managed to take it to a whole new level that we didn’t know existed just a minute ago.