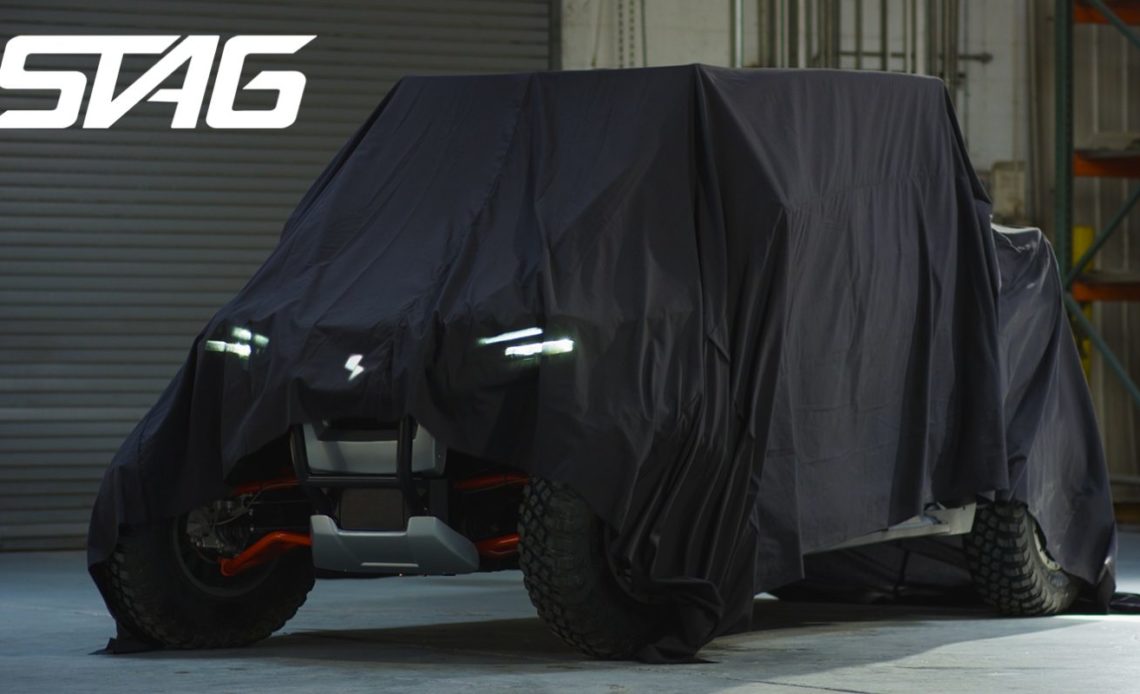 The nascent electric UTV industry is set to get another interesting offering later this week when Volcon (Nasdaq: VLCN) unveils its long-awaited Stag UTV.

According to the company, “Volcon, the first all-electric, off-road powersports company, will officially launch and open the door to consumer reservations via its website for its flagship, fully electric UTV, called the Stag, on Friday, July 1, 2022, at 1 PM EST (10 AM PST).”

The Stag has been nearly two years in the making after being announced at the company’s founding in late 2020.

Since the company’s debut nearly two years ago, most of its efforts have gone into the development and production of the Volcon Grunt.

The fat tire off-road electric motorcycle began making deliveries in late 2021, less than a year after the company’s founding.

With the Grunt’s development having moved at a blistering pace, the lofty goal of producing a four-wheeled electric UTV suddenly seemed within grasp for the young company, and the announcement of the Stag’s upcoming unveiling all but confirms it.

Volcon released the teaser image above, though we can’t see much more than past design renders have shown us.

Over the last year or so we’ve heard various specs floated from the company, including a potential power rating of 80 kW (107 hp) and a range of up to 150 miles (240 km).

Multiple battery capacities were said to be in the works though, with the largest of 69 kWh likely being the only one that could come close to achieving that maximum range spec.

Two other options of 23 kWh and 46 kWh were floated as possibilities that could help reduce the price of the Stag while still offering enough capacity for day rides. And with a likely ability to charge on a Level 2 home charger, a recharge of just a few hours could be a real possibility.

These were of course early specs based on a concept vehicle, and may change by the time the production vehicle is unveiled.

While Volcon has said the Stag was expected to be ready at some point in 2022, the company is working on an even larger vehicle known as the Volcon Beast that likely won’t roll out until the end of 2023 at the earliest.

The burlier 160 kW motor that was originally proposed would offer twice the peak power of the early Stag figures thanks to a pair of motors.

The power figures for both the Stag and Beast are around half the numbers originally touted by Volcon shortly after its founding in 2020, but likely represent more realistic figures that the company is more confident it can meet.

After a successful development and rollout of the Volcon Grunt electric motorcycle and a significant expansion of the company’s dealership network, the young powersports manufacturer is well positioned to deliver on its promises for the all-electric Stag UTV.

However, we won’t know the full specs until this Friday when we’ll learn whether or not Volcon was able to maintain its lofty design goals.

Once it reaches the market, the Stag will have very few all-electric UTVs to compete with. The only other major player is Polaris, which recently released its 110 hp RANGER XP Kinetic.

Other electric UTVs have been in the works, though it appears that Volcon is moving at a quicker pace than other electric powersports startups.