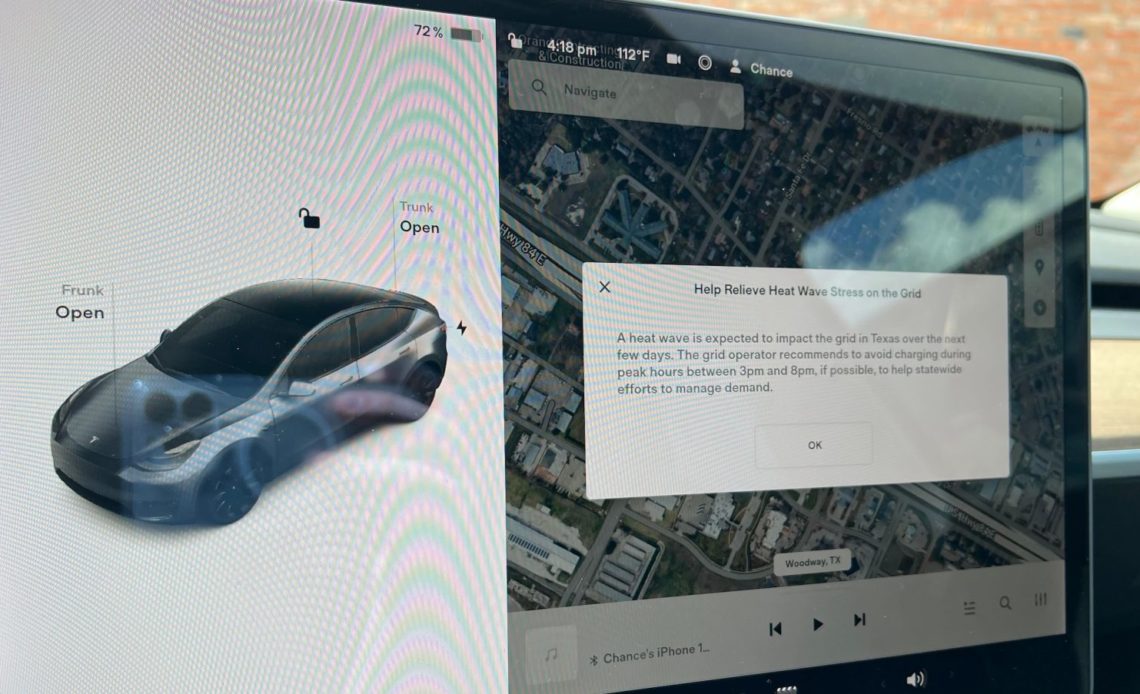 Tesla is trying to help Texas’s electric grid again amid another heat wave with its electric cars until it can with Powerwalls as it lobbies for some rule changes.

Texas has a notoriously fragile grid that is having issues supporting increasing peak electricity demand.

The issues have mostly come in the winter amid cold fronts, but the state’s electric grid has had issues this year with early heat waves.

The first one hit as soon as May, and it tripped six power plants in the state.

At the time, Tesla introduced a new way to try to help out with a new in-car alert to Tesla owners in the state encouraging them not to charge between 3 p.m. and 8 p.m. if they can avoid it:

A heat wave is expected to impact the grid in Texas over the next few days. The grid operator recommends to avoid charging during peak hours between 3pm and 8pm, if possible, to help statewide efforts to manage demand.

Texas is now being hit by another heat wave, and Tesla has brought back the alert yesterday, and it is expected to be active for the next few days since the temperature is well over 100F (38C).

But Tesla would prefer to help with its Powerwall owners instead of just its electric cars.

Its electric cars represent a partially controllable load – meaning that Tesla can influence whether they add a load on the grid or not.

Powerwalls can actually send electricity back into the grid when needed, like right now. That obviously would have an even greater impact.

As we reported last month, Tesla has launched a virtual power plant demonstration with Powerwall owners in Texas, and the goal is to demonstrate the value to ERCOT, Texas’s electric utility regulating body.

The company needs ERCOT to change some rules in order to compensate those homeowners to use the power in their home battery packs. Right now, they are not being compensated, and it obviously reduces the appeal of helping the grid after investing in your own home energy system.

Nonetheless, Tesla managed to convince 64 Powerwall owners in Texas to join the demo as of last month, and it has hundreds of Powerwalls that could help the Texas grid.