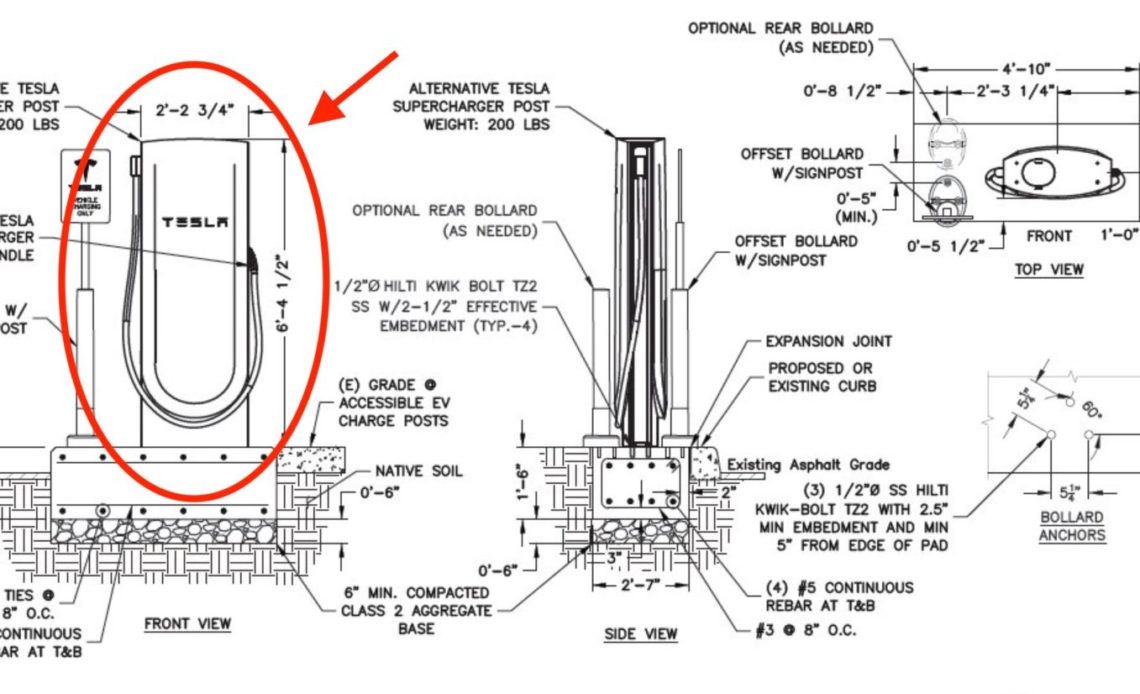 Tesla Supercharger V4’s design has been revealed as part of the construction plans of a new station being deployed in Danvers, Massachusetts. It’s another clean design that is reminiscent of previous chargers.

Tesla’s Supercharger technology has evolved greatly over the years, going from 90 kW of capacity to 250 kW. But when it comes to the design, it hasn’t evolved a lot.

Tesla’s first Supercharger was a bit more square and blocky-looking, but the automaker didn’t deploy many of those stations. The company quickly moved to a new design (on the right) that is similar to the first generation but more refined. This design is what most people associate with the Tesla Supercharger network today:

Tesla also launched what it calls a “Urban Supercharger” with a different design, but it is meant for garages and parking lots in cities and is limited to 72 KW:

It is not a new generation of the Supercharger design, but something that Tesla has been deploying along with the previously mentioned design.

We know that Tesla has been working on a new generation of the Supercharger technology. In a recent earnings call, Tesla mentioned that it is pushing toward upgrading its fat-charging technology to a peak charge rate of 300 to 350 kW.

Furthermore, the automaker has been talking about integrating the CCS connector to the Supercharger network in North America, like it did in Europe, in order to open its network to non-Tesla electric vehicles.

There have been rumors that the new Supercharger would come with a design refresh, and now it looks like Tesla has revealed it in a new Supercharger construction plan application in Danvers, Massachusetts (via John Harris Twitter):

In the application, Tesla shows both a Supercharger V3 post and this new one called “Alternative Tesla Supercharger Post.” The automaker appears to be covering its bases and submitting both designs to have the new one accepted if it is ready in time for this particular station in Danvers.

Here’s a side-by-side of the two designs in the application:

It shows that the new design doesn’t feature the same protected cable inside the post opening, and the cable appears to be significantly longer. The new post is also significantly higher than the previous design.

Overall, it looks like a significantly bigger version of Tesla’s Urban Supercharger, which is the automaker’s latest Supercharger post design.