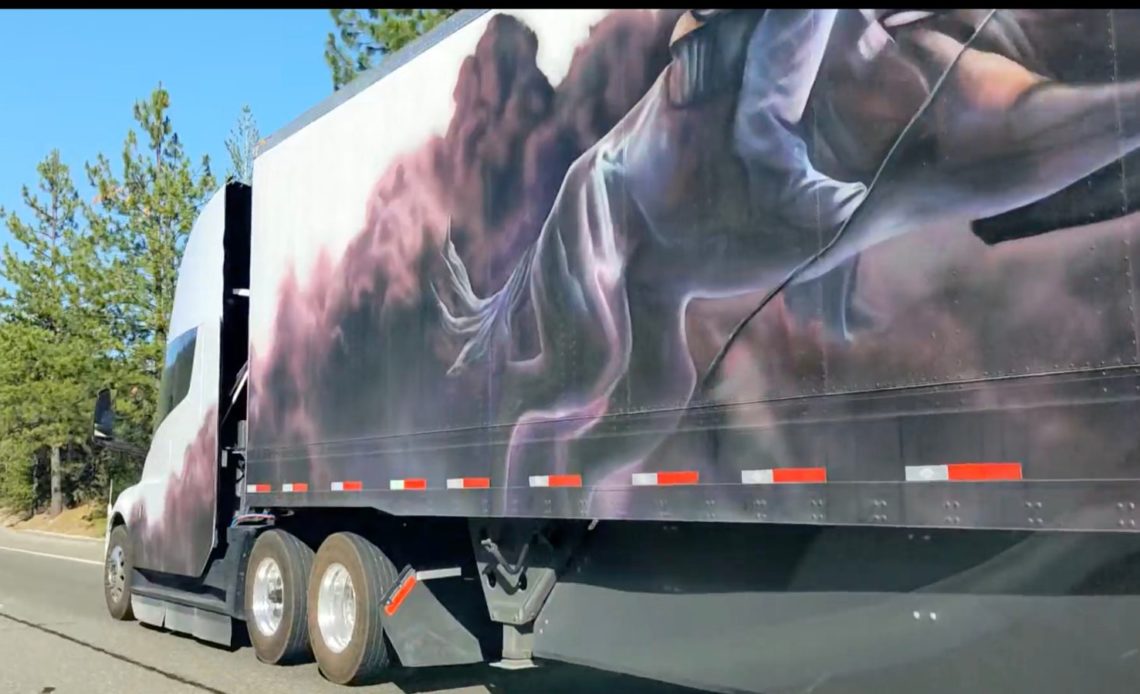 A Tesla Semi electric truck with some impressive artwork was spotted on the highway. Based on its location, it looks like Tesla is putting the electric truck to work in its own operations.

Tesla Semi might be the automaker’s most disappointing program to date.

When the original prototype was unveiled in 2017, it sent waves in the trucking industry for its potential to both decarbonize trucking and significantly reduce the cost of operations of trucks, on which the whole world relies for virtually everything.

But the vehicle program is so late at this point that a lot of the hype around it has died down. Tesla originally said that it was supposed to come in 2019, but it has been continuously delayed, and now it is expected to reach volume production and have customers deliveries until 2023. That’s a four-year delay.

But there are a few Tesla Semi electric trucks out there, and now one of them was spotted by a Redditor on the highway in California this week:

The electric tractor and trailer feature some beautiful artwork, which would indicate that it is the same unit that Tesla brought to its Cyber Rodeo earlier this year since it was being painted by an artist during the event.

The location of the electric truck westbound on the 80 near Colfax, California would suggest that Tesla is putting the truck to work moving cargo between its many locations in Northern California and Gigafactory Nevada outside of Reno.

Tesla always said that it would be its own first customer when it comes to the Tesla Semi. The automaker operates a fairly large fleet of trucks in its own operations on top of using trucking companies and integrating electric trucks in its fleet, and would obviously align with its mission while also reducing its cost of operations.

The 80 between California and Nevada is an extremely busy route for Tesla since the automaker sends hundreds of thousands of powertrains from Gigafactory Nevada to Fremont factory.

We don’t know exactly how many Tesla Semi electric trucks the company has in operation today.

We know that Tesla established low-volume production of the electric truck at a facility next to Gigafactory Nevada last year and released an image of a fleet of 4 Tesla Semi trucks shortly after.