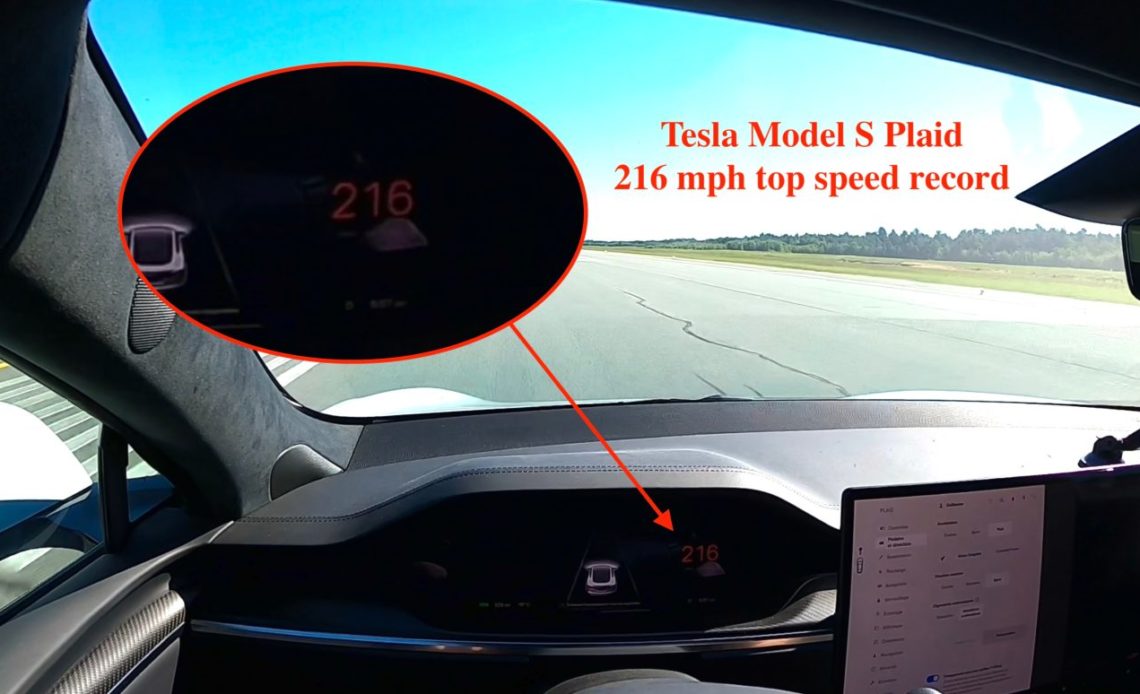 A Tesla Model S Plaid that has been hacked to remove software limitations has reached a top speed of over 200 mph (and then some) for the very first time, delivering on Tesla’s promise.

Earlier this year, Tesla released a new ‘Track Mode’ for the Model S Plaid that pushed the top speed to 175 mph (282 km/h).

As far as we know, this has been the fastest top speed a Tesla Model S Plaid or any Tesla vehicle has achieved to date. It’s not clear what is really preventing Tesla from enabling the promised 200 mph top speed. It could be the brakes, which Tesla is now offering to upgrade with a carbon ceramic kit for $20,000, or it could also be worries about the three motors or battery pack.

What is now clear is that Tesla wasn’t lying about the vehicle being capable of reaching 200 mph because I witnessed a Model S Plaid achieving just that this morning, but it wasn’t thanks to the automaker.

Ingenext, a Quebec-based company better known for selling modules that help unlock software-locked features in Tesla vehicles, has managed to get around the software limitations in the Model S Plaid to completely unlock the top speed.

This morning, Guillaume André, CEO of Ingenext, got behind the wheel of his hacked Model S Plaid and tried to break the top speed record at the Trois-Rivières airport in Québec, Canada.

The Ingenext team has tried to reach 200 mph with the vehicle before at other locations, but they literally ran out of space to safely reach that speed; the Trois-Rivières airport has a ~3 km (1.8-mile) long runway that was perfect for the test. They briefly shut down the runway for André to make attempt.

The only other modification is the Ingenext module, which allows them to bypass Tesla’s software restrictions.

André had about 1.2 miles (2 km) in his Tesla Model S Plaid to reach the top speed for starting to decelerate over about 6,000 feet, and it turned out that he needed almost that entire distance even with the higher performance brakes, but the attempt was successful.

Not only did they manage to achieve a top speed of 200 mph, delivering on Tesla’s promise for the Model S Plaid, but the electric vehicle achieved a top speed of 216 mph (348 km/h).

The sound was the craziest thing. It sounded like a jet was taking off right in front of us, but no, it was just a family sedan going 216 mph. That’s also the loudest I’ve ever heard Tesla’s cooling system trying to cool down the three motors and battery pack.