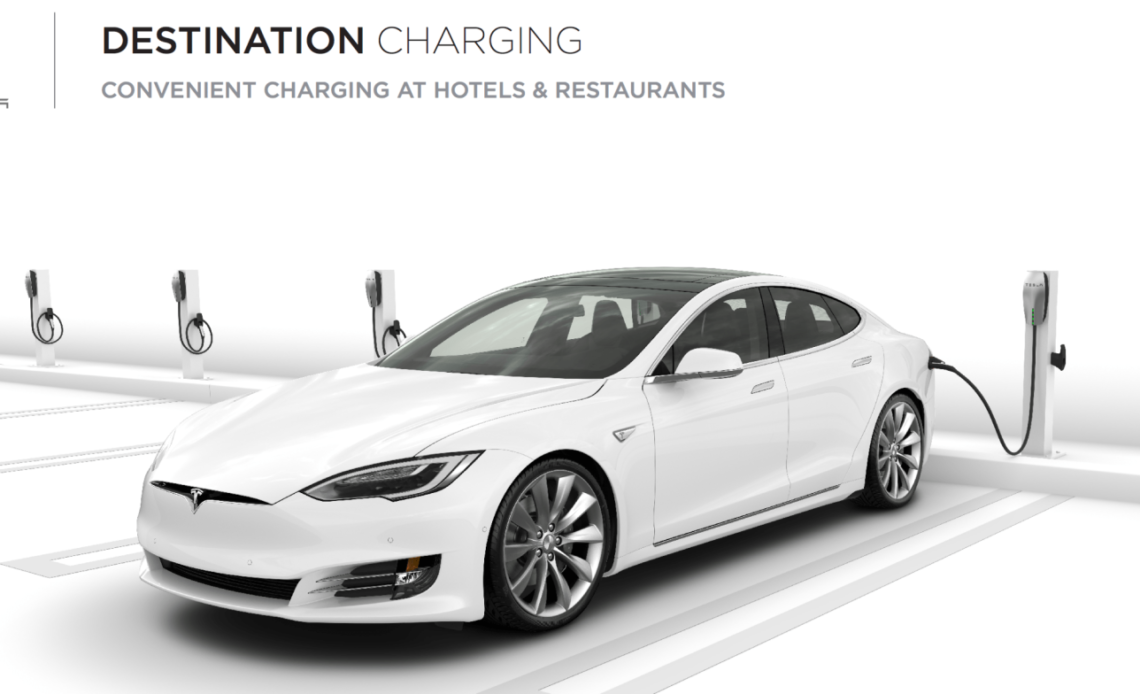 Tesla is enabling paid charging at Destination Chargers, which have generally been free up to this point, but there’s a catch: You have to have at least six Wall Connectors to be able to set pricing at your Destination Charger location.

The automaker operates two different charging networks. While Tesla’s Supercharger network is made of DC fast-charging stations for long-distance driving, the Destination Charging network consists of level 2 chargers, more specifically the Tesla Wall Connector, mostly installed at restaurants and hotels to charge once Tesla owners arrive at their destination, hence the name.

In 2020, Electrek reported that Tesla upgraded Destination Chargers with Gen 3 Wall Connectors, and the automaker told property owners that it would enable paid charging with this new generation charger.

For the most part, Tesla’s Destination Charging locations have been free with the only requirement at some places being that you be a customer of the business where it’s located – for example, if you use at a hotel’s Destination Charger, some locations require that you are staying at the hotel.

The cost of electricity from the chargers would be covered by the business.

But with this new Wi-Fi-connected Wall Connector, Tesla said it would enable businesses to charge for the use with the seamless experience Tesla’s charging networks are known for.

Tesla has now updated its Commercial Registration for Wall Connectors form to include the provision for paid charging, but the automaker confirmed that it will only let property managers with six or more Wall Connectors to activate the feature:

Tesla Commercial Services can be enabled on Gen3 Tesla Wall Connectors that are connected to either Wi-Fi or Cellular and have a signed Services Agreement with Tesla. A minimum of six units are required to be installed to be considered for this service.

This will eliminate a lot of locations, especially hotels, which account for a large part of the Destination Charging network, since most locations only have between two and four Tesla Wall Connectors.

But it might also encourage some locations to add more chargers since now they are going to be able to charge customers for the service and get back their electricity costs, which most EV owners won’t mind paying.

This new program might encourage some property managers to utilize some parking spaces better and turn them into small charging stations.

While fast-charging locations, like Superchargers, are more convenient for a quick charge, there are plenty of use cases for Wall Connectors, which can add about 44 miles of range per hour of charging.

If you have a parking lot in a downtown area that is easily walkable, you could add six or more Wall Connectors to your lot, and Tesla owners traveling to the city planning to spend a few hours there could park and charge there while exploring.

For some, it might be a better solution than a Supercharger, which you would have to come back to within an hour in order to move your car since it will be fully charged and you don’t want to occupy the space if you are not charging.

Now that those property managers can charge for the service and it’s fully automated in the Tesla app, it’s a more appealing solution since they can recoup the cost of deploying the chargers and the electricity while attracting Tesla owners to their businesses.