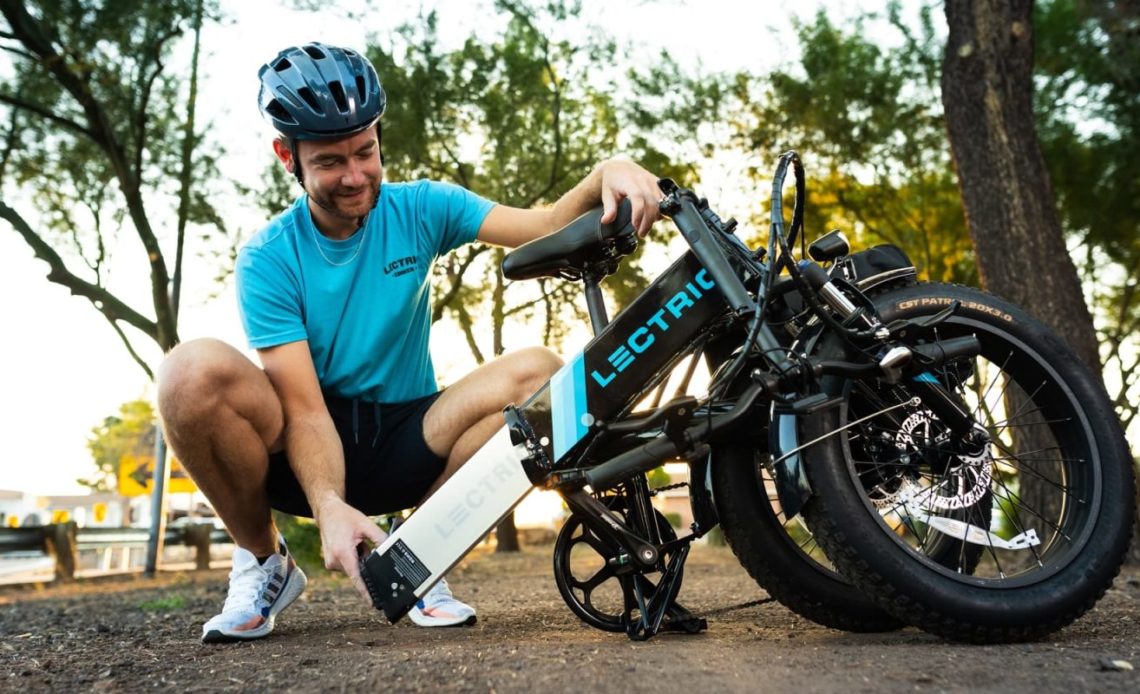 Faster and farther – those are two of the most common requests from many e-bike riders who rely on their bikes for daily trips. The e-bike is already quite fast at 28 mph (45 km/h), but now it is going farther than ever thanks to a big battery upgrade launched today by the manufacturer.

The originally came with a 460 Wh battery. But the new 48V and 14Ah upgrade battery holds a larger 672 Wh of capacity.

That marks a major improvement by adding around 45% more battery and thus 45% more range to the e-bike.

And perhaps the coolest feature is that it is also backwards compatible with the original Lectric XP 1.0 e-bike, a model that counts tens of thousands of units on US roads already.

The bigger battery fits in the same physical dimensions as the standard battery (making it compatible with both Lectric XP 1.0 and 2.0 e-bikes), as it simply packs in more capacity through higher-energy density.

Following a survey of Lectric riders, we recognized that there’s this very real appetite from not just prospective customers, but also existing customers for the ability to go on longer rides. We’re all about having people feel confident in their riding experience. I don’t want people to feel concerned that they might run out of battery, so we set out to eliminate that concern by offering this Long-Range battery.

The new long-range battery can be upgraded on an existing order at checkout , or can be purchased separately .

As Levi explained, that pricing is designed to beat major players in the rest of the industry.

The addition of the Long-Range battery is completely in the DNA of Lectric eBikes. When I say that, I mean we’re delivering a tremendous value to the customer. At the end of the day, you cannot get this much battery from anybody else at this price point.

A bit of fact-checking proves that Levi is mostly correct. The same size battery from major competitors like and will set riders back $550, or 10% more. However, sells 672 Wh batteries for between $459-$489 depending on the model. It’s still seems fair to say that Lectric’s new long-range battery is more affordable than most in the industry.

Lectric eBikes might still win out in the end though, as the company is offering existing customers a discount of 20% off the price of the new battery, or $100 off. That deal will only be around for a limited time though, and there’s no word yet on how long it will last. At $400 for the new battery during the limited time deal though, that likely puts it squarely in first place for pricing among major e-bike manufacturers.

And that’s par for the course, as the company is seen as a price leader among US-based e-bike companies.

Earlier this year, Lectric eBikes released the ultra-affordable . While the bike has a smaller 375 Wh battery, its 48V electrical system still offers good power yet in a smaller and lighter package.

We tested the bike in Phoenix earlier this year, and you can see our test ride video here.

The company followed that up with the launch of the . While higher priced, the Lectric XP Premium features a mid-drive motor, torque sensor, dual batteries, and hydraulic disc brakes, all of which push the price higher. The folding fat tire bike competes against other e-bikes that are well into the $2,500+ range, again demonstrating Lectric’s commitment to value pricing.

Check out our hands-on testing of that high-performance electric bike below.