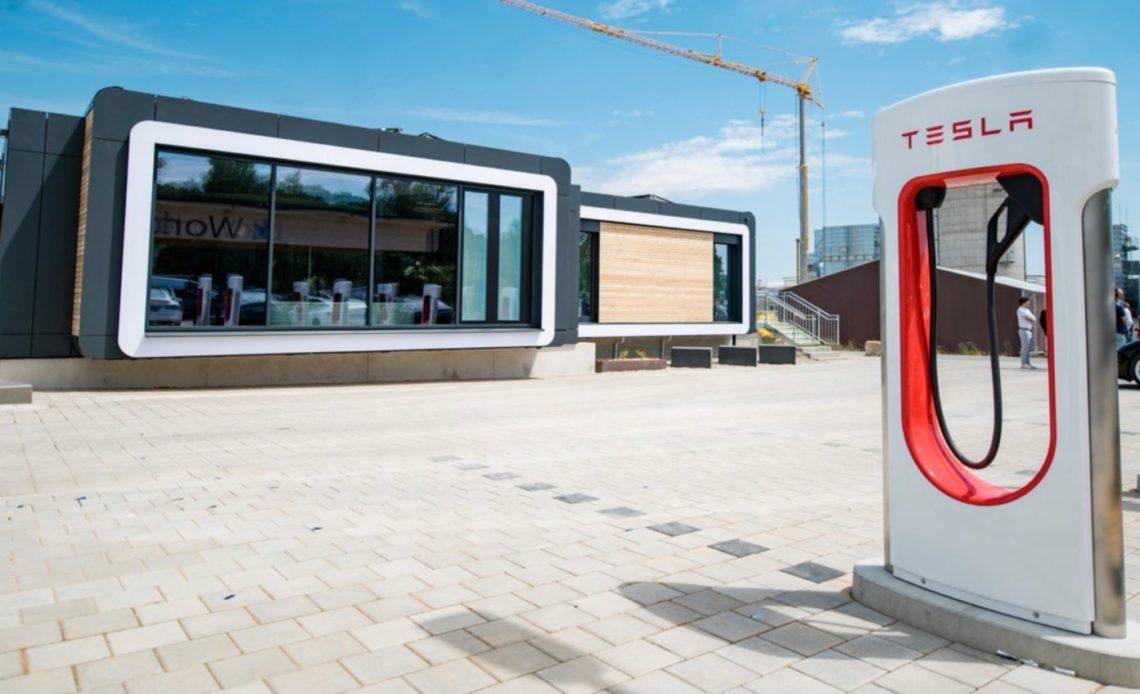 Tesla has deployed large cube lounges at a Supercharger station in Germany that is equipped with automated vending machines for coffee, food, and more.

The new partnership with bk World to deploy these lounges could reshape Tesla’s Supercharger networks in regions where it is more challenging to deploy charging stations near amenities.

Tesla has been trying to deploy its Supercharger stations at properties located around amenities that offer food, coffee, and restrooms, but that is not always easy.

At a few locations, Tesla has deployed its own lounges to offer those amenities.

Now the automaker is trying a new approach through a partnership with bk World that developed a new deployable cube lounge that includes a bunch of amenities – many of them automated:

“bk World of course offers bathroom facilities, while a comfortable lounge area invites drivers to linger. But the concept is far more extensive. For instance, it makes extremely efficient use of the small footprint. Various products are dispensed in a fully automated way. The food that drivers can purchase on site is healthy, fresh, and low in sugar. When selecting the product portfolio, the planners deliberately avoided working with large corporations and chose instead to focus on keeping things regional and sustainable. Together with entrepreneur and investor Marcell Jansen, work is even going on to develop an innovative and healthy food portfolio especially for bk World.”

Inside, you access different food, drinks, and even some electronics through a very high-tech automated vending machine:

Outside, there’s even a machine that can make fresh pizza for you in about four minutes:

Most importantly, the deployable air-conditioned cubes are equipped with full restrooms:

In the lounge area, there’s a Nintendo Switch for kids – big or small:

There are also seating areas with electrical outlets for people to work or charge their devices:

bk World says that the lounges are easily deployable and can be moved quickly:

bk World is made up of what are known as Qubes – modular, transportable room elements that can be combined in a number of ways to meet a wide variety of space requirements on site. When a charging facility grows, its bk World can grow with it. Qubes can be assembled, disassembled, and relocated in a very short time. This is particularly good news for property owners, but also for charging facility operators. If a lease expires, bk World offers the greatest possible flexibility. The smallest version, with a lounge area and bathroom Qube, takes up around 50 square metres – but there is no upper size limit to bk World. This reduces material waste and makes demolitions a thing of the past. And bk World’s inherent adaptability makes it easier to find suitable locations.

While this is the first station using this new technology, the company says that it has 300 locations planned across Europe:

The bk World in Endsee is now open and ready to welcome all visitors to the Tesla charging park. But this first location is just the beginning: in the next five years, bk World Holding GmbH plans to open 300 locations across Europe. bk World is coming soon to charging parks run by the largest charge spot operators and energy providers – to the benefit of customers, retailers, and the environment.

It’s unclear how many of those are in partnership with Tesla.

Here, Out of Specs visited the station and took a look inside the lounge. You can check the video here: