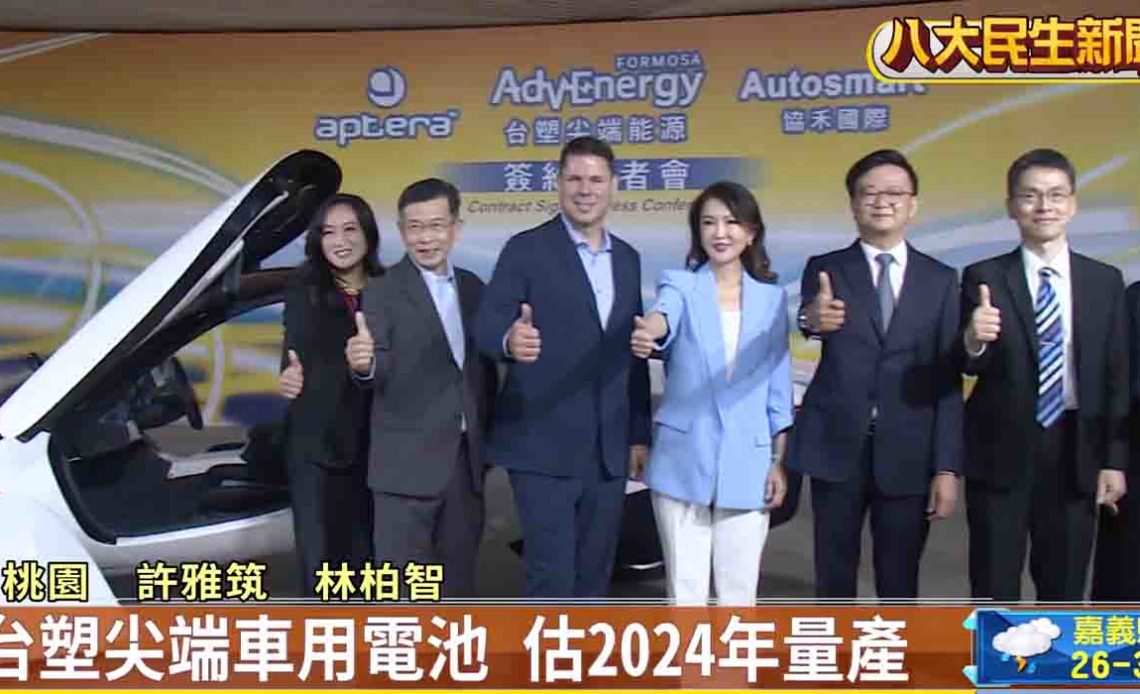 Nancy Pelosi isn’t the only American shaking things up in Taiwan this week. Aptera Cofounder and Co-CEO Chris Anthony is there with Taiwanese energy company Formosa AdvEnergy Technology Corp, on the heels of a new agreement to supply batteries to Aptera’s upcoming solar EVs. Additionally, a report out of local news in Taiwan says AdvEnergy also plans to produce the Aptera SEVs in Taiwan, but we’re skeptical.

Aptera first unveiled its flagship SEV in late 2020, showcasing three different alpha versions in black, white, or metallic silver exteriors. As recently as June, Aptera had over 22,000 reservations for its SEV as it nears initial production slated for later this year.

Following an additional $40 million in funding announced in early June, Aptera has been locking in several component suppliers vital to the SEV’s final design. This includes an agreement with Elaphe out of Slovenia for in-wheel powertrains as well as an agreement with EVE Energy Co., Ltd to utilize its 21700 NMC 811 cylindrical cells in the Aptera battery packs.

In addition to the aforementioned battery supply agreement with EVE in mainland China, Aptera has reportedly signed another agreement with Formosa AdvEnergy Technology Corp in Taiwan. Furthermore, the agreement could lead to more advanced batteries and maybe even SEV production… but that feels like a big maybe.

While Aptera has been quiet here in the states regarding news of its latest supply agreements, local media in Taiwan has been covering the story. Per the Taipei Times, Aptera Motors has signed a deal with Formosa AdvEnergy Technology Corp. – a battery development arm of Formosa Plastics Group in Taiwan.

Aptera Cofounder and Co-CEO Chris Anthony was in the ROC for the press conference, posing alongside an SEV with Formosa AdvEnergy Technology chair Sandy Wang. According to the report, the companies said they will also work together to develop a new generation of lithium iron phosphate (LFP) batteries.

The reports don’t say what current battery chemistry will be supplied to Aptera out of Taiwan, but based on its signed agreement with EVE Energy, Lithium NMC (Nickel-Manganese-Cobalt) cells would make sense.

What doesn’t make sense is another report out of Taiwan by Eight People’s Livelihood News, claiming that in addition to supplying batteries to Aptera, Formosa AdvEnergy stated it intends to also produce the SEVs in Taiwan – 20,000 units per year adding 4,000 jobs to the country.

When we visited Aptera’s facilities in San Diego last October, the company was transitioning into a new 80,000-square-foot facility slightly north in Carlsbad, California, where the upcoming SEVs are supposed to be assembled.

We have reached out to Aptera multiple times for clarification to see if the US is still the planned location for SEV production, but we have yet to hear back. For now, we know that Formosa AdvEnergy will be supplying batteries to Aptera SEVs, but the production claims seem doubtful. Stay tuned as we learn more.

You can still reserve an Aptera of your own for only $70 down.