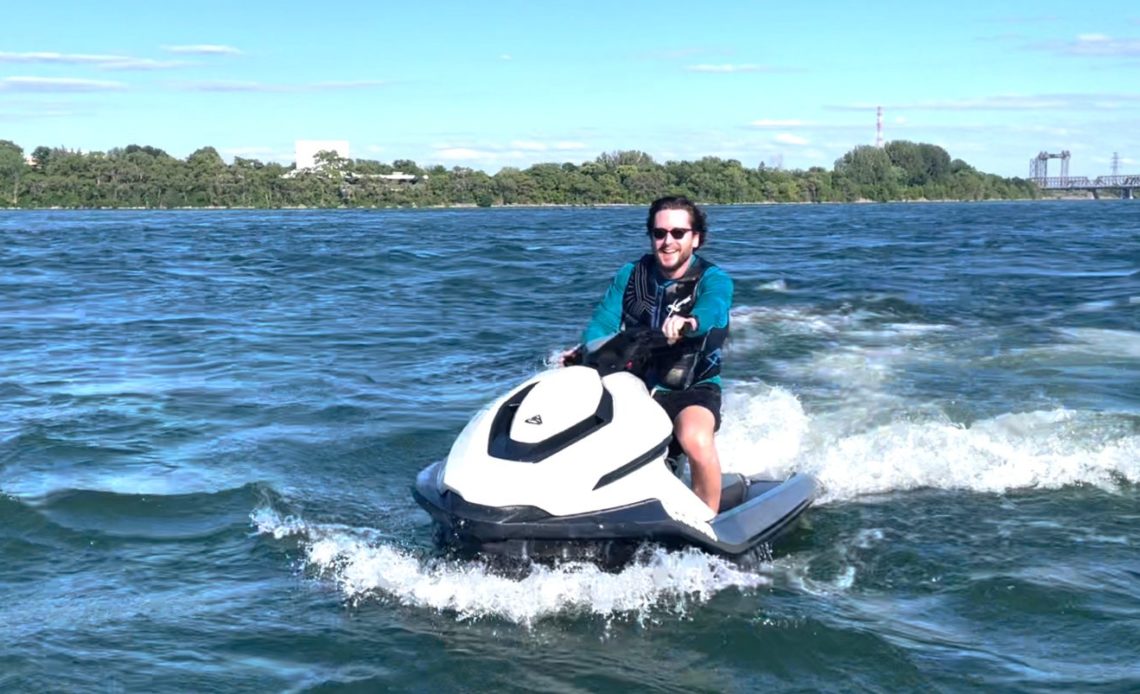 Taiga Motors has started deliveries of its Orca personal electric watercraft, basically an electric jet ski, and we got a chance to try it. It’s pure unadulterated fun on the water.

After being in the electric vehicle world for a decade, I’ve become extremely conscious of my energy usage. When I look at people flying around on jet skis on the water, I always thought that it looked fun, but I also didn’t see myself doing it because I think I’d ruin the fun for myself by thinking about all the fuel that I burned just for my own entertainment and an adrenaline boost.

But if I had an electric version of a jet ski, or personal watercraft since “Jet Ski” is actually a trademark, I can have fun without feeling bad about my energy use — especially if the electric watercraft is powered by clearn energy, like hydropower.

Snowmobiles and jet skis are about the same size, so Taiga leveraged the development of its small but robust electric powertrain capable of 120 kW output and equipped with a 24 kWh battery and fit it in a newly developed two-seater personal watercraft.

The vehicle was first unveiled in 2019, but the company is officially starting deliveries today.

This is a significant moment for the Taiga team because not only are we kicking off summer with Orca deliveries, but we are proudly marking the milestone of the first-ever mass-produced electric watercraft available to consumers. Years of engineering and testing of our revolutionary electric powertrain platform in snow and water has now come full circle, truly changing how people connect with the outdoors.

We stopped by their charging station in the old port of Montreal last week to test out their first few units, and we had a blast:

These crafts are pure fun machines. They have the same benefits as four-wheel electric vehicles when it comes to the incredible acceleration, which Taiga limits with a 40 kW max output in the “range mode” in order to conserve energy, but I was able to have plenty of fun even with the limitation.

I had to be convinced to switch the Orca to “Sports mode,” which increases the output to 70 kW, and I wasn’t disappointed.

Taiga also has a “Wild mode” for the wild ones who want to access the full power of the 120 kW motor. I wasn’t able to test that, but that’s okay considering I have limited experience with jet skis and sports mode was plenty for me.

As for how long the 24 kWh last, like any vehicle, that’s completely dependent on how you are using the vehicle. If you are going crazy on it, it might last you only an hour, but you can easily go several hours to a full afternoon if you don’t push it nonstop. And honestly, jet skiing is more tiring than I thought. Most people would probably be done within an hour or two.

Once the battery pack is depleted, it’s easy to charge it up. You can simply plug it into a regular 110-volt outlet for an overnight charge. It also takes 240-volt level 2 charging, which is often easily available at most marinas.

On top of it, Taiga is deploying its own network of charging stations including fast chargers since the Orca is equipped with a CCS DC fast-charging port:

That’s going to be particularly useful for commercial use of the electric watercraft like for example renting them.

The Taiga Orca starts at $17,490 USD, which is about what you would expect from a similarly powerful gas-powered jet ski, but the cost of ownership is going to be much lower thanks to electricity rates versus fuel costs.

Also, while we obviously don’t have historical data on electric jet skis since this is the first one being mass-produced, it is likely going to benefit from less maintenance and servicing that its fossil-fuel-powered counterparts, just like electric cars.

Taiga is now starting deliveries of the Founders series version of the Orca, which is a little more expensive at $24,000, but it comes with a carbon fiber chassis and more options for colors of the body and seat.

Right after our ride, I told Sam Bruneau, the CEO, that I believe these things will sell themselves. All you need is a test ride.

They should appeal to both fans of existing jet skis who want to do away with the noise and gas and to electric vehicle fans who want all the same advantages that their EVs have but on the water.

I was so impressed that I am even considering changing my Taiga electric snowmobile reservation to the Orca.

Let us know what you think of the Taiga Orca in the comments section below.