Shark-funded REGENT ‘seaglider’ concept will be made in the US 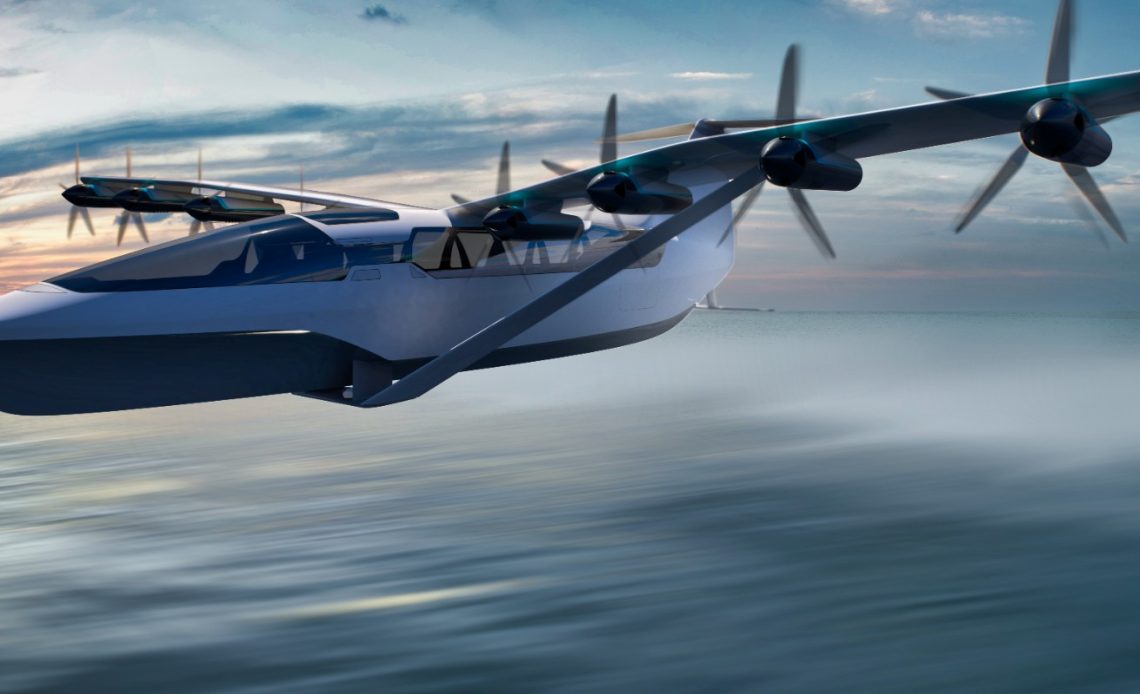 REGENT’s seaglider prototype will be built by the Moore Brothers Company, a Rhode Island-based composite manufacturing, research, and development firm with a proven track record of designing and delivering high-end composite body parts. And, if it’s not immediately clear what exactly they’ll be building here, don’t worry – it’s not you.

The seaglider is an interesting thing that’s not quite a conventional boat, not quite an electric hydrofoil, and not quite an airplane. Despite that, it will float on its boat-y hull from dock and, while in no wake zones, at speeds below 20 mph (about 17 knots). Above 20 mph, the seaglider will extend a retractable hydrofoil (similar to the one used by the Candela electric foils) that will lift the REGENT craft above the waves for a smoother, more efficient ride as the vehicle leaves crowded harbors and ventures into open water. Once in the open, the seaglider pilot cranks up the power to the electric props and the vehicle takes off – literally!

In full flight mode, the foil retracts back into the hull and the seaglider becomes a low-altitude, high-speed craft capable of cruising at 180 mph (just over 155 knots), all within a wingspan’s width of the ocean waves.

It’s an impressive concept, and will look something like this from an “I’m just chillin’ on my self-driving boat and this REGENT seaglider pilot has decided it’s our both our times to go” sort of vantage point.

A pinch of salt

It’s worth noting that Moore Brothers has never built anything like the REGENT seaglider in the past. That said, nobody else really has either, so a firm with years of prototyping and fabrication experience is probably a better choice than either an established boatbuilder or boutique plane shop, which might come at the project with a whole lot of “this is how we’ve always done it” and not quite enough “what if we did it this way,” you know?

REGENT certainly seems to be thinking along those lines, anyway. “REGENT’s seaglider technology demonstrator could not come together without the expertise of Moore Brothers,” said Billy Thalheimer, CEO of REGENT. “(Our) seagliders are not built in isolation: they are built on the backs of strong partnerships. As we continue to grow and move towards our 2025 commercial service goal, we look forward to partnering with even more incredible firms. We couldn’t image a better partner to kick off our technology demonstrator composite work than Moore Brothers… (it) is built to fully perform end-to-end capabilities of float, foil, and fly.”

If it works, the seaglider promises to greatly reduce travel time between coastal cities. “The efficiency of coastal transportation will be 100 times greater with REGENT. There is no other way to describe it,” investor Mark Cuban said in a 2021 statement about the project. “The idea of having to get between two coastal points is always stress inducing. REGENT changes all that and makes it fast and easy… Passengers will spend less time in transit and more time with their families.”

It’s not all about the tech

It’s important to realize here that, while the concept is awesome, it’s not just the technology that’s going to simplify the rich guys’ A-to-B travel here. Because of its ultra-low-altitude operation, it exists in a sort of legal gray area. Because the REGENT seaglider is not quite a boat, and not quite a plane, its makers and investors believe to have designed it to be ultimately regulated and certified by maritime authorities. That means you won’t need to file a flight plan or pilot’s log the same you would with a private or charter plane.

REGENT plans to run its initial, Moore Brothers-built prototype later this year, and ramp up to seaglider production by 2025. Its makers project that it will be able to service routes up to 180 miles with existing battery technology.

I’m not saying that a bunch of rich guys are investing millions into a high-speed aircraft project that seems designed specifically to skirt airport and FAA regulations about flight plans and pilot logs – but it’s been in the news, and I’d be shocked if I was the first person to think about the seaglider in those terms. I’m not that clever.

Regardless of why it’s being built, though, there is little doubt that the REGENT seagliders will be an absolute blast to fly in. I can’t wait to see one in action!