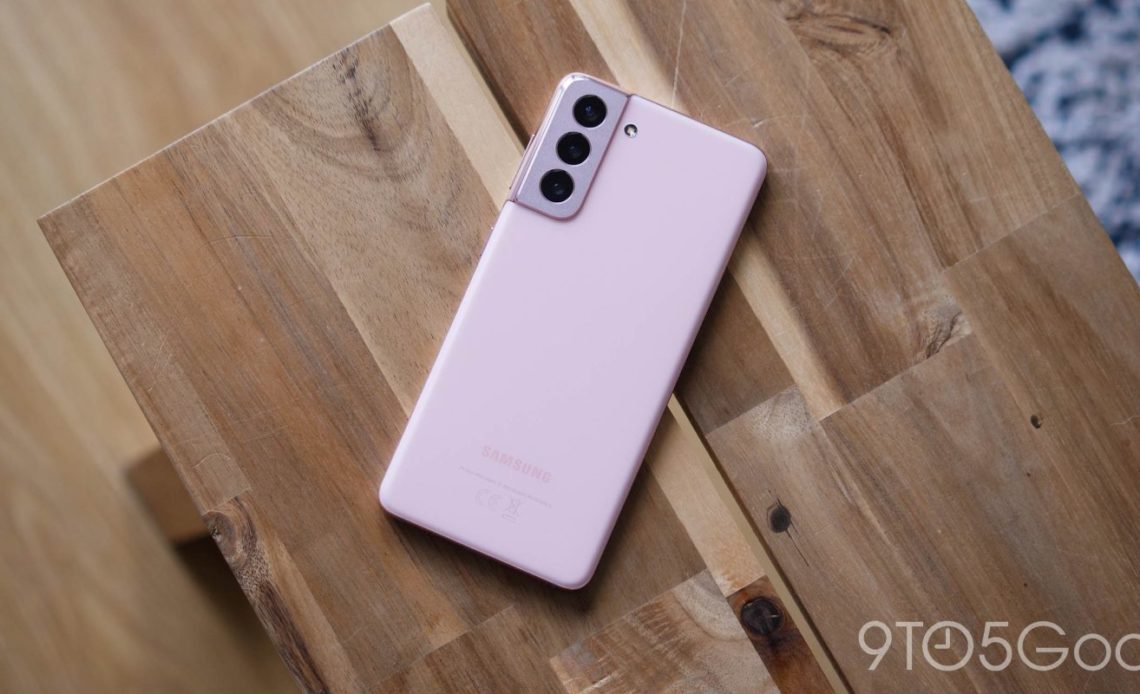 While Android 12 for Samsung devices look more likely with each passing week, the Korean firm is rolling on with its consistent monthly security patches. For November 2021, a select few Samsung Galaxy smartphones are already seeing the latest updates. Here’s the full, continuously updated list.

Sticking with the excellent track record of early security patch releases, the November 2021 update hit the flagship Galaxy S21 series on October 25. The update isn’t exactly “tiny” either at around 225MB in size.

Alongside Google’s suggested patches, this latest update addresses a number of issues specific to Galaxy handsets across the globe. Samsung provides fixes for 13 on-device vulnerabilities including one “high-risk”, one “critical” and two “moderate-risk” vulnerabilities found on Galaxy phones and tablets according to SamMobile.

Changelogs available to those already downloading the OTA in selected regions do note “new and extended functions” but it’s unclear if that is an issue using rudimentary Google Translate features:

As with just about any and all regular security update lists, Samsung has plenty of handsets to cover and protect. The list of devices eligible for updates includes over 100 Galaxy-branded smartphones with over 40 able to get monthly patches, 60 able to get quarterly updates, and over 40 more eligible for biannual updates.

That doesn’t factor in unscheduled updates for past hardware — something Samsung does offer from time to time. Because of this, it’s unclear what criteria Samsung uses to ensure that all devices are covered.

This article is being continuously updated as new updates are released. The latest additions are marked in bold.

As you would expect, the current top tier flagship Galaxy S Series was the very first to get the November 2021 update. It began hitting devices in Germany from October 26, which is very impressive. This update weighs in at around 225MB but is based upon Android 11. That does mean that anyone currently running the recent One UI 4.0 Beta will not be able to get their device updated as of late October.

Since the initial rollout, the stable Android 12 update with One UI 4.0 is now starting to arrive on Galaxy S21, S21+ and S21 Ultra handsets across the globe. This update also includes the November 2021 security patch. This means that if your region was not initially eligible or you had not yet seen the latest patch, you should be able to get updated from today.

The One UI 4.0 update includes a number of tweaks and tuning with some elements of the Material You and Dynamic Color overhaul seen on Google Pixel hardware. It does, however, make less of a difference to Samsung smartphones with modest changes and overall familiar aesthetic.

Despite being in the shadow of the S21 series, Samsung has now pushed the November 2021 security patch to the former flagship Galaxy S20 series. At this stage, it’s unclear just what the changelog introduces other than the latest patch, but the update began reaching S20, S20+ and S20 Ultra handsets in Germany on October 29.

For those in the US, it hasn’t taken long for the November patch to come to Qualcomm-powered Galaxy S20 devices. The rollout began on November 5 for those with carrier-locked devices on AT&T, Comcast, C-Spire, and Sprint’s networks. A wider carrier expansion commenced from November 8 with almost all major networks in the United States pushing the November patch to Galaxy S20 series handsets.

While not available in some regions, the 4G-only Exynos-powered Galaxy S20 FE 4G (SM-G780G) started to see the latest security update as of November 4 with a number of general bug fixes and enhancements in tow. This update expanded to more regions including Albania, Austria, Bulgaria, Caucasus countries, Germany, Indonesia, Ireland, Italy, Nordic countries, Portugal, Romania, Slovakia, Slovenia, Southeast Europe, Switzerland, the Baltic region, the Czech Republic, the Netherlands, the UK, Ukraine, and Uzbekistan from November 10.

Shortly afterwards, the 5G-capable Qualcomm Snapdragon 865 Galaxy S20 FE 5G started to see the November 2021 security patch from November 7. It has started to rollout to unlocked devices across the globe including the United States.

The first wave of Qualcomm-powered Galaxy S21 devices saw the patch heading out on November 2. This update began heading out to those with carrier-locked devices on AT&T, Bluegrass Cellular, C-Spire, Comcast, Sprint, T-Mobile, and Verizon’s networks.

As of November 1, the former flagship Galaxy S10 series — which includes the S10e, S10+ and S10 5G — started to see the very latest security patch in Samsung’s home market of South Korea. The patch does not detail any new features functions but does include the November 2021 security patch and should spread wider over the coming weeks.

Although more closely aligned with the Note 10 series, the Samsung Galaxy S10 Lite was the last of the former flagship smartphone lineup to receive the very latest November 2021 security update on November 16. Appearing first in Spain, the rollout is expected to increase over the coming days.

Although not technically part of the regular monthly update plan, the Galaxy S9 and S9+ is receiving one of their quarterly updates as of November 2. The November patch is already appearing on devices in vast portions of mainland Europe including Bosnia and Herzegovina, Germany, Italy, Kazakhstan, Luxembourg, Poland, Romania, Slovakia, the Baltic region, the Nordic region, and the UK:

Despite a lack of new hardware in 2021, the Galaxy Note series has a rabid fanbase that will be very happy to hear that the last device in the lineage is still receiving updates. We may eventually see a reboot of the Note series under the “Fold” banner but until then, the Note 20 series is all that remains. The good news is that the November 2021 security patch is now beginning to roll out to Exynos devices in the UK.

As of November 4, the US version of the Galaxy Note 20 and Note 20 Ultra is now getting the November 2021 security update on a number of carriers including AT&T, Comcast, Sprint, Verizon, plus many more.

The Galaxy Note 9 is set to lose support in the coming months but until then, the November 2021 security update is now rolling out as part of Samsung’s quarterly schedule. The patch is already hitting South Korean handsets as of November 5 but will seed out more widely very soon.

Almost a forgotten Note series device, the Galaxy Note 10 Lite is now getting updated with the very latest security patch. Given how little fanfare surrounded the original launch, we’re not sure just how many Note 10 Lite users are out there in the wild but the update has been spotted rolling out in France as of November 10.

Some people may still consider the Galaxy S series has the “flagship” devices in the Samsung lineup but the truth is that it’s the Z Fold series. To that end, the highest-end smartphone from Samsung was a little late at getting the November 2021 security update on November 4. The Galaxy Z Fold 3 is the first Fold series device to be updated this month in some central European markets. However, the Korean version was also updated but comes with a slightly different firmware version in Asian regions.

The Galaxy Z Fold 2 was the second such Z Fold series handset to get updated with the very latest November 2021 security patch beginning to rollout from November 4 within a number of regions including Austria, France, Germany, Greece, Hungary, Italy, Kazakhstan, Luxembourg, Poland, Portugal, Romania, Russia, Slovakia, Slovenia, Southeast Europe, Spain, Switzerland, the Czech Republic, the Baltic region, the Netherlands, the Nordic region, the UK, and Ukraine.

Rounding out the small but immensely important Galaxy Z Fold lineup is the original Galaxy Fold 5G, which has now been updated with the latest security patch as of November 10. This update dropped alongside the Z Flip 5G patch in vast swathes of Europe including Germany, France, Spain, Italy, the Netherlands and the UK:

In the Samsung smartphone family, the Z Flip series is the latest and greatest. As you’d expect, the November 2021 security update is now rolling out for eligible Galaxy Z Flip 3 handsets in a massive portion of the planet including the Middle East, North Africa, Central and East Asia and Eastern Europe.

The November 2021 security patch began rolling out for the Samsung Galaxy Flip 5G in vast portions of Europe from November 10 but it’s worth noting that this model is different from the 4G-only Galaxy Z Flip. It is highly likely that the update will come to the original Galaxy Flip over the coming days.

The Galaxy A Series is where buyers will get the best bang for their buck in the entire Samsung smartphone lineup — and updates are yet another area that these devices shine. While the Galaxy A32 is towards the bottom end of our recommendations, it is still a great package. Hot on the heels of the November 2021 security patch heading for Galaxy S21 series handsets, the A32 was updated on October 27.

The rollout started in Russian and Ukrainian markets but wider availability for the 5G variant was spotted rolling out from November 2 in the Philippines. As a distinct device, the Galaxy A32 5G comes with a different build number and a wider rollout is expected over the coming days in more eligible regions.

After an initial rollout, the November 2021 security patch is heading out to a wider number of Galaxy A series devices including the A51. Indian device owners are starting to see the update as of November 1 but it’s unclear if other regions are seeing the patch. Another affordable Samsung Galaxy A series device in the form of the A41 was updated with the latest patch on November 5 in Russia.

For those in the United States, the November 2021 security update is now rolling out for carrier-locked Galaxy A50 devices on selected networks – as of November 19. If you have a Sprint locked device in the US, you should be able to grab the OTA update over the coming days. For those in the rest of the world, the November patch is now beginning to seed to Galaxy A50 units. If you have the device in Europe, Latin America, South East Asia, and Australasia you should see the latest update very soon.

In certain regions, the Galaxy A52 and A52s 5G now seem to be receiving the latest patch in a concurrent rollout across Latin America. As of November 22, the impressive A52 is seeing the latest patch in Colombia, Guatemala, Mexico, Paraguay, Ukraine, and Vietnam. The improved Galaxy A52s is only currently seeing the November patch in Peru but will likely see a wider rollout soon.

In the world of Android tablets, Samsung stands at the very top as one of the few OEMs to continue pumping out large screen tech. Much like Samsung’s smartphone lines, the popular Galaxy Tab series is also regularly updated and a small number are in line to be updated this month.

As of November 22, a number of Samsung Galaxy Tab devices have been updated with the November 2021 security update including the Galaxy Tab A 10.5, Galaxy Tab Active 3, and the Galaxy Tab S7. The OTA has arrived in a few regions for the devices with a wider expansion likely over the coming days:

This article was originally published on October 26 and updated on November 25.