Repainter for Android hands-on: Make Material You yours [Video] 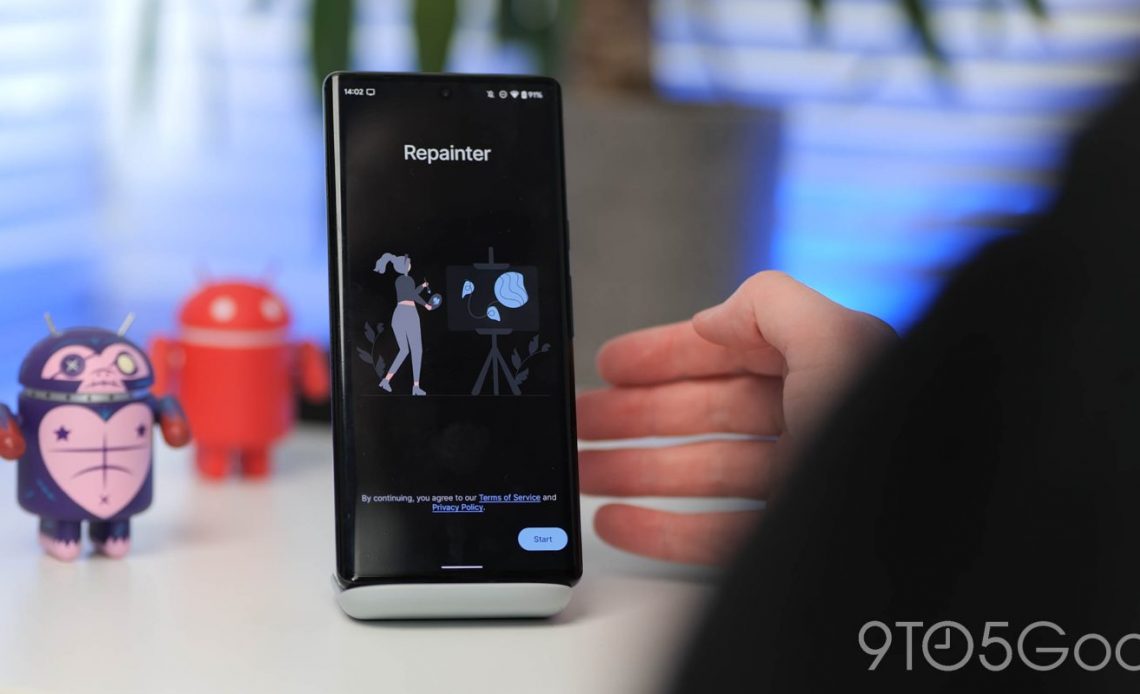 One of the core components of the massive Material You overhaul added with Android 12 is that of Dynamic Color and while it has proved popular, third-party app Repainter takes this customization a step further.

A big gripe with Material You is that while the dynamically changing color scheme and altered UI can look good, we lose out on quite a vast amount of unique customization. We’re still not sure why Google reworked the “Styles & wallpapers” section that allowed custom icon, font, and color scheme usage, but clearly, Google sees automated system tuning as the future of Android theming and customization.

Almost conversely to Google’s vision, Repainter from developer Danny Lin (kdrag0n) addresses the current limitations by giving you a little more wiggle room with Material You and the Dynamic Color portion. When system theming is so heavily dependent on your wallpaper color, and with so few options directly available out-of-the-box so to speak, your on-device theme can start to get stale over time. Lin’s app lets you go deeper than the admittedly basic options baked into Android 12. To find out why this might be of interest to you, we’ve spent an extended period with this intriguing third-party customization solution.

Sadly, it’s not as simple as just installing Repainter and then gaining the ability to choose colors and tune your Android 12 experience. While it’s not exactly difficult, there are a few hoops to jump through to get this excellent customization option working correctly on your phone. To note: Repainter also works with One UI 4.0, ZenUI, with partial support for OxygenOS and MIUI also included.

By taking advantage of another tool known as “Shizuku” and the ability to run ADB commands locally on your device without needing a PC connection, you can get enhanced color theming using Repainter. Now there are some caveats here as the January 2021 security patch has broken some elements of the app but with a rooted Android phone you can access some enhanced tweaking and tuning.

Using a combination of Shizuku and Wireless ADB, you’ll need to link to the app using a simple pairing code process. Something to note here is that you might encounter issues using the “Allow all” option when setting up Wireless ADB within Developer options the first time following this process. Avoid ticking this checkbox, as it can cause the link to fail. That said, if you encounter problems, rebooting can resolve lingering issues, but you will need to reconnect your device again to the Shizuku service using Wireless ADB each time your phone restarts — unless your device is rooted.

A rooted smartphone is not necessary though, as you’re still able to access some improved theming. On top of that, if you are running an older patch on yor device, you’ll also be able to access all features without root, which is arguably the biggest draw for many people that might be frustrated at the distinct lack of customization provided or offered via the stock launcher on phones running Android 12.

Provided you have theming active and have followed all prerequisite steps to get setup, Repainter allows you to tune and customize the wider dynamic theming settings within Android 12. Whereas the standard baked-in system solution automatically picks up to three colors directly from your wallpaper, meaning that in practice, you have little controls over which hues are picked.

This third-party app allows you to fully tune and tweak the colors across Android 12 on your phone. In the process, you’re afforded more than just three hues normally obtained from your preset wallpaper. Repainter even allows you to use a HEX code color picker for precise color selection and tuning. This opens up theme experimentation but still means you retain the ability to have a separate non-related wallpaper setup if you wish.

There is some transparency here too, as when using wallpaper-based colors you can see just what hues have been extracted from your on-device background. As we’ve already stated, this gives you more than just the three basic preset options that the Pixel Launcher would offer up on Pixel phones — something that is likely worth the admission price alone for those entrenched in device customization.

Places you’ll instantly notice changes and tweaks include the notification shade, the lock screen clock, app accenting, and widget color schemes – that’s what you’ll get if your phone is running the January 2021 update. Laid out in this format, it sounds quite limiting but this simply expands upon one portion of the in-built Android 12 system theming options.

Being able to set a custom secondary theme color also means that you can tailor system accenting to portions you wouldn’t otherwise be able to adjust or change. We wouldn’t recommend adjusting this settings too drastically as things can start to look a bit weird. Warning aside, if you want to really tune here, then it’s still a cool option to have.

Should you be running an older update or your phone is rooted, it’s here where we feel that Repainter becomes a really powerful theming option worth taking a closer look at. Either scenario allows you to get truly granular with the ability to adjust just how colorful the Dynamic Color effect will be on your phone.

You can even tint the background of screens, settings, and apps to your hearts content. Being able to adjust the brightness and color density means that you can dial up your theme quite dramatically – or, you can just remove the background tint entirely for a cleaner aesthetic.

One major differentiation that might pique the interest of Pixel owners, in particular, is the abiltiy to use or set a pure black background when using the system dark mode. For starters, this is a great improvement over the dark gray color used within the base Android 12 build. It also has some potential battery benefits for devices with AMOLED screens as the pure black color reduces pixel illumination across your device and, therefore, could help reduce power consumption.

It also helps that the black-to-gray switch in Android 12 has been one of the most derided design decisions and here is a solution that doesn’t break your device, nor does it need a custom ROM to achieve. That said, many people will be wary of rooting their smartphone just for a better dark theme, and it’s not something we’d actively suggest to most people.

A huge component is the changing nature of Repainter’s “Dynamic” color behaviour. Unlike the fairly static color-changing seen in the Material You implementation as it is, Repainter is even able to adjust to live wallpapers. This can pose problems, but a toggle ensures that battery usage isn’t too high and that your apps don’t constantly crash by limiting real-time alterations.

Tweaking the “Color targets” option allows for the usage of colors that Android 12 wouldn’t normally provide – Repainter is able to dial up the effect of Material You. Google’s implementation is quite muted and this “Boosted” profile helps expand Repainters effect and makes it more prominent across all facets of Android 12 — something that really helps your themes pop more so than the sometimes muted pastel hues of the stock implementation.

It’s easy to think of Repainter as an “enhanced” version of Material You theming. While the standard implementation is striking and it helps truly differentiate Google’s Pixel line from the rest of the Android space, it’s a little lacking in options right of the gate. At $4.99, this app is not what we’d consider cheap — I personally baulked at the asking price but bit the bullet anyway as it did capture my attention.

For Pixel owners, rooted or otherwise, it’s a no brainer but the fact that One UI 4.0 is supported means that Samsung fans might want to take a look here too. Throw a third-party launcher such as Lawnchair onto your device alongside Repainter and your customization options grow exponentationally. While we wouldn’t recommend that most people go out and root their devices, if you want some add customization — something that Google has seemingly reduced within Android in recent years — Repainter is a lovely extra tool to make Material You truly yours.

You can download Repainter from the Google Play Store priced at $4.99. The app is currently in “Early Access” with more compatbility for further Android builds expected over the coming months.