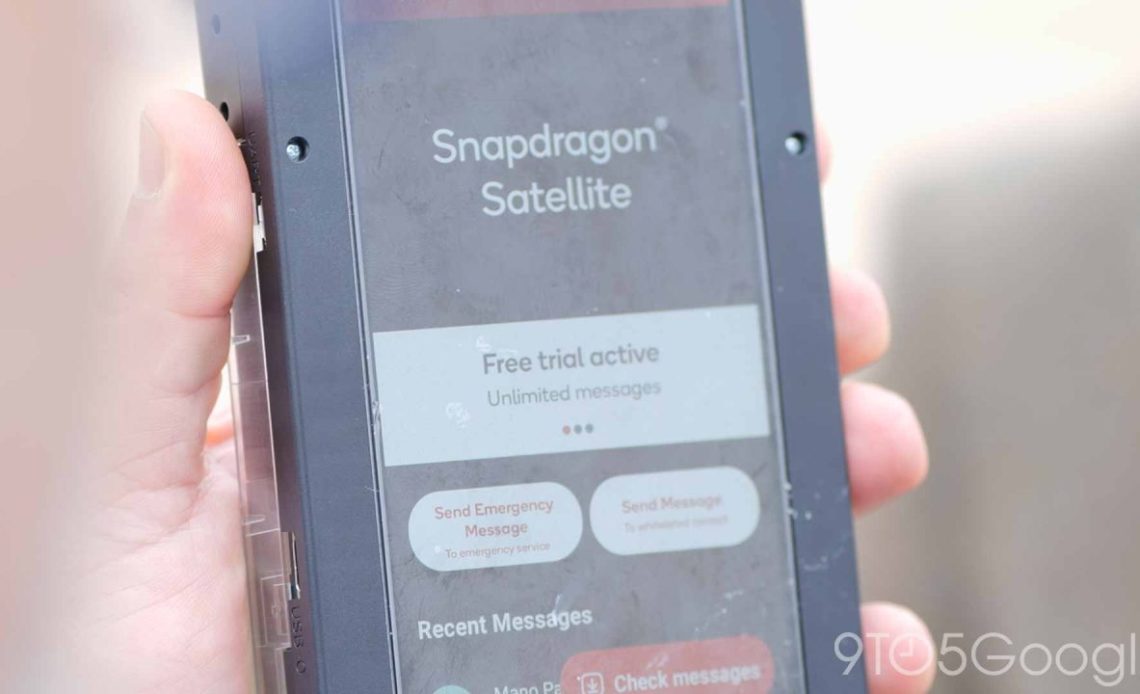 Qualcomm has partnered with communications firm Iridium and Garmin to introduce Snapdragon Satellite, an upcoming service that leverages GPS and satellite communications to enable two-way SMS texting when in rural areas or regions without regular cell service coverage.

If this seems familiar, this is similar to the feature “Emergency SOS” feature that was announced alongside the iPhone 14 and lets the iOS device send emergnecy messages via satellite connections.

The newly announced “Snapdragon Satellite” functionality will be available to select devices powered by the Snapdragon 8 Gen 2 chipset later this year thanks to an enhanced Snapdragon X70 modem. This service enables connection to the Iridium satellite system but requires OEMs and service providers to activate the functionality

Qualcomm demoed the functionality at CES 2023 – which was attended by 9to5Google – showing how Snapdragon Satellite allows you to send SMS messages to your contacts as well as alert emergency services if you were to encounter problems in remote locations.

This early showcase may not represent the final product, as OEMs will need to offer their own implementation or skin of the feature when it is fully available. It is also worth noting that this test was not carried out in a true remote location as 5G cell service was available in the outer reaches of Las Vegas.

To send SMS using this service, you’ll need clear sky and time to align your phone to point toward a satellite. Once the connection is established, you can send SMS messages. Demo devices were able to send SMS messages to a short preset list of contacts, this will be limited as Qualcomm wants to prevent spam from clogging network speed and access.

Because this system is limited to class SMS, you can only send 160 character messages back and forth using the Snapdragon Satellite function. Unlike Apple’s implementation, you’re able to type out your own messages and reach contacts in your address book. On iPhone 14, you are limited to canned responses that are sent on to emergency services.

Sadly, even if your next smartphone is powered by the Snapdragon 8 Gen 2 processor, unless it is released in the second half of 2023, you won’t be able to utilize the feature. That’s because the first wave of Snapdragon 8 Gen 2 chips will lack the necessary hardware for Snapdragon Satellite connectivity.

Qualcomm did not specify or provide details on how much this will cost to use when available later this year. It would not be a great shock if Snapdragon Satellite messaging will cost more than regular SMS. The chipmaker did confirm that “multiple” phone makers will add the feature in the second half of 2023.