Pixel 6 Pro vs OnePlus 10 Pro: Which is the better ‘Pro’ Android phone? [Video] 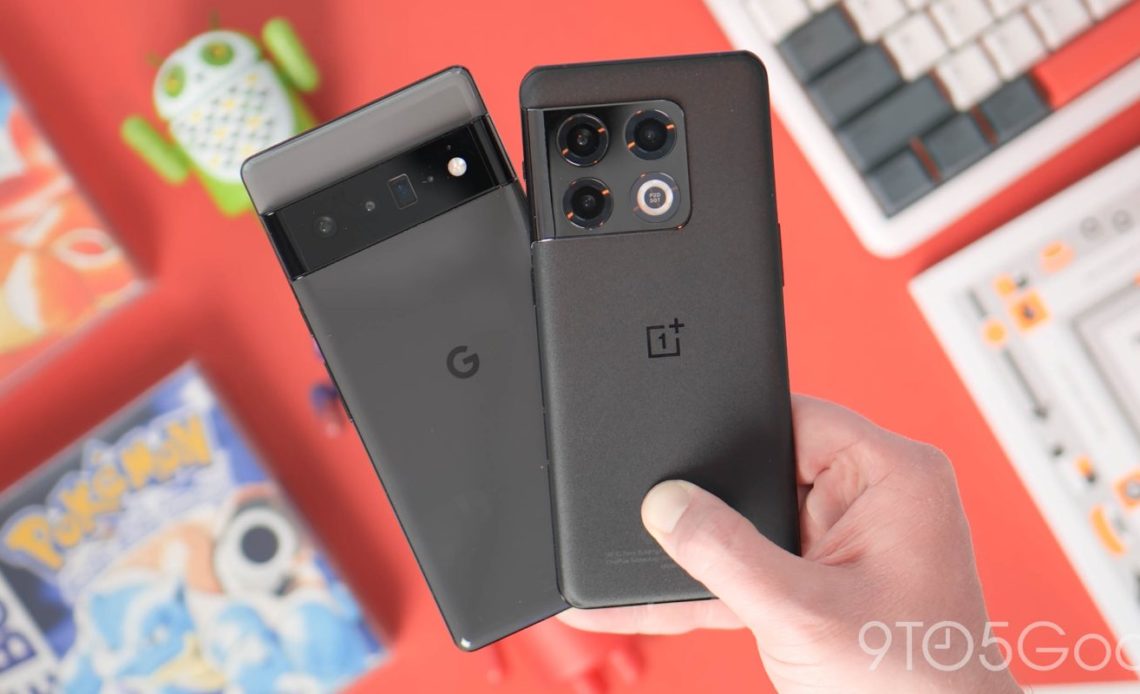 Given that many OnePlus fans are now looking for a new home courtesy of many OxygenOS changes, you may be looking at the OnePlus 10 Pro and Pixel 6 Pro wondering which is the right option to pick.

With both devices coming in at $899 and plenty of core differences, there’s a lot to compare when mulling over which flagship smartphone you are looking at picking up. Do you prefer hardware grunt over software nuance? Let’s compare the Pixel 6 Pro and OnePlus 10 Pro to help you make that all-important purchase decision just a little easier.

At least from a raw specifications perspective, things are heavily in favor of the OnePlus 10 Pro over Google’s late-2021 flagship. OnePlus’ newly released hardware includes the best Qualcomm processor which offers far greater performance levels than the custom Google Tensor chip found in the Pixel 6 Pro. While it doesn’t quite hit the heights of the best flagship Android smartphone chipset, it provides benefits in other areas such as AI processing, on-device translation, and more. It’s still a very high performer.

Of course, raw benchmarks only tell one side of the story, as elsewhere the two devices stack up incredibly closely. The Pixel 6 Pro even comes with a greater base RAM allocation as standard at 12GB. The OnePlus 10 Pro is limited in certain regions to 8GB, which although paired with a technically faster processor means that long term multi-tasking certainly favors the Pixel.

UFS 3.1 storage ensures that every interaction is fluid and snappy, but when loading apps side-by-side, things are almost indistinguishable. Google’s Android optimizations will certainly improve over time, which is a major selling point, but certain applications – like games – run at higher frames and are marginally smoother on the OnePlus 10 Pro.

The Pixel 6 Pro and OnePlus 10 Pro both come with curved QHD+ LTPO displays but with some notable differences. You’ll get a slightly higher PPI density on the newer device, plus a marginally shifted 20:9 aspect ratio vs. 19.5:9 on the Pixel 6 Pro. As for the display technology, effectively, LTPO screens can switch framerate depending upon the on-screen content all the way down the 1Hz. This is a basic summation as it will depend on the software tuning as to how often this occurs and how much of a battery benefit it offers.

Both devices come with in-display optical fingerprint scanners, but there is certainly more than an edge to the OnePlus 10 Pro here. Unlocking speed has increased on the Pixel but it is a step or so behind OnePlus’ latest flagship.

In the hand, the designs feel very distinct. The matte finish of the OnePlus 10 Pro and dense construction are very assuring. Sadly, the color options are limited to just two for the OnePlus, whereas the glossy finishes of the Pixel 6 Pro can be had in three distinct varieties.

Despite both shipping with Android 12, the Pixel 6 Pro already has a newer software version available that likely won’t come to the OnePlus 10 Pro for some time. Material You and Dynamic Color play a pivotal part in Android 12 – which is pre-installed out of the box on both devices.

However, the changes here are less noticeable on the OnePlus 10 Pro, which is now simply running OxygenOS as a skin atop ColorOS. In years prior, the Pixel series and OnePlus flagship phones ran very similar software. In 2022, the two are further apart than ever before.

On Pixel 6 Pro, almost every UI portion and all default apps adhere to the core color tones and hues extracted from your wallpaper choice. This even includes Google app widgets and the result is a truly unique experience. If you hate ColorOS, then we suggest avoiding OnePlus devices as OxygenOS is now merely branding for Oppo’s software skin.

Android 12L or 12.1 on Pixel 6 Pro includes a number of exclusive features tied to the hardware including on-device Live Translation, Magic Eraser, Assistant Voice typing, and much more. Not to be left behind, the OnePlus 10 Pro includes a suite of enhancements including improved gaming modes, Zen Mode 2.0, better haptic controls, plus enhanced dark mode tuning and more.

Google’s support period favors the Pixel 6 Pro, and although there have been update delays in recent months, OnePlus often has a sloppy track record at getting updates to devices as they age. You’ll be supported up to and including Android 15 on the Pixel 6 Pro and OnePlus 10 Pro, but Google will provide a further two years of regular security patches to its current-generation flagship.

This means that you’ll have some level of software support up to October 2026. Conversely, OnePlus will cease offering bi-monthly software updates at the same time. This will mean just four years of official software support compared to five years with the Pixel 6 Pro.

Despite claiming 30W maximum charge speeds, the Pixel 6 and 6 Pro’s “real” wired charging speeds are much lower. Disappointingly, even with the new charge brick, you can only achieve 21W and 23W peak charging speeds with the Pixel 6 and 6 Pro respectively. This is more annoying given that there is no charge brick in the box. OnePlus is still providing appropriate chargers for each region in the retail packaging for all devices, which stings further still.

In terms of lifespan, in our testing, the OnePlus 10 Pro and Pixel 6 Pro attain similar usage periods. The Tensor chip in conjunction with the Adaptive Battery settings could favor the Pixel as longevity improves over time, but a day of usage is par for the course across both smartphones. Being able to top up your phone from 0 to 100% in under an hour is certainly a major benefit for the OnePlus 10 Pro, which means increased usage without compromising.

On paper and in practice, the Pixel 6 Pro camera hardware setup is vastly superior to that found on the OnePlus 10 Pro due to the downgrades made on the latter device. In terms of camera software features, though, things are heavily in favor of the OnePlus with more modes, Hasselblad tuning, and Pro controls that the Pixel series has never offered directly.

If you want excellent zoom capabilities, the Pixel 6 Pro is a no brainer. Shots taken with the main wide lens also include greater depth with that signature contrasty appeal. The OnePlus 10 Pro has a good camera but not what we’d consider a “great” one. You get an interesting 150-degree ultrawide angle lens but this can produce quite soft images. The inferior telephoto zoom also lets the setup down somewhat.

It’s those added and enhanced modes where you may be interested in the OnePlus 10 Pro. Google offers a number of Pixel exclusive camera features such as Cinematic Pan, Live HDR+ video, Night Sight Portrait, and more but the OnePlus 10 Pro has many modes to play around with. Being able to capture 12-bit RAW images on every single lens is a big bonus, as is neat XPan mode, but the results can be mixed.

You can record video at up to 8K resolution, while there is even the ability to record video in the LOG format along with a Dual-View mode, which lets you capture the selfie and rear cameras simultaneously. It’s also worth noting that the OnePlus 10 Pro has a higher resolution selfie camera but can overexpose images more often than the Pixel.

Processing of photos and video is fast on both handsets but the end results are, more often than not, superior on the Pixel 6 Pro. It excels at point-and-shoot smartphone photography, with sharp, accurate stills and solid video. That said, the OnePlus 10 Pro offers good colors, and the Hasselblad tuning is certainly improving with each smartphone release.

Pixel 6 Pro vs. OnePlus 10 Pro: Which is the right smartphone for me?

For long time OnePlus fans, the past few years may have you looking over at the Google Pixel series with envy. Given the move away from the “Fast and Smooth” ethos that helped propel older OnePlus devices to the upper echelons of Android fans’ most wanted lists, it’s understandable that you may have cast your eye elsewhere.

The OnePlus 10 Pro is a great phone, but even with some software woes of its own, the Pixel 6 Pro usurps it in a few key areas. Given that the OnePlus 10 Pro and Pixel 6 Pro both retail for $899, you get a little more bang for your buck with the Google smartphone – plus that “clean” software experience that OxygenOS no longer offers.