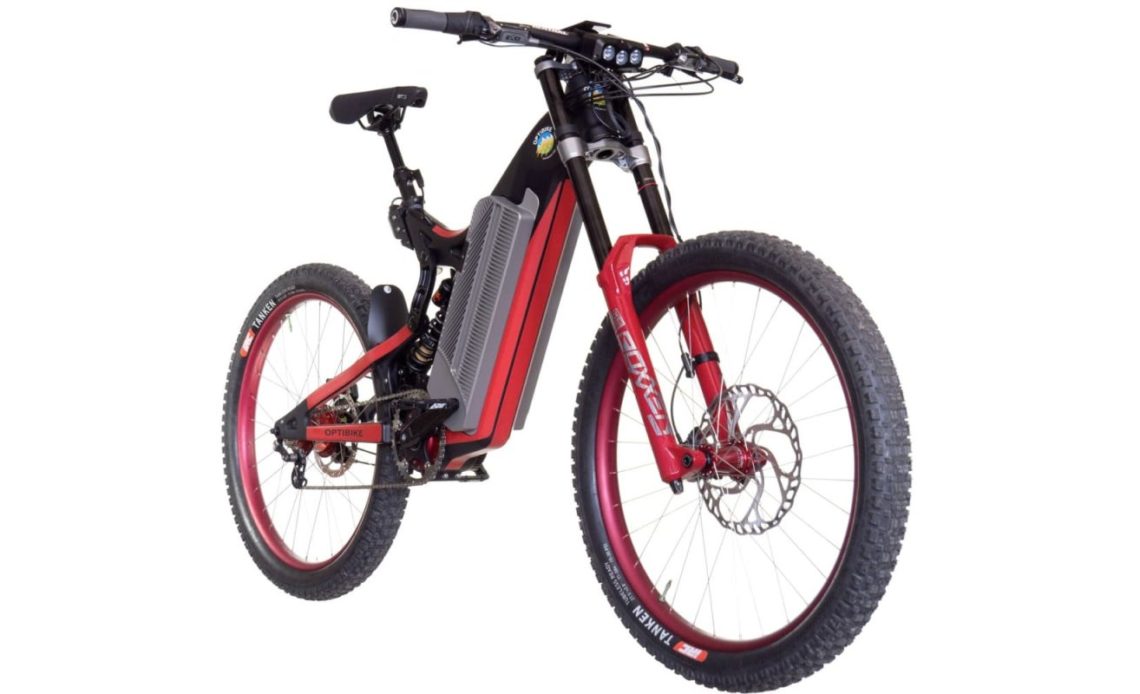 Colorado-based Optibike is one of the oldest electric bicycle companies in the United States, and so they know a thing or two about building high-performance e-bikes. But the new Optibike R22 Everest seems to go above and beyond what anyone could have asked for, claiming to have enough battery to climb Mount Everest on a single charge.

There may not be any good charge spots at the summit, but that should be fine. It’s all downhill from there.

Just how big of an e-bike battery does it feature?

There’s a whopping 3,260 Wh of lithium-ion cells stuffed into the carbon fiber full-suspension frame of the R22 Everest. The battery is designed in two packs that are removable from either side of the bike.

To put that in comparison, 3.26 kWh of battery is more than 6x the capacity of a common low-cost electric bicycle in the US.

Of course the $18,900 R22 Everest also costs around 27x the price of that , so I’m not sure these things track linearly. But if your goal is to climb up Mount Everest on an e-bike, price probably isn’t your first concern. If it were me, riding across those ladders might be higher on my “big worries” list.

But let’s face it: Most people aren’t going to be climbing up the world’s highest mountain on this e-bike.

Instead, the R22 Everest is designed for exploring rough terrain and accessing far-off destinations that other e-bikes wouldn’t be able to make. And climbing more reasonable mountains than the highest one in the world.

The R22 Everest is the result of my 25 years of designing and building E-Bikes, the R22 is my dream bike, born and bred in the Colorado Rocky Mountains. This bike sets a new standard for E-Bikes.

The company claims that the bike’s massive battery can do 24,000 feet of elevation gain on a single charge. Or for folks who like to measure their rides by horizontal distance instead of vertical, the R22 Everest boasts 300 miles (510 km) of range in pedal assist mode at 15 mph (25 km/h). But you better have some high-endurance legs to keep up 20 hours of pedaling for 300 miles.

For those that would rather give their legs a break, there’s also a half-twist throttle to operate the electric bicycle more like an electric motorbike, pedaling optional.

It may not actually scale the real Mount Everest, but it looks like it’d make it pretty darn far up there before being swallowed up by a crevasse.

The bike makes uses of Optibike’s proprietary 1,700 watt PowerStorm mid-drive motor with a crushing 190Nm of torque. That motor ties into a Rohloff Speed 500 internally geared hub with 14 gear ratios. In highest gear, it is said to offer a top speed of 36 mph (58 km/h), making this an off-road-only e-bike as far as US laws are concerned.

With a dual crown front suspension fork and 200 mm (8 inches) of rear suspension travel, this e-bike is designed to keep going when the trail has long disappeared.

Each R22 Everest is hand-built to order at Optibike’s Colorado facility. That sounds about right, since at nearly $19K, they definitely aren’t pumping these out on some cheap assembly line!