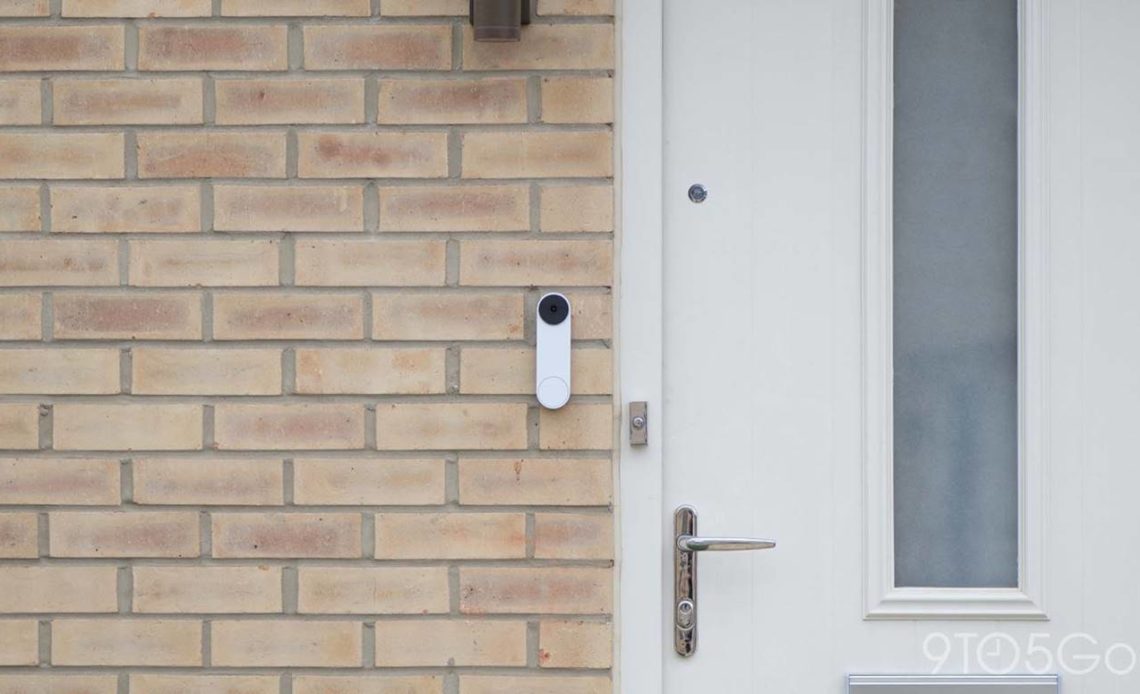 There are a vast array of wireless and wired doorbells that work with the Google Assistant and add greatly to your smart home setup. We’ve lived with the battery-powered Nest Doorbell for an extended period and here’s why it’s a great option for just about everyone — in the right situation.

A move to a new property meant I finally had the opportunity to add a front door camera for added peace of mind. We’ve all missed an important package, something I have done all too often.

While there are certainly cheaper options like Arlo on the market for ease of use it’s hard to look past Google’s first-party offerings. Are they worth it? This is our review of the Nest Doorbell (Battery):

Having never used another digital doorbell before, I decided when recently moving home that I finally needed to an early warning system for packages, post, and even take-out food delivery. I had my eye set on a far cheaper alternative than the Nest Doorbell but after some thought and some leftover Google Store credit, the battery-powered camera-powered door ringer was purchased.

A huge component in why I decided to pick up the battery-powered Nest Doorbell was the ease at which it could be fitted to the wall beside my front door. Just two screws were needed and as someone that is perpetually ridden with anxiety when DIY is required, this has felt like the perfect solution.

The sleek white model suits my home brickwork and because — once mounted — it sits flush against the wall, you’d be forgiven for thinking it was part of the house already. My major gripe is the fact that the doorbell button ring light could be a little more obvious in direct sunlight. Visitors seem to press the button eight out of ten times. Which is much lower than the ten out of ten that I’d like but still better in that I know someone is there. I’d wager that this can be alleviated with better placement near or around your door so I would suggest choosing where you mount the Nest Doorbell wisely.

If you are able, I would also suggest tweaking just how you point the camera. The 145-degree field of view is great but I can’t see the faces of people right at my door based on the placement suggested by Google during the initial set-up. Luckily, there is a wedge in the box that you can use to get a more door-centric view but in all honesty, I think seeing the person approaching my house is a better solution for me and where I live. For apartments and those with enclosed porches, you might want to try a few things out before committing.

It’s also still pretty important to note that you can’t access 24/7 recording with the Nest Doorbell (battery) even if you do manage to find a way to wire it manually. This means that the might not be as valuable unless you want to access up to 60 days of recordings.

I felt that the base recordings were enough for my needs and the onboard storage auto-clearing simplified things for me. However, the fact that it auto-clears after just three hours is absolutely criminal given that Google has marketed it as having three hours of storage. That would mean quite a lot of 30-second clips, but there is certainly a push here to get people to buy Nest Aware subscriptions. If you get a notification on your phone and it’s something notable, hit the details button and save it to your local storage as soon as you’re able or poof it’ll be gone before you remember to check back later.

Another frustration is that the Nest Doorbell also has to determine if something is an activation “event” before you can download video these clips. Most of the time it’s absolutely fine but it doesn’t always work 100% of the time.

Because it’s not quite perfect I often see the “This video isn’t available yet. Check back later” screen before it processes and I can view it correctly. Changing the bounds when people, objects, vehicles, and pets are detected does help but if you live in a busy area it can be a little overbearing with notifications pinging on your phone all too often. Downloading clips is fairly simple but the Google Home app just isn’t cut out for managing the nest Doorbell in its current form.

The history management and clip organization is fine but could be a lot better. On Pixel phones, the direct integration with the At a Glance widget is a key selling feature that other phones miss out on. You’ll get a mini gif preview when someone activates the Nest Doorbell, prompting you to unlock your phone or open the live video preview.

The “event detection” limitation for recording has been an annoyance for the couple of months or so I have been using the Nest Doorbell every day. That said, I figured that if I truly needed long-term storage, screen recording my Pixel display would suffice for live video but it would mean losing out on potentially important details if your doorbell hasn’t deciphered what is going on. In all honesty, I’d wager for most people that will be a fairly firm solution too. Although this shouldn’t be a catch-all answer when things are not working as they should or as you would hope.

At just 1080p, the video quality on the Nest Doorbell (Battery) is far from the most high resolution but it’s enough to make out just what or who is approaching your door. The night vision mode is pretty solid to boot but it does take a step down in overall clarity. Getting that notification ping that someone has a package or an animal is at your door is something I have really liked having access to more than anything else.

Being able to cast a live video stream from the doorbell to my office Nest Hub has been super helpful throughout the time it has been hooked up and linked to my account. I can tell FedEx, DHL, UPS, and more to leave packages on my doorstep before I head down to grab them. Having a pet, the Nest Doorbell has proved to be a godsend at times as everyone is safe during the package handover process. Just having that little early warning before someone arrives is why I have found this such a solid Google Home addition in particular.

As of a recent update, you’re now also able to stream live video from your Nest Doorbell to a Chromecast with Google TV or a supported Android TV device. Personally, I would love it if this could be integrated a little further. For instance, when I’m watching Netflix and a delivery person comes to the door, a live video of your doorbell could appear on-screen as an extra prompt to go and make your collection. It’s still pretty nice to have all of my Assistant-powered speakers announce that someone is at the door though, especially when I’m upstairs or in a far-flung location in my three-story house. The sound isn’t quite as shrill as a standard doorbell ringer either. The sound is softer and more relaxed.

As with any battery-powered piece of tech, the Nest Doorbell lives and (literally) dies by its lifespan. It’s not exactly much use if it runs out of juice when someone comes to the door. The pathway in front of my house has quite a bit of movement, so while I could set the motion detection to the low preset, I left it at the “default” setting.

This means I’m charging once every 3 to 4 weeks. When coming close to the lifespan limit, I’ll just detach and then leave it on charge for a couple of hours overnight and reposition on my outer wall first thing in the morning. For this reason, if you already have an existing wired doorbell — as I do — it’s certainly a companion rather than a solitary catch-all solution.

The big utility of the battery-powered Nest Doorbell is for people that live in rented properties or apartment blocks. You can just take the Nest Doorbell with you when you move. This means fewer issues and no destruction left behind. Sure, charging is an annoyance and there is certainly a risk that someone can unclip the camera and just make off with it. That said, it’s another option. An option that slots nicely into your existing smart home without many of the initial setup frustrations.

The Nest Doorbell is an acceptable entry-level product that is made all the more accessible by virtue of the battery-powered option. Even if you have an existing wired doorbell, it’s still a nice companion if you don’t want or need 24/7 surveillance. In my experience, working from home, it’s simply a forewarning that someone is coming to the door to drop off a package and, for me, that is more than enough. If you are entrenched within the Google Home system, then it’s a little better albeit somewhat pricey.

Not having to wire in just to set up has been another huge bonus. For those leasing or renting, it’s a non-destructive way to expand your smart home tech with the added bonus of adding some very basic extra security.

You get more functions and features with a Nest Aware subscription, which is something that I’ve actively held off subscribing to in the time I have been using the Nest Doorbell. However, just as a simple expansion of your everyday smart tech, it just about makes a case for its inclusion in some quite specific circumstances.

If you don’t need access to multiple days of recordings or want 24/7 streaming, then it’s a decent but ultimately imperfect solution best suited to those that want a little bit of Google Home cohesion without overly destructive installation.