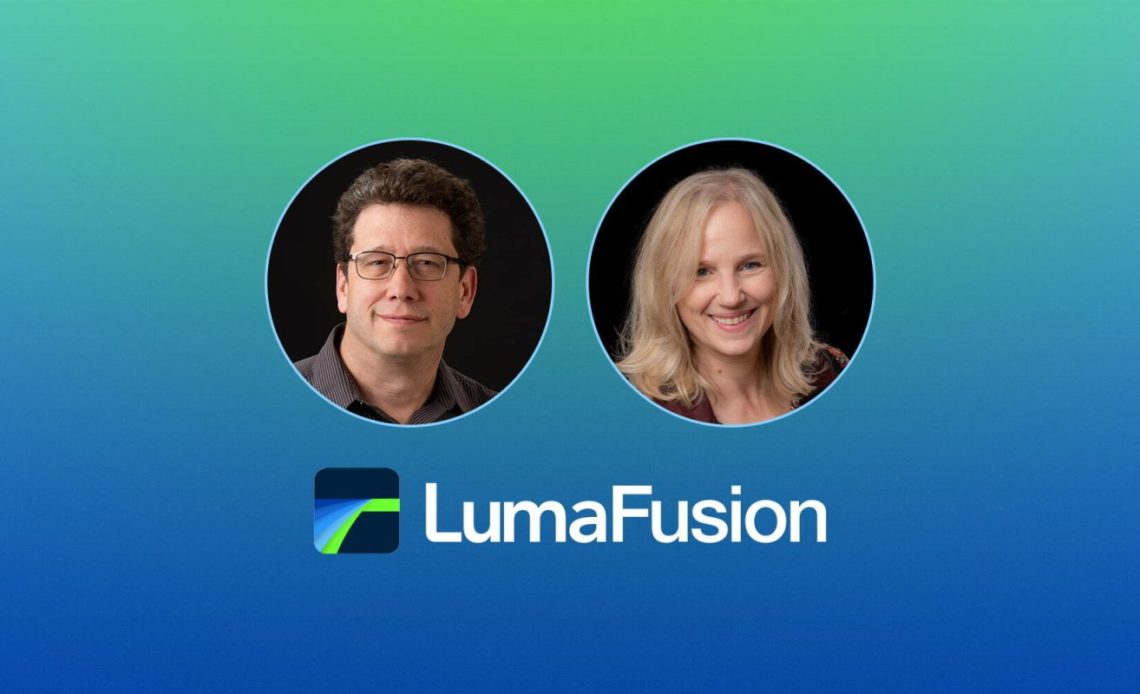 WWDC 2022 kicked off a couple of weeks ago. With the new operating systems just announced and developers already testing what’s coming next with iOS 16, iPadOS 16, macOS 13 Ventura, and more, 9to5Mac interviewed LumaFusion creators Terri Morgan and Chris Demiris about Apple’s new features, how they can help improve LumaFusion experience, and what the powerful video editor app is bringing ahead of these operating system updates later this fall.

iPadOS 16 is facing some controversy with the main features being exclusive to the M1 iPads, but at the same time, this new operating system will finally bring Pro users more ways to take advantage of a bigger display, a more powerful chip, and touch capabilities.

For the award-winning LumaFusion and its focus on the iPad’s screen, both of the cofounders think Reference Mode can be a really nice addition.

“One of the big features with iPadOS 16 is Refrence Mode. Apple featured LumaFusion when showing it off, since it’s using the iPad to better visualize HDR content. We already have a HDR workflow for quite a while, but being able to visualize how it’s going to look like in the final TV was kind of difficult, so this will be a nice addition,” said Chris Demiris. “One of the areas we’ll probably be working on is using a second monitor on a Mac or the iPad as a reference to try to take advantage of this feature.”

The Stage Manager function was also mentioned by them. For Terri Morgan, this function can open up new capabilities thanks to the new external display support.

At first, I was a bit worried about Stage Manager. What I love the most about iPad is the ability to focus on what I’m doing. This feature could allow us to put in parts of the UI on an external monitor, for example, have a info panel or library, and have the experience of both touch and expansiveness of a desktop display.

Both Demiris and Morgan think since its early days, LumaFusion helped bypass the iPad limitations and they’re seeing, little by little, Apple improving the experience with new software updates.

“Continuity and similarity between platforms show that Apple is readying that direction with iPadOS 16 and macOS 13 Ventura. But for us, the touch interfacel feels different, LumaFusion focus has always been on the tablet,” says Chris Demiris.

“I worked as an editor for a long time, I know what are the limitations editors face. Sometimes you think a change will take many years, and in just a few, everything is different. Why would a carry a laptop if I can have a better display, better battery life, and instant turning on and off with an iPad? Apple is really good at bringing features that we can use with LumaFusion,” says Terri Morgan.

LumaFusion 3.1 is just around the corner – and Multicam is coming next

While iPadOS 16 is in its early days of beta testing, LumaFusion has been heavily working on update 3.1. It will bring Scopes, multiple Lut, waveform, histogram, different channels, multiple chromakey, and color effects, as well as “hundreds of small bug fixes.”

The long-anticipated Multicam experience was previewed a year ago during the M1 iPad Pro announcement and it’s coming soon, just after update 3.1.

With Multicam sync, it will be easy to sync multiple video and audio sources allowing for a streamlined edit. The editor will be able to automatically sync up to 12 video sources and multiple audio sources.

“We have been working for a long time in Multicam. it’s not your usual multicam experience with a lot of clicking and switching. In LumaFusion, we’ve taken this function in a different way where you can throw your clips in, add master audio, mapping, and more,” said Morgan.

“With LumaFusion, you can go back and forth and edit the content in a way you can’t in other apps. We give users a lot of flexibility and then we see how the editor will use them,” Demiris added.

From Apple to Google, an Android future coming to LumaFusion

LumaFusion creators also teased that they’re working on an Android app that will work with modern Chromebooks, tablets, and some high-end smartphones, most likely coming next year. For Demiris, bringing LumaFusion to the Android ecosystem opens a different set of challenges.

That said, over these past few years, LumaFusion went from an iPad-only app to the iPhone, M1 Macs, and in the future, Android devices.

“Our focus has always been o the tablet, but 40% of our users are on iPhone. They use their phone to capture footage and edit right from their phones, without ever opening the iPad app,” says Chris Demiris. Update 3.1 will clean some areas for thos using an Apple silicon Mac. We are improving the drag an drop feature, broguht keyboard shortcuts just to continue improving that experience. That said, our focus is still on a touch interface, we don’t want to forget that, neither that our customers do.”

Wrap up and what the future holds

While LumaFusion has been teasing Multicam support for over a year, there’s more the company is planning to bring in the future, as both Demiris and Morgan say they have a lot more coming after update 3.1.

Advanced keyframing and spatial and temporal curves are coming. Subtitles are also “a great big area,” according to Morgan. “All these things are coming, we are just finding better ways to bring them,” notes Demiris.

LumaFusion is available for iPhones, iPads, and Apple silicon Macs. It costs $29.99 but also features in-app purchases for advanced workflow functions. You can find it here on the App Store.