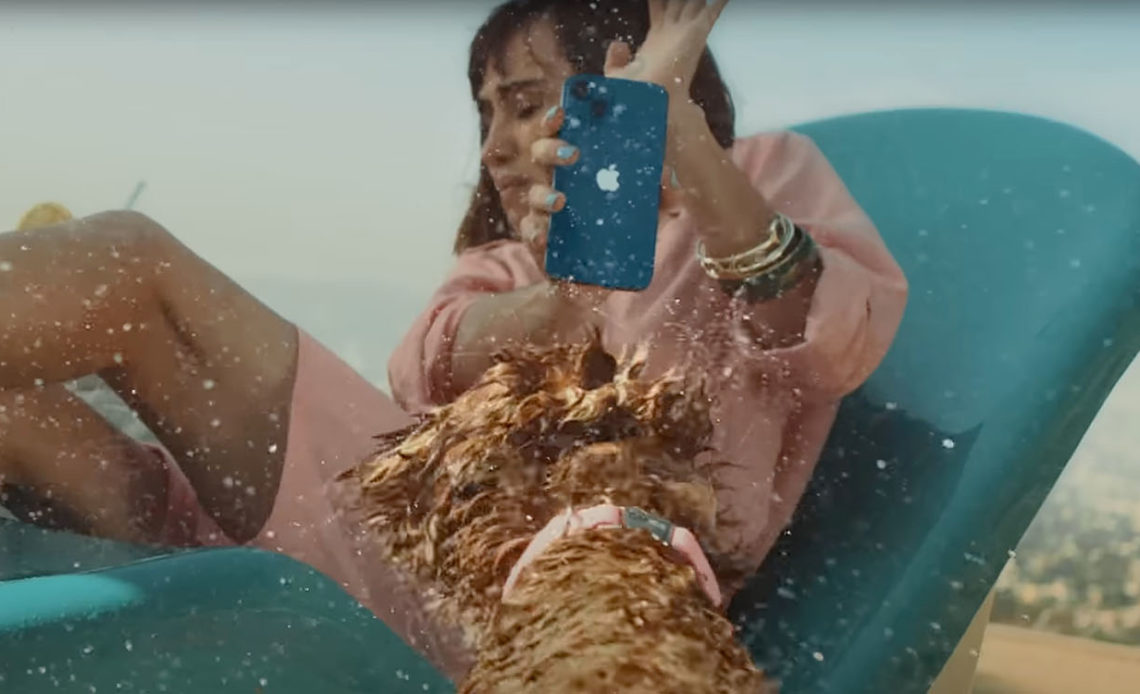 Apple has today posted two new iPhone 13 videos to its YouTube channel, one promoting the Ceramic Shield toughened glass, the other the phone’s ability to cope with water splashes.

Both ads use the ‘Relax, it’s iPhone’ slogan first used for the iPhone 12 …

“Edge” shows a close-up of an iPhone overhanging the edge of a table. It receives an incoming call, and the vibration starts it moving further and further over the table edge. The camera angle moves down until we are viewing the phone from underneath. A further vibration sees it fall past the camera, and we hear it hit the floor. The slogan ‘Relax, it’s iPhone’ appears, and then we hear it continue to vibrate. We don’t ever see the phone on the floor.

“Shake” shows a woman sitting in a lounger at the side of a swimming pool, with the music Cold as Ice by Bekon playing. A dog laying next to her eyes the pool, then jumps in. It swims around, climbs out and comes to stand next to the lounger, looking at the woman. Her eyes widen, and the dog then shakes itself, with water flying in all directions. The video shows a lovely slow-motion view of this. The slo-mo continues as we see water droplets land on the rear of the phone. The woman shakes the water from the phone, and the “Relax, it’s iPhone” slogan appears.

You can watch both iPhone 13 videos below.

We first saw the “Relax, it’s iPhone” slogan used to promote the durability of the preceding iPhone 12, in March of last year.

In the ad named Cook, a clumsy cooker tries to learn a recipe while reading the steps on his iPhone 12. The result is that he spills lots of sauce on the iPhone, fills it with flour, and hits the smartphone with a pepper grinder too many times. When the ad is ending, the cooker drops his iPhone 12 one more time in the sink then cleans it with running water. “More durable than ever. Relax, it’s iPhone,” is how the commercial ends.

The slogan was used in another durability ad later the same month.

Named “Fumble,” the fun 30-second advertisement shows a woman accidentally dropping her iPhone on the street while talking on the phone. The iPhone 12 falls into the ground, and as you might expect, nothing happens to it. “iPhone 12 with Ceramic Shield. Tougher than any smartphone glass. Relax, it’s iPhone,” says Apple in the video description.

It was again used in July of last year for an ad, in which a farmer loses an iPhone in a haystack, and uses his Apple watch to ping it in order to locate and retrieve it. Apple subsequently removed these older ads from its YouTube channel, likely to avoid people getting confused between older and current models.

Even with the iPhone 14 expected to land in September, the iPhone 13 continues to sell well.

The volume growth in the ultra-premium segment was driven by Apple and Samsung. The iPhone 13 Pro Max and the iPhone 13 Pro together captured over two-thirds of sales volume within the ultra-premium price segment. This was driven by strong volume growth in the US, China, and Western Europe. In China, the sales in the >US$1000 price segment grew 176% YoY in Q1 2022. The segment alone captured over one-fifth of China’s smartphone market value during the quarter. Apple emerged as the biggest winner from Huawei’s decline in the premium market.