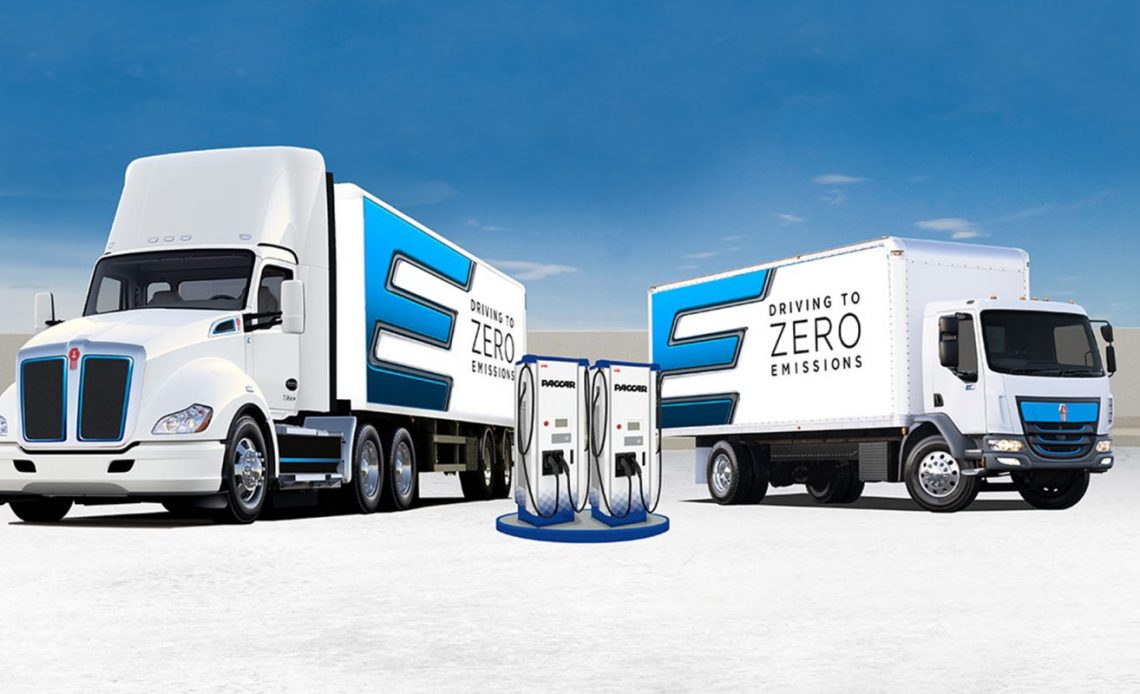 Kenworth Truck Co. recently shared news of tremendous growing interest in its lineup of all-electric medium and heavy-duty trucks, noting that orders have tripled the last 90 days as fleets look to take advantage of sweet incentives for zero-emission vehicles.

Kenworth Truck Company is a US truck manufacturer and subsidiary of PACCAR that also owns big names like Peterbilt Motors. The Seattle-based trucking company specializes in Class 8 heavy-duty and Class 5-7 medium-duty commercial vehicles, bringing nearly 100 years of experience to the table.

In 2021, Kenworth entered production of a new “E” line of all-electric trucks including K270E K370E medium-duty models, and the Class 8 T680E that was recently showcased in Las Vegas at CES 2022.

With a growing lineup of battery electric trucks being produced, interest from commercial customers has continued to grow as they discover the benefits to total cost of ownership for electrified fleets. Oh, and huge sales incentives over $100k don’t hurt either.

News of the influx of electric truck orders was reported by Freightwaves, alongside a media demonstration at the PACCAR innovation center in Sunnyvale, California, that included rides in the K270E and T680E.

Hank Johnson, Kenworth general sales manager for vocational and medium-duty trucks, told the outlet that the truck company has already taken orders from every region of the US, and most of Canada. Additionally, Johnson noted that Kenworth has offered quotes to customers in 44 of the 50 states. Johnson elaborated:

When we started this, we focused on the West Coast where the significant grant money resided. But to our surprise, there has definitely been a lot more activity outside of those states than we originally anticipated.

Johnson is referring to California’s Hybrid and Zero-Emission Truck and Bus Voucher Incentive Project (HVIP), which allows Class 8 trucks that can be classified as ZEVs to be eligible for an incentive up to $120,000 per vehicle.

Although interest is rapidly growing, the orders themselves remain relatively small in size – averaging in the dozens. Johnson once again spoke to fleet electrification process:

What they [fleet customers] are typically doing is [managing] the truck through different applications, through different routes. They’re going to try to figure out which one works better for them, and then it will become a permanent piece of their fleet, and the next truck, assuming the performance is good, will stay in the fleet.

While maintenance and fuel savings are projected to be 30% lower compared to traditional diesel trucks, there are still some hurdles for some commercial customers, especially in terms of charging infrastructure. Johnson again spoke:

It literally could depend on what was the infrastructure underneath the ground to your site. Did you just put it in five years ago and it’s all up to code and there’s excess capacity for you to add a charger, then the investment on the infrastructure there could be low. But if you’ve been somewhere down near a port for 70 years and nobody has [put] a new transformer in, that could be significant. It really does depend on what you come to the market with.

Meanwhile, five other states have adopted California’s Advanced Clean Truck regulations, while several more offer their own grants – many requiring a one-for-one exchange to get dirty diesel trucks off roads more quickly.