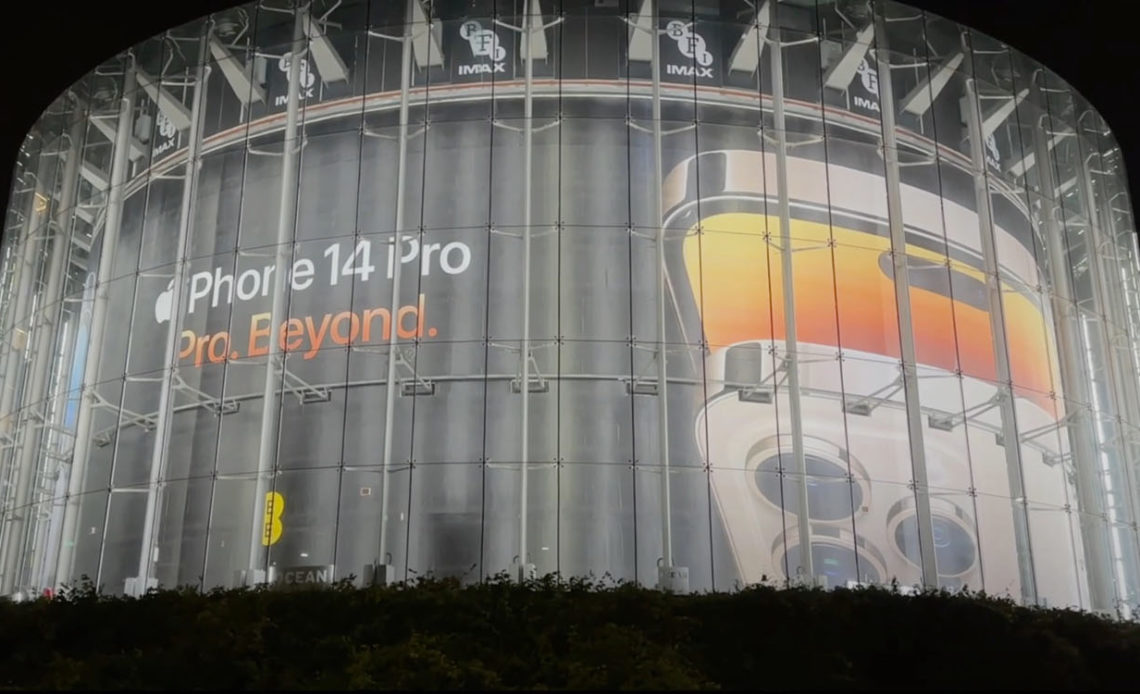 After starting with still photography, it was time to put my iPhone 14 Pro Max video capabilities to the test – and I was incredibly impressed with how well the camera performed, especially at night.

Ok, it’s still not going to be replacing cinema cameras anytime soon, but my experience gave me a lot to think about …

For this shoot, I used the FILMic Pro app, for the extra control it offered over Apple’s stock Camera app. That’s because my Diary pieces reflect my real-life usage of my Apple devices, and this shoot was a test I wanted to carry out for my own benefit.

The tl;dr explanation is that I very much enjoy video projects, but they are a lot of work, so I’m shooting fewer of them than I expected. Part of that is the logistics and effort involved in transporting and setting up my filmmaking kit, so I wanted to see whether it might be realistic to shoot outdoor footage with my iPhone.

That’s not a question I expected to answer in the space of a single shoot, and I will be doing more experimentation, but I have to say I was very much encouraged by the results.

FILMic Pro allows complete manual control over ISO, white balance, and shutter speed – and offers better control over exposure and focus point, including the ability for manual rack-focus. If I were to shoot anything approximating serious video with iPhone, it would be with this app.

One of the biggest challenges for smartphone-sized sensors is low-light video. For this reason, while I have included a fair amount of this.

I shot a mix of slo-mo footage and timelapse/hyperlapse, with only a little real-time footage. That’s again because this reflects my real-life experience when shooting outdoors. Most real-time footage I shoot indoors, with lighting.

Let’s start by taking a look, then I’ll talk through my thoughts about it. Note that the video is straight from camera, with no color grading at all.

With all framegrabs below, click to view full size.

With such a small sensor, there was no surprise about the first two drawbacks: noise in low light, and limited depth of field control. But the iPhone 14 Pro Max performed significantly better than I expected in both respects.

In daylight, and good indoor light, the footage is incredibly clean. In very low light, then we of course see noticeable noise – but as I mentioned, it’s less than I expected.

With a tiny edit, there’s a lot of recoverable shadow detail in the footage. It’s still muddy, but I would say not dramatically more so than similar shots with a mirrorless camera:

The Covent Garden Market shots really impressed me. Obviously you’ll see motion-blur in a still, but the dynamic range is excellent, capturing the well-lit face and dark background:

Again, a little bit of shadow recovery shows how much detail is available:

(You can push it more than this, but this much is already starting to lose the night-time feel, so I wouldn’t want to.)

The classic workaround for this is to position the subject reasonably close to the camera. In this case, I started close, locked the focus to her face, pulled back, and then moved back in. A more reliable method is to start close, pull back and then reverse the footage in the edit, but that would have had the bus on the bridge reversing.

When you’re further away, you have extremely limited control. But, again, the background separation was better than expected:

I’m honestly not sure whether this is all natural, or whether there’s some computational photography going on, but the focus fall-off certainly looks natural.

I’ll also try Cinematic Video mode again, to see whether this has improved to any worthwhile degree.

I expected to use a gimbal for this shoot, but in fact found I didn’t need to.

Admittedly that’s partly because slo-mo footage smooths things out to a significant degree, but take a look at the Waterloo Station clip at 0:31-0:35. That’s so steady it could almost have been shot on a tripod. Other shots depend in part on how smooth my handheld movement is, but I was extremely surprised by just how stable the shots look. This does not look like a handheld video.

I mentioned this back in 2019 when shooting with the iPhone 11 Pro.

One weakness I did notice is that there are quite a lot of internal reflections when there are lights in the shot. For example, when panning up in the book store, the rainbow-shaped crescent of lights are reflections of the balcony ones bouncing around inside the lens array. I see a lot of similar reflections in other clips.

The issue has steadily improved, but you still see them in some shots. They don’t capture well in stills, but check out the shot at 2:19 to 2:23. It definitely happens a lot less than it used to, but I’d still like to see more work done on the lens design to further reduce it.

The iPhone 14 Pro [Max] of course isn’t comparable to a cinema camera. Once you start pixel-peeping, it’s not difficult to find flaws, especially in low-light.

But it is quite remarkable to me how close the video performance now gets to a mirrorless camera. So much so that I think it comfortably passes the travel video test as well as the travel photography one.

For more serious work … well, it depends. You have to decide your own quality threshold. I know some people who would dismiss it for anything bar amateur video, and others who will comfortably use it as part of their camera armoury, especially in decent light.

But it gave me pause for thought for three reasons …

First, if you’re shooting in a “public” place which is actually private, then a serious camera tends to attract serious attention. Try to shoot in an Apple Store with a cinema camera, and I’m pretty sure someone is going to come and ask you what you’re up to. Doing it with my iPhone, nobody cared. Same in other pseudo-public places around London.

So if you’re looking to do guerilla-style shooting in a big city, then there’s a lot to be said for doing it with an iPhone.

Second, cinema cameras – even entry-level ones like mine – are bulky and heavy by the time you’ve rigged them out. That’s a considerable deterrent when it comes to getting street shots, and of course it’s not something you would ever carry “just in case.{” So if I’d been creating this video with a cinema camera, I’d have done less walking, and gotten fewer shots. As the old saying has it, the best camera is the one you have with you.

Shooting with my iPhone was quick, easy, and hassle-free – so there’s no doubt that I’m going to do more of it. How far I’ll push that remains to be seen, but this was a really fun experience, and I’m looking forward to doing more iPhone shoots in future.

Which brings me to the third thing. Getting good at anything requires practice, and the more experience you get, the more you’ll learn, and the better your results. Video is time-consuming, and so acquiring experience is a slow process, as I’ve found.

But the fact that shooting with an iPhone is so quick and easy means that you can accelerate that process. With typically no more than 10-20 seconds of setup – choosing my video mode, setting the exposure and focus point(s) – I’m ready to shoot. I can try an experiment, and very quickly discover whether it works. An idea can occur to me while I’m mobile, and I can try it, there and then.

So I think shooting with an iPhone is going to make me a better videographer, faster. That’s a huge benefit.

That’s my experience – how about yours? Please share your thoughts in the comments.