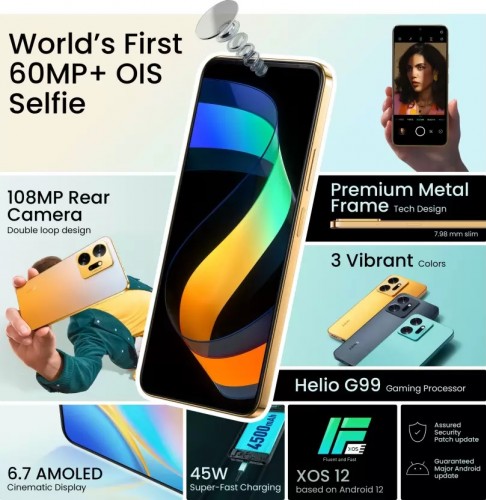 The Infinix Zero Ultra unveiled in October debuted today in India with the Infinix Zero 20 announced in September. The Zero Ultra comes in a single 8GB/256GB configuration with two color options – Coslight Silver and Genesis Noir. It has a special launch price of INR29,999 ($360/€340) and will go on sale in India starting December 25 through Flipkart.

The Infinix Zero 20 is also offered in a single memory configuration, having 8GB RAM and 128GB storage onboard. It comes in Glitter Gold, Space Gray, and Green Fantasy colors and will be available for purchase starting December 28 through Flipkart with an introductory price of INR15,999($195/€180).

The Infinix Zero Ultra is powered by the Dimensity 920 SoC and runs Android 12-based XOS 12 out of the box. It’s built around a 6.8″ FullHD+ 120Hz curved AMOLED display with a fingerprint reader underneath and a centered punch hole for the 32MP selfie camera.

Around the back, it has a 200MP primary camera with OIS, joined by 13MP ultrawide and 2MP depth units. The Zero Ultra has 5G connectivity and packs a 4,500 mAh battery with 180W wired charging, making it the fastest-charging smartphone in India. Infinix says the Zero Ultra can charge from flat to 100% in 12 minutes with the bundled GaN charger, but real-world results may vary depending on various factors.

The Infinix Zero 20, on the other hand, has the Helio G99 chip at the helm and packs a 4,500 mAh battery with 45W wired charging. It’s a 4G smartphone that boots XOS 12 based on Android 12 and sports a 6.7″ FullHD+ 90Hz AMOLED screen. There’s no fingerprint scanner under the display, though, since it’s embedded in the power button located on the phone’s right side.

The Infinix Zero 20 comes with four cameras in tow – a 60MP selfie camera with OIS+EIS on the front, with a 108MP primary camera on the rear accompanied by 13MP ultrawide and 2MP depth cameras.