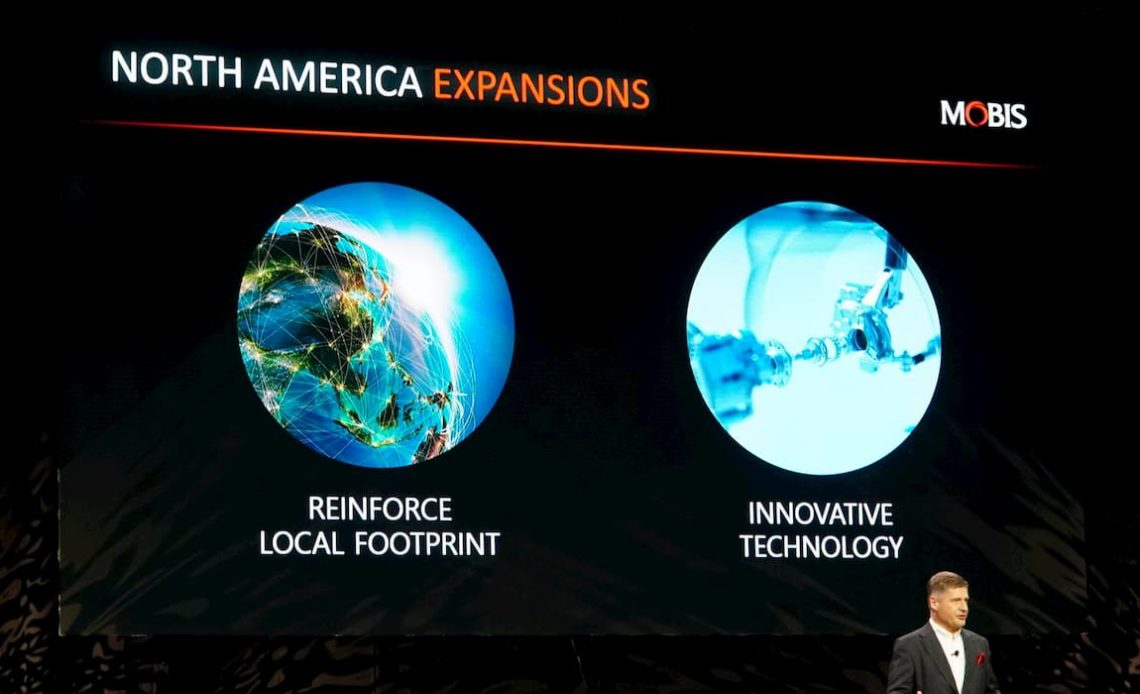 Hyundai Mobis, the parts and tech provider for South Korean automakers Hyundai, Genesis, Kia, and others, revealed its North American EV expansion strategy. As demand for electric vehicles continues growing, the sixth largest global parts supplier says having a strong production capacity will be critical, which is why it’s rapidly increasing its capabilities.

Founded in 1977 as the Hyundai Precision Industry, the parts supplier later changed its name to Hyundai Mobis in 2000.

Like Denso and Toyota’s relationship, Hyundai Mobis provides a wide range of parts and technology, such as vehicle chassis, safety products, and electronic stability control components for the Hyundai Motors Group, including Kia and Genesis.

Compared to other auto parts suppliers, Hyundai Mobis is still relatively young, but it is gaining ground as Hyundai and its subdivisions grew to become the third largest automaking group in terms of global sales volume (3.3 million through the first half of 2022), behind Volkswagen (4 million) and Toyota (5.1 million).

Furthermore, the auto supplier, which exclusively sold to the Hyundai group at first, opened up sales to other automakers such as Ford and GM. In fact, Hyundai Mobis was just named GM’s supplier of the year for the fifth consecutive year.

Hyundai Mobis has been a leader in electrification and EV components, introducing innovative technology like its e-corner module prototype that combines steering, brakes, suspension, and driving systems.

The South Korean automaking group is seeing success thus far in selling EV models (27,000 through May), including Hyundai’s IONIQ 5 and Kia’s EV6. It plans to capture 7% of the global EV market (1.87 million in sales) by 2030, with several EV models releasing across all brands. Hyundai recently announced plans to speed up its timeline to build EVs in the US.

It looks like its tech and parts division will follow suit as Hyundai Mobis unveils its plans to rapidly expand in North America.

After President Biden signed the Inflation Reduction Act, among other climate initiatives into law, it’s creating a hot spot to build EVs and source battery components in the US.

Hyundai Mobis will construct more EV dedicated sites here in the region, and we will invest in EV components, and battery system assemblies to allow rapid and environmentally optimized local production.

With this in mind, Hyundai Mobis has four production facilities in the US in Alabama, Georgia, Ohio, and Michigan so far, and plans to introduce a new “EV components” manufacturing site to build on its momentum.

On top of this, the South Korean auto supplier revealed its game plan to boost North American sales with new technology, including:

Hyundai Mobis was quick to point out its success in mass-producing other EV components, such as the battery systems for its e-GMP platform, to assure its confidence in the upcoming transition.

The tech supplier has been growing steadily over the past few years, with total order volume reaching $1.7 billion in the first half of 2022, compared to $660 million in 2020.

Hyundai Mobis and the entire Hyundai Motor family of brands are making swift progress transitioning to electric, and the results are showing. Sales of Hyundai EVs continue climbing while its tech and part supplier, Hyundai Mobis, introduces innovative new technology to push the market forward.

With some of the most advanced technology and cost-effective EV models, I expect their success to continue. Keep an eye on Hyundai and its network of brands as the EV race builds momentum.