How photographers used a robotic camera system, a Nikon Z9 and a 100-400mm lens to shoot the World Cup 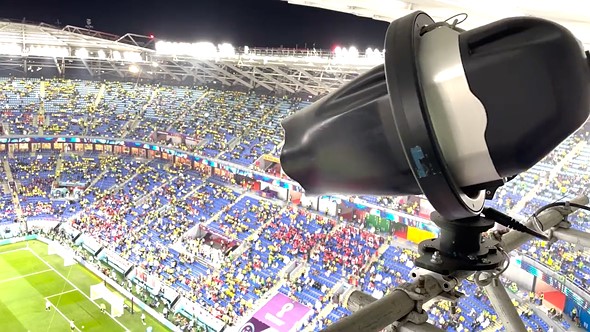 To help capture additional views of the on-field action, Kose and Kirk used Robotic Pod units from Mark Roberts Motion Control (MRMC) with Nikon Z9 cameras and the new Z 100-400mm F4.5-5.6 VR S telephoto zoom lenses inside. Inside the pod are a pair of motors that control both the zoom and focus of the lenses, while software controls most every feature on the camera. The pan/tilt/roll gimbals the Robotic Pod units are mounted on are the PTA-1 Robotic Arms from MRMC, which are IP65-rated and can support up to 25kg (55lbs).

In addition to manual override using a third-party PlayStation video game controller, the system can automatically track specific players using up to ten various points of the human body as well as the ball itself using the sensors FIFA and Adidas put inside the match balls to help officials determine if the ball crossed the goal line or if a play was offside (players also had sensors in their kits).

A video of our AFP robotic cameras that we are using currently during FIFA World cup 2022 in Qatar. Great technology. It can even follow aıtomaticly players which we choose. @AFPphoto @AFP pic.twitter.com/pQtTVgwW9r

These robotic systems from MRMC have been used in various sporting events over the years, with some being permanently installed at various sporting venues around the world. Back in 2020, Nikon Professional Services (NPS) installed five Nikon D5 Robotic Pods around the Boston Red Sox’s iconic Fenway Park stadium to capture the on-field action and since then, the systems have been used to capture shots photographers otherwise would not have been able to shoot from, either due to logistical or safety concerns.

While you may have missed your chance to photograph the 2022 World Cup, countless more sports are always on the horizon. Fortunately, while pros opt for expensive professional cameras, a good camera for sports and action doesn’t need to break the bank. Check out our new guide, ‘Best affordable cameras for sports and action in 2022,’ to learn more about your options.