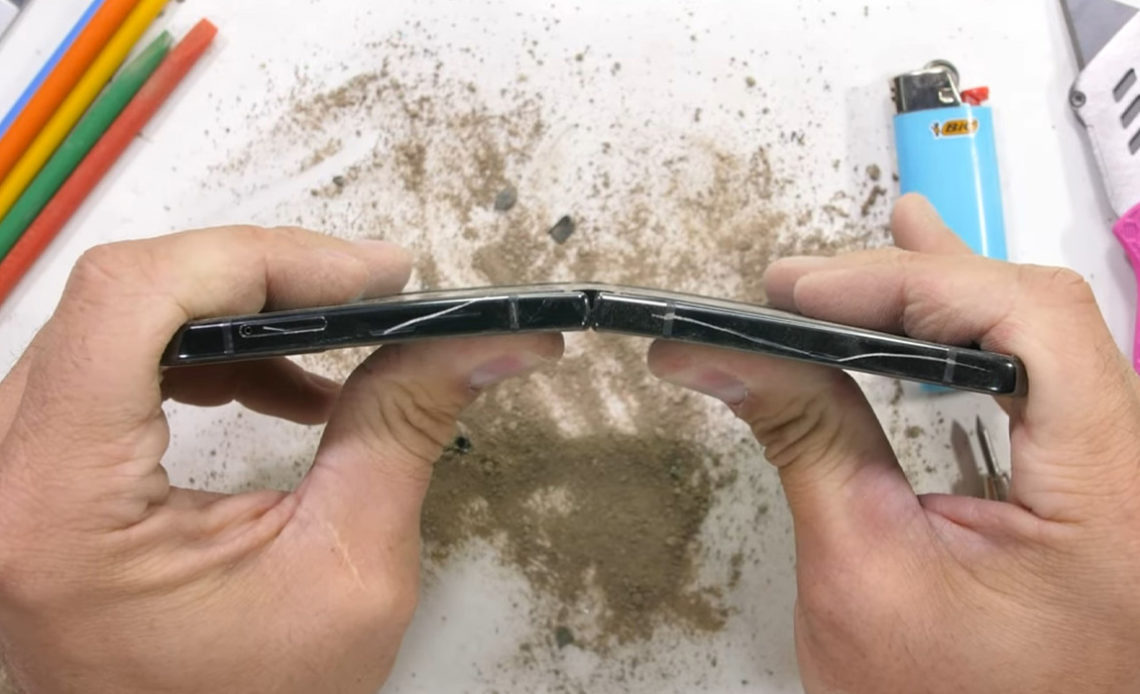 The Galaxy Z Flip 4 is a marvel in itself, and while it seems like the physics-defying phone is fragile, the Flip 4 can take a beating. That is, until you try to break the Z Flip 4 in half in a torture test.

In his latest video, Zach from JerryRigEverything takes the Z Flip 4 into a whirlwind of torture and durability tests. The tests include checking the phone’s resistance to scratches and hard, abrasive objects and applying physical pressure to the device.

To start off, the screen is sized up with several hardness-testing tools. As the number goes up, those picks become harder and harder, which gives a good idea at the hardness resistance the phone’s display has. Unfortunately, Samsung’s UTG (ultra-thing glass) can’t live up to anything past level 2. Of course, you sacrifice durability for flexibility, and the Z Flip4 has a lot of flexibility.

In this sequel to the Fold 4 torture test, the Z Flip 4 gets the same dirt-bath treatment. In the video, dirt is poured onto the inner display and spread around. After that, the device is closed fully and flipped, exposing the outer hinge, wherein more dust is poured on. Unsurprisingly, the Galaxy Z Flip 4 holds up well to the onslaught of micro foreign objects encased in the hinge.

What’s possibly the most interesting part about the whole test is the final trial: the bend test. The Z Fold 4 underwent the same test, in which the device is opened fully and bent in the opposite direction of natural travel. The Z Fold 4 held up surprisingly well and didn’t seem to budge. The Z Flip 4, on the other hand, didn’t experience the same fate.

At max open, the device was resisting any further travel. After several seconds of pushing, the Flip 4 popped and the hinge gave way to a couple more degrees. After that, the Flip 4 suffered a couple of resulting issues. First, the phone now opened up to about 185 degrees rather than the straight 180 degrees. To add, the Flip 4 no longer closes completely unless forced to do so.

More than likely, one of the channel keys in the Flip 4’s new hinge design popped out of place and no longer resists at full-open. Whether or not this is a flaw of the more efficient hinge design with channels instead of gears, we’re not sure. Previous Z Flip and Fold torture tests on the older hinge design didn’t result in this issue.

While this is just a little bit scary, the odds of this happening to your Galaxy Z Flip 4 are pretty slim. That being said, you should never slide the open Flip 4 into your pocket, because the resulting damage might just be a broken hinge.