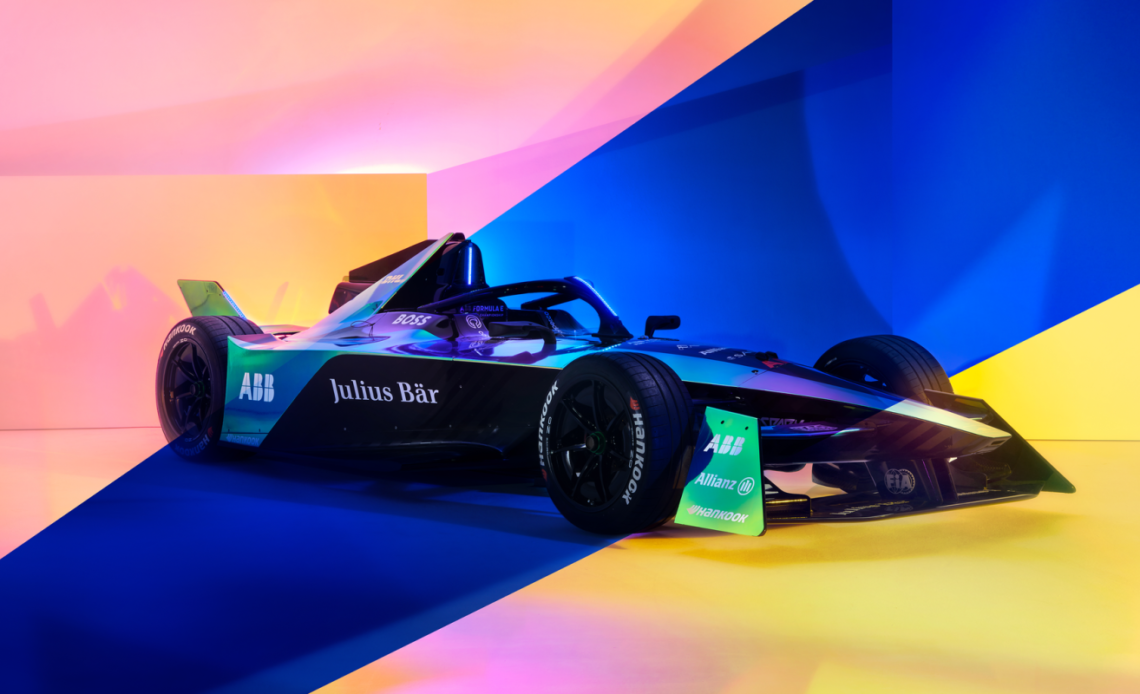 Formula E has revealed the much-anticipated “Gen3” car, which will race in the 2023 season, with significantly improved performance over the current Gen2 cars. And an angular body which is – let’s say – “polarizing.”

The unveiling happened in Monaco ahead of this weekend’s Monaco ePrix, where racing commences on Saturday morning (check here for ways to watch).

The new car has 40% more power and 15% higher top speed than the current Gen2 car, with 60kg (132 lbs) of weight savings and more than double the regenerative braking capacity from a new dual-motor powertrain.

The switch from Gen1 to Gen2 heralded significant racing improvements, as the cars looked much faster on the road – and resulted in several seconds faster laptimes. Gen2 cars were also more energy-dense, allowing them to finish a full race distance – previously, Gen1 cars would be swapped out mid-race for a new car with a full battery.

The shift to Gen3 promises another leap in the excitement of Formula E racing, along with another change in racing format.

In Gen3, cars are capable of ultra-fast 600kW charging, faster than any commercially-available charging system today. This may allow cars to stop briefly for a pit stop mid-race to recharge the batteries, but mainly it allows the Gen3 car’s dual-motor system to use its full 600kW system capacity for regenerative braking. Formula E hasn’t announced the specifics of mid-race charging yet, but the cars at least have the capability of it, so we might end up seeing that when the season starts.

This additional regenerative braking capacity has allowed Formula E to delete the rear hydraulic brakes from the vehicle, the first formula car to do so. Most formula cars have both front and rear brakes, with most braking action happening on the front axle but the rear axle being very important to help get the cars stopped quickly. Now, rear braking will be handled fully by the rear 350kW motor and no friction brakes at all.

This is also the first formula car with two powertrains, both on the front and rear axle. A handful of F1 cars have tried four-wheel-drive in the past, but by and large formula cars are solely mid-engined, rear-wheel-drive vehicles. An all-wheel-drive Formula E car will be a totally new experience for drivers, completely changing the nature of mid-corner and corner-exit handling.

Crucially, the cars are also shorter and narrower, which may help facilitate better racing on the tight street circuits Formula E races on. Narrower cars means it’s easier to fit two or three cars side-by-side on a street or through corners.

Formula E has also focused on sustainability of the new cars, implementing a number of changes that will reduce the series’ environmental impacts.

The series is now using linen and recycled carbon fiber in its bodywork, which is nice to see given the significant amount of splintered carbon fiber that ends up on the track after contact between vehicles. 26% of tire material will be natural rubber and recycled fibers, reducing the amount of oil used for rubber, and all tires will be recycled after racing. The battery promises to be made with sustainably-sourced minerals and Formula E plans to reuse or recycle battery cells at end of life.

Not to mention the inherent sustainability of electric drive, with drivetrains that are 95% efficient. This is much more efficient than the total system efficiency of F1, which even with their best kinetic and thermal energy recovery technology only reaches around 40% – 12 times more energy loss than the Formula E drivetrain.

And with the Gen3 car, around 40% of energy used in a race will be recovered through the car’s 600kW regenerative braking system. This is somewhat of a meaningless metric (remember the first law of thermodynamics – this energy is not being created by the car, merely recaptured when it would otherwise be lost to heat and noise by friction brakes), but its just another way that electric motors are better able to use a limited energy supply by recapturing instead of wasting kinetic energy.

This weekend’s Monaco ePrix is a marquee event for Formula E. The Monaco track is one of the most historic and iconic tracks in the world, hosting Formula One since 1929, and last year Formula E raced on the full historic Monaco circuit for the first time in what turned out to be an excellent race. And Prince Albert of Monaco is a big electric vehicle fan – he once drove his Tesla Model S around the track in a parade lap in advance of the Formula One race.

So, while we will have to wait until next year to see the Gen3 cars at Monaco, you can see the Gen2 cars there this Saturday. The race is at 3pm local Monaco time (6am PDT/9am EDT/1pm UTC), but check Formula E’s website for ways to watch. In the US, the race will air delayed on CBS at 1pm EDT.

Formula E has proven to be an exciting series to watch, with close racing and tight championship battles right down to the finish of each season. Due to the series’ format, it’s hard to tell who the champions will be until the very end, and anyone could win any race because there’s very little performance difference between the cars.

Since all the cars are closer in performance than in F1, you see few “processionals” where the fastest car is at the front and the slowest car is at the back and little passing happens during the race. In Formula E there are always lots of passes, and race outcomes are rarely predictable.

Even at Monaco, which due to its narrow streets is famous for producing races where little passing is possible, last year’s Monaco ePrix was full of action from start to finish. So it’s highly recommended to tune in this weekend.

And these cars next year seem like they’ll just give us more of the same, which is just great. While there is still a significant performance gap between Formula E and F1, F1 is improving much more slowly than Formula E is, so that gap will be narrowed next year and in coming years.

As far as the design goes, well, that’s subjective, so you can decide what you think about it. The design language on these new cars is…. certainly strong, to say the least. Personally, I don’t care too much about what the cars look like, I’m more a fan of the racing and performance, and showcasing electric vehicle technology. But in addition to the car’s angular look, they really leaned into the 80s/90s aesthetic with their unveiling photos, which add additional polygons and bright neon colors to both the car’s livery and the stage’s paint scheme just to hammer home the point they’re trying to put across:

I do think they probably could have used a higher polygon count on the new car’s body; it’s just a bit too angular for my taste, and I like having some curves here and there. I do respect their decision to just lean right into the aesthetic though.

Regardless of the design, I’m certainly excited about the changes to the Gen3 car, though the addition of all-wheel-drive does give a racing enthusiast a little pause. While AWD is unquestionably faster, it’s also a lot easier to drive than rear-wheel-drive. One thing that’s enjoyable about racing is the rawness of it all, the knowledge that the cars are constantly being driven at the limit of traction, inches from spinning off and losing it into the walls. Watching the back end of a car wiggle as it comes out of a corner, as the driver figures out just the precise moment to put the power down without shaking the whole thing loose, is exciting.

It’s possible that AWD could take this edge off and make the cars too “point-and-shoot.” With AWD powertrains you can put the power down much earlier on corner exit, as the front motor will help “pull the car out of the corner” without the fear of sending the rear axle, and thus the car, into an early spin.

But Formula E is all about trying new things, and dual-motor powertrains are something that EVs can do and gas formula cars have a harder time of doing, due to packaging requirements of a clunky gas drivetrain. Adding a driveshaft between an F1 mid-engine and front axle would be difficult and introduce a lot of compromises in terms of driver and ballast positioning, crash safety, and so on, even if it weren’t banned by the rules.

So despite my misgivings about it possibly affecting the racing in a negative way, it still feels like a worthwhile endeavor – and I still have faith that Formula E racing will remain more exciting than most series out there (with the exception of the always-wild Extreme E off-road electric series). Plus, “racing purists” seem to oppose just about every change on a “purity” perspective, which holds the sport back, and is one reason why F1 is stuck arguing about old tech like V8s while the rest of the automotive industry is moving on, so I’m all for change. Let’s see how it goes.

I can’t wait to watch these cars take the track next season. You should, too.