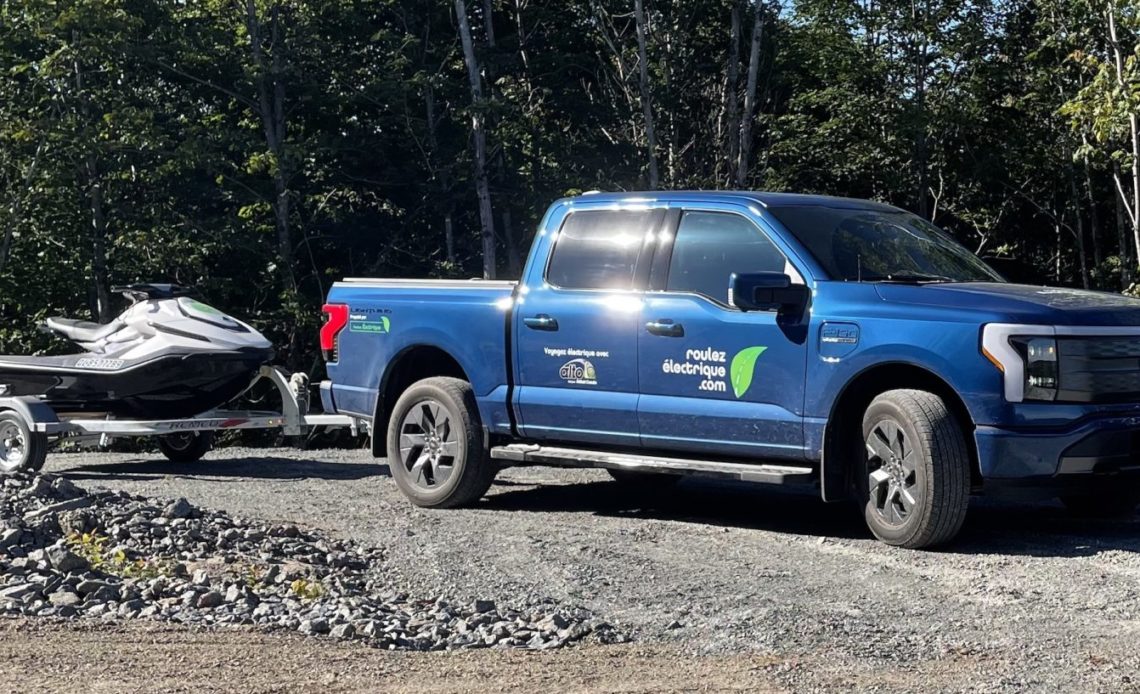 We got a glimpse of an all-electric off-roading and motorsport future with a Ford F-150 Lightning electric pickup truck charging a Taiga Orca electric jet ski.

At Electrek, we are excited not only for the electrification of the auto industry but also for all ground and water transportation, including off-roading and motorsport.

Off-road vehicles are meant to be enjoyed in nature, and it’s a bummer to be burning fossil fuels in those beautiful environments while polluting them with loud noises made by internal combustion engines. There’s a great opportunity to electrify those vehicles and create a better motorsport and off-roading experience.

We’ve already reported on several of those electric vehicles, like the Taiga Orca electric watercraft. Now, we get an interesting look at how you can make the whole ownership experience zero-emission with an electric pickup truck.

Yesterday, I met up with Sylvain Juteau, the founder of roulezelectrique.com. Sylvain is a longtime EVangelist and charging station distributor. He is also likely the first person in the world to have both an electric pickup truck, the Ford F-150 Lightning, and an electric jet ski – the Taiga Orca – or really any electric motorsport vehicle.

Over the last few weeks since he has had both electric vehicles, he has been using his Lightning to tow his Orca to some beautiful spots on the Saint-Maurice river here in Quebec. He is probably one of the first people in the world to be able to go virtually anywhere on a jet ski without creating any emissions, especially since he charges his electric pickup truck with solar energy.

One of the coolest things about owning both a Ford F-150 Lightning and a Taiga Orca is that Sylvain is able to charge the electric jet ski with his electric pickup truck, even when driving. We created a video to show how:

Using Ford’s bidirectional charging technology, Sylvain is able to charge into a 240-volt outlet in the bed of the truck with an EV charging station.

He can then connect the J1772 connector to the Taiga Orca, and it is going to charge at up to 6.4 kW:

Inside the truck, you can see the output in the Pro Power Onboard setting, which manages the vehicle-to-everything capacity of the F-150 Lightning:

Here you can see the output of 7 kW across two phases, which means that there’s some loss getting to the electric watercraft, but it is still nice to be able to charge on the road.

At this rate, it takes about two hours to fully charge the Orca.

We went to have a bite to eat and check out some cool other electric vehicles that Sylvain has (more on that soon), and then we were ready to go back on the water for some zero-emission fun.

I feel like this is giving us a glimpse at a future where the entire motorsport experience is completely zero-emission, getting us into (and experiencing) the wild.

The Taiga Orca is quite exceptional for that since you can both go super fast on it and have fun, like any other jet ski, but you can also go slow and quiet and enjoy nature, like this:

Now knowing that you can get there without burning fossil fuel makes the whole experience even better.