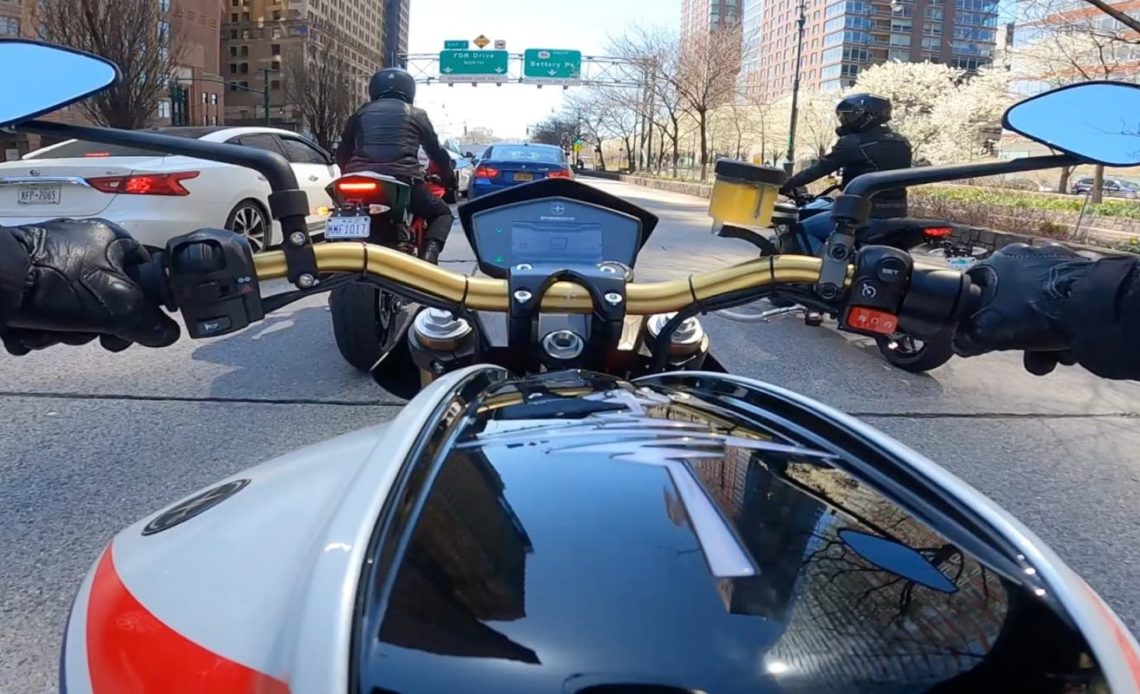 Earlier this year, I was invited to the Nasdaq by the electric vehicle investment company Ideanomics to get a closer look at the company’s newest acquisition: Energica’s high-power racing electric motorcycles. The morning started by watching suited up executives (as in Brooks Brothers, not Dainese) throwing a leg over the bikes in Times Square. But the next day, it was my turn. And while the heart of Manhattan isn’t necessarily the first place you’d think of for a high-powered motorcycle test ride, I still managed to find myself running short on throttle as we pinned it on the highways around the island.

Which highways? I have no idea. I don’t know much about NYC, and admittedly most of my knowledge of the city comes from Seinfeld. I was surprised to learn they had TVs in the cabs – those weren’t in any episode I saw.

But the lack of familiarity with my surroundings was perhaps for the best, as it meant I could focus more about the bikes than trying to recognize familiar sights.

I’m a firm believer in the ATGATT (all the gear, all the time) doctrine, even if I occasionally slip, so I slid into my and donned my along with the rest of my kit for my first ever ride on an Energica – a ride that I’d been waiting years to experience.

Like a kid in a candy store, I was excited by the glorious options laid out before me. Energica didn’t disappoint, bringing one of every model (at the time, so not including the Experia unveiled two weeks ago). The Energica Ego is the brand’s sportiest racing model, and is a bit more knees-in-the-armpits than I like to ride, so I passed over that model for now. I only had an hour or two and wanted to spend as much time as possible on the bikes that I could actually see myself buying. Since I’m not planning on dragging knee at the nearest track, I skipped the Ego in all its glory.

The next in the lineup was an awesome looking Energica Ribelle in a magnificent stars and stripes wrap that was made specially for the event. The Ribelle is a step down the line in terms of sporty ride, with a slightly more relaxed posture, but the model still brings the highest power offering from Energica with the same tech specs as the Ego.

Lastly, a beautiful green Energica EsseEsse9 waited for me like it had my name on it. While slightly less powerful than the first two, the raised bars and lower foot pegs give the most relaxed ride out of the Energica lineup and make this naked bike a great option for those that want to do daily commuting as well as some fun weekend canyon carving.

And when I say slightly less powerful, I’m not talking about a huge difference here. The Energica Ego and Ribelle offer a maximum of 107 kW of power, or 143 horsepower. The EsseEsse9 packs in a slightly more modest 80 kW or 107 horsepower.

Let’s just say that I wasn’t planning to test that limit. For my type of riding (which is mostly leisure and commuting), 124 mph is going to be plenty, please and thank you.

For those that want to have the comfort of the EsseEsse9 and the power of the Ribelle, CEO of Energica US Stefano Benatti explained to me that some customers have even ordered the latter outfitted with the bars and pegs of the former, ultimately creating a relaxed yet higher power bike.

My riding experience that day might not have been long, but a couple of hours was plenty to feel the differences between the bikes. The higher power on the Ribelle sure was fun, though I rarely got to take full advantage of it outside of red lights and highway on ramps (though both are a blast when you peel out nearly silently).

Energica isn’t only known for its high power, but also its industry leading battery capacity. The company’s 21 kWh battery packs allow more range than any other company.

I was only on the bikes for a couple hours, switching back and forth between the Ribelle and the EsseEsse9, but it seemed like I could barely make a dent in the battery capacity. The percentage meter took a while to drag through the 90’s and then into the 80’s, giving me the confidence that I wasn’t even going to have to think about charging today.

In fact, that was a slight bummer since I was looking forward to testing out the bikes’ DC fast charging. While all of Energica’s electric motorcycles can of course charge on Level 1 home plugs or faster Level 2 public charging stations, they famously also employ DC Fast Charging, sometimes unofficially referred to as Level 3, which can essentially “fill the tank” in close to 40 minutes.

That’s still longer than a gas stop, but would allow you to ride for several hours and then take a short break to stretch your legs while DC Fast Charging your battery back to nearly full.

And that’s exactly how Steven Day recently broke the electric motorcycle Cannonball Run record on his own Energica bike, racing from Los Angeles to New York in 111 hours.

I was expecting the big bikes to feel a bit more cumbersome, but they were actually quite comfortable and manageable beneath me. I’m not a big guy (5’7″ or 170 cm), and yet I didn’t need to muscle the Energicas around. They flick and flow easily beneath you just like you’d expect from a sporty Italian motorcycle.

In fact, I was running late for my flight while riding back to return the bikes in the heart of Manhattan and ultimately had to put the EsseEsse9’s maneuverability to the test. With gridlock traffic and a healthy ignorance of New York’s lane splitting laws (where I come from, that’s half the reason of riding a motorcycle in a city), I was zipping through traffic and weaving that 260 kg (573 lb) bike around like it was a Huffy with an attitude.

While this wasn’t the longest test ride I’d ever been on, it definitely whet my appetite to spend more time on Energica’s awesome electric motorcycles – the company is expanding their dealerships at a rapid pace, expecting to double their doors in the US this year. And for a bit of anecdotal evidence of Energica’s growing presence, I also recently had my first Energica sighting in my hometown of Tel Aviv, so I guess my new local dealer is up and running as well. Sounds like I’m going to have to check that out soon.

In the meantime, I can’t wait to get some good saddle time on Energica’s latest model, the recently unveiled Experia Green Tourer, which should offer even more of that comfortable touring ride I’m looking for. Stay tuned for that, which I’m hoping to be able to share with you guys soon.

Have any questions about the bikes that I didn’t touch on? (Hey, it was only a couple hours of riding!) Ask away in the comment section below, and I’ll try to share what I know. Or let me know your thoughts on Energica’s Italian electric motorcycles!