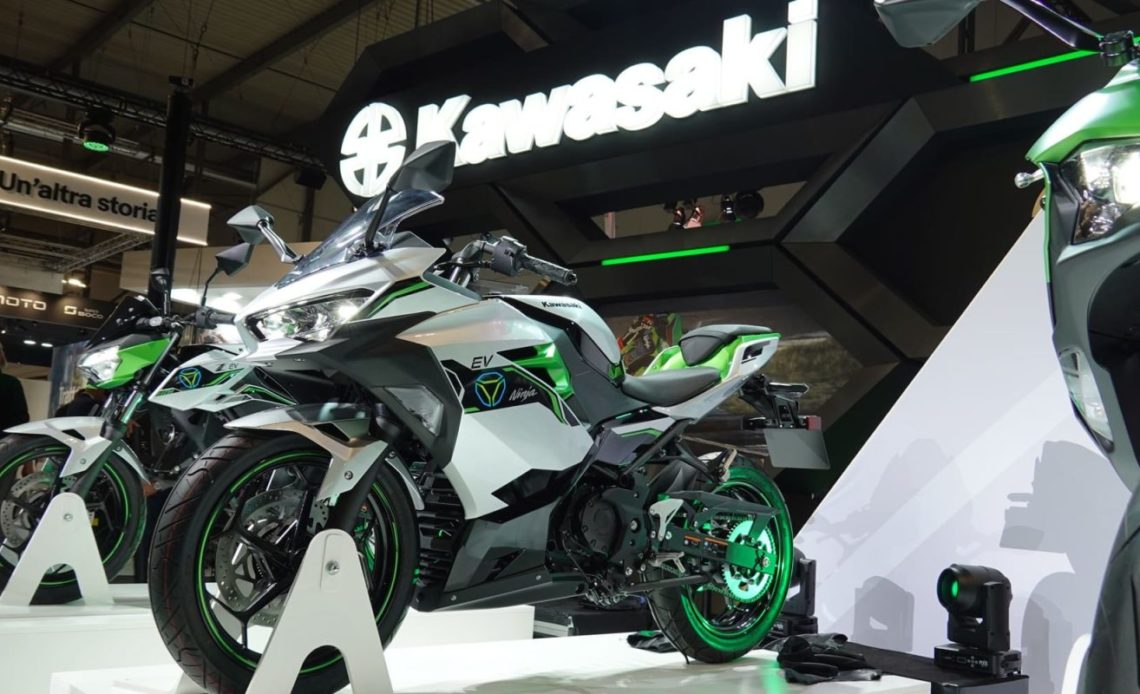 I’ll spare you the uninspired cliché about “Team Green going green,” and we’ll just get to the bikes.

While the electric Ninja and Z models are both still in prototype form, Kawasaki Motors president Hiroshi Ito announced to the audience that the two models would be available for purchase next year.

This is the Z Battery Electric Vehicle shown briefly at Intermot and now the very first Ninja BEV. These BEV versions represent two of Kawasaki’s leading brands, Ninja and the Z. Soon these pre- production machines will become actual production machines available to our customers in 2023.

As has been common with electric motorbike unveilings at EICMA this year, hard and fast tech specs are nearly non-existent on the models.

However, Ito did provide two key pieces of info, explaining:

European A1 license compliant, they will bring exciting ‘good times’ to daily commuting. They each have a large battery capacity of up to 3.0 kWh with two 12 kg battery packs that are easily removable.

Those two nuggets point to extremely muted performance from the bikes. Ito wasn’t kidding when he described them as fulfilling a daily commuting role. A1-compliant motorcycles in Europe have a maximum motor power of just 11 kW. That’s not particularly powerful, and puts the bikes in a 125cc-equivalent class.

Perhaps more striking is the limited battery capacity. 3 kWh of battery is diminutive compared to most electric motorcycles today. Batteries from Zero Motorcycles range from around 7 to 17 kWh, while Energica offers over 21 kWh of battery.

Even small, low-cost electric motorcycles like the SONDORS Metacycle and Ryvid Anthem, both of which are designed for commuter roles, offer at least 4 kWh of capacity.

Thus, it is unlikely for the Ninja EV to boast a range much higher than 75 km (47 miles) at city speeds, and likely around half of that range at highway speeds.

The removable batteries are surely designed to compensate for the low capacity, offering an easy way for riders to charge their batteries at home or in an apartment. But with today’s flagship electric motorcycles offering 5-7x as much battery as Kawasaki’s new entries, it is hard to imagine the brand will be competitive in the space when the motorcycles launch next year.

Of course, these figures shouldn’t come as a complete surprise. We’ve known that Kawasaki was planning a low-performance electric motorcycle for some time.

At the same show three years ago, Kawasaki rolled out a prototype electric Ninja that rocked a 10 kW motor (20 kW peak rating) and claimed a range of 100 km (62 miles).

At the time we assumed that the bike would undergo significant development to improve its performance, but that hasn’t seemed to be the case.

The bikes look impressive, no doubt. But under those panels rest a small and underpowered motor coupled to a pair of batteries smaller than the ones in the my electric scooter.

Why use such small batteries?

The only reason I can think of for Kawasaki to outfit their electric sport bikes with batteries sized for a scooter is because that might be exactly what they are: scooter batteries.

Kawasaki has spent years as part of a battery development consortium in Japan, originally created among the Big Four of Honda, Yamaha, Kawasaki, and Suzuki.

The consortium’s original goal was to develop a standard for swappable electric motorcycle batteries. In actuality, it is starting to look like the growing consortium is simply defaulting to Honda’s Mobile Power Pack design, which is essentially a Gogoro-style scooter battery.

Honda’s MPP batteries are the right size and capacity to fit into Kawasaki’s spec sheet, and so the company could be planning to incorporate those batteries into its motorcycles. Looking through the vents in the display prototypes shows a lack of batteries at all, so it is still anyone’s guess how Kawasaki ultimately plans to power its electric motorcycles.