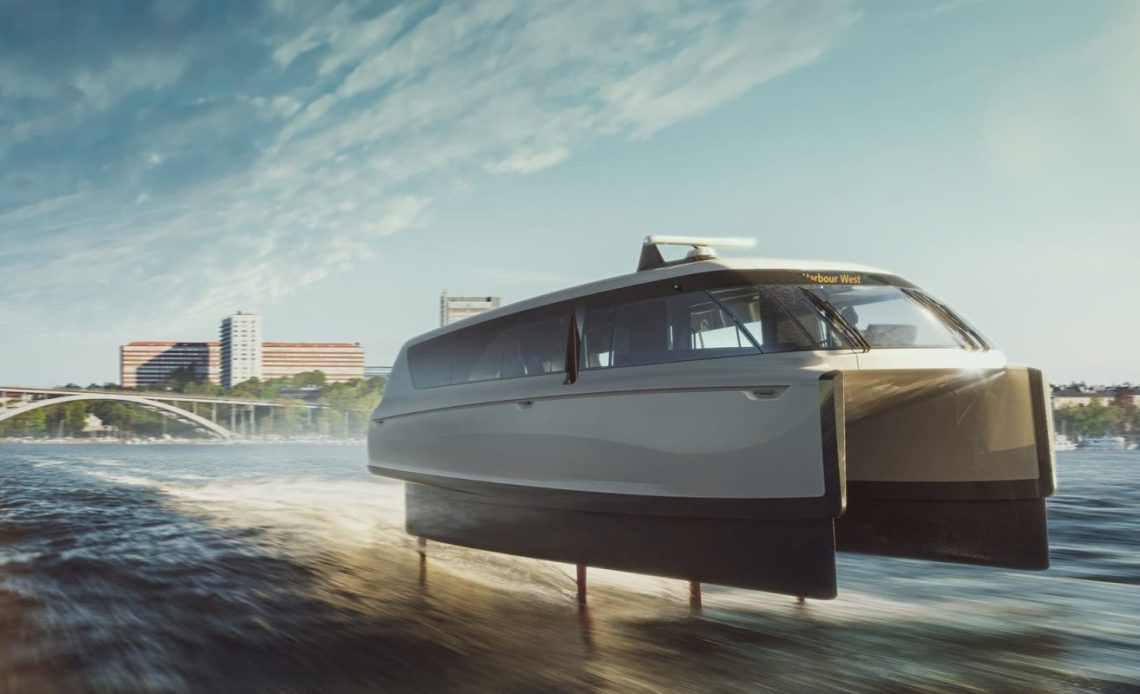 Swedish marine technology company Candela is showing off the first images of its P-12 Shuttle flying electric ferry that is expected to begin production later this year.

The flying electric boat rides on hydrofoils that lift it out of the water and help it consume considerably less energy than typical boats. The technology has already been proven on the company’s existing leisure boats and is now headed for commercial maritime use.

The reduced drag of hydrofoils also allows much higher speeds, helping the boat fly up to 30 knots (34 mph or 55 km/h), which makes it the fastest electric ship in the world according to Candela.

The P-12 Shuttle uses the equivalent of just 0.1 kWh of electricity per passenger kilometer. The vessel offers a range of 50 nautical miles at service speed from its 180 kWh battery and uses DC fast charging to recharge its battery in under one hour.

The 12-meter (40 ft.) catamaran is designed to carry 30 passengers and will operate its first route between the Stockholm city center and the suburb of Ekerö next year.

That route currently takes around 55 minutes by subway, bus, or diesel ferry (and the same by car during morning and evening rush hour), but will take around 25 minutes on Candela’s P-12 Shuttle, saving commuters nearly an hour per day.

Part of that time savings also comes from an exemption the P-12 receives in Stockholm’s no wake zones, where conventional boats are required to slow down to under 12 knots to avoid creating a damaging wake. As the P-12 creates virtually zero wake (leaving eerily calm water behind it as I witnessed myself last year), the vessel has received an exemption and can travel at faster speeds even around the city center.

In addition to providing faster commute times than the subway or cars it competes with, the vessel will offer both a cleaner and more efficient alternative to the diesel-based ferries that currently operate that route.

The Region of Stockholm will operate the first P-12 Shuttle next year for a nine-month pilot. If successful, Candela hopes to greatly increase the number of flying electric ferries on the water, not just replacing the current diesel ferries, but also shifting much of the highway traffic to the water instead.

In preparation of production, the carbon fiber keel for the first P-12 Shuttle will be laid later this year at Candela’s new automated factory in Rotebro, outside Stockholm. The company will use production processes honed over the course of designing and producing a series of electric hydrofoil leisure boats, hoping to eventually produce hundreds of P-12 shuttles per year.

The advantages for commuters extend beyond just quicker commute times. Compared to conventional ferries, the flying P-12 Shuttle is considerably smoother thanks to electronic stabilization. The boat’s hydrofoils are computer-controlled, making micro-adjustments 100 times per second to offer a steady and smooth flight path over the water that removes seasickness for sensitive riders.

There’s no other ship that has this kind of active electronic stabilization. Flying aboard the P-12 Shuttle in rough seas will feel more like being on a modern express train than on a boat: it’s quiet, smooth and stable.

The 30-passenger occupancy of the P-12 Shuttle is said to be a major advantage as well. Stockholm’s current ferries have around a 17% occupancy rate on average, meaning a 300-passenger ship generally carries around 50 commuters.

Smaller and nimbler vessels like the P-12 Shuttle can operate more efficiently, with lower operating costs, and on increased time tables.

That would make the ferry service much more convenient for commuters, as Eklund explained:

Instead of two departures per day, there would be a P-12 Shuttle departing every 11 minutes. This allows commuters to ignore timetables and just go to the dock and wait for the next boat.

With service beginning next year, it won’t be long at all before commuters will be able to set foot on a P-12 Shuttle. Though for anyone hoping to experience a Candela even sooner, feel free to hop in line to buy one of the company’s electric leisure boats. Just don’t expect it to arrive tomorrow – there’s apparently quite a demand.