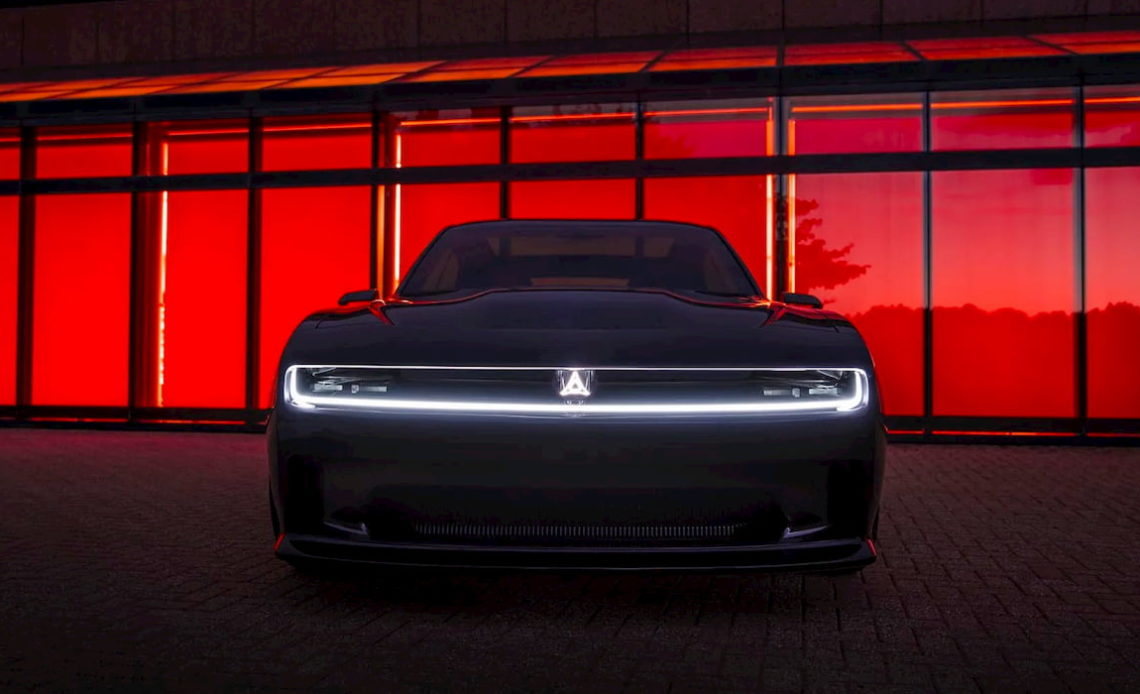 Dodge’s performance parts portfolio, or Dodge Direct Connection as it’s called, unveiled an idea of what we can expect for six of the nine power levels in its upcoming EV muscle car set to begin production in 2024.

The legendary muscle car is going fully electric as Stellantis-owned Dodge transitions into a new era of performance.

It’s no secret that electric vehicles can burn rubber better than their gas-powered counterparts, with instant acceleration and superior performance. For example, in August, Kia released its EV6 GT with 576 HP that beat a Ferrari Roma and Lamborghini Huracan Evo Spyder in a race.

With plans to retire the fan-favorite gas-powered Charger and Challenger in 2024, Dodge is setting its sights on a cleaner yet more thrilling future.

Dodge gave us a glimpse of what the future of muscle looks like in August, revealing its long-awaited muscle EV (“the world’s first battery electric muscle car“), the Dodge Charger Daytona SRT “Banshee” concept.

The automaker known for its iconic muscle cars is striving for the “Banshee” brand to promote the same sense of performance for drivers as the timeless Hemi, Hellcat, and Redeye do.

Dodge revealed a few unique features to draw muscle car enthusiasts in, such as exhaust sounds and eRupt transmission that gives you that “jerk” feeling of a gear shift. The Dodge Charger Daytona SRT features an aerodynamic design while incorporating the authentic muscle car look.

Up until now, Dodge has been relatively secret about what kind of performance we can expect from its EV muscle car other than letting us know it will be powered by its 800V all-wheel drive “Banshee” propulsion system.

According to a report from The Detroit News, the Stellantis-owned performance brand announced three base options for its Dodge Charger Daytona SRT Banshee concept.

To boost the horsepower of its electric muscle car, each base option will have two eStage kits designed to ramp performance to the next level. Drivers can unlock the upgrades through a radio frequency-controlled “crystal” key that plugs into the dash.

The electric muscle car will be fitted on the STLA large platform, one of four platforms revealed by Stellantis geared towards EVs.

The first two base models feature a 400V propulsion system. According to the post, the base 340 kW model will feature 455 HP. However, Dodge’s Direct Connection kits can unleash higher performance with 370 kW and 496 HP in the first stage or 400 kW and 535 HP in the second.

Where some people stop, we’re going to start.

Honestly, I can’t wait to see Dodge’s electric muscle car come to life, and it looks like I’m not the only one. The Dodge Charger Daytona SRT EV was spotted on the set of the new Fast and Furious (you can see the video on YouTube here).

If it’s good enough for Vin Diesel to save the world, I think muscle car fans will also enjoy it. In all seriousness, the concept is incredible looking, and as far as performance goes, it doesn’t look to disappoint.

As far as fake exhaust sounds, I don’t think it will be necessary to convert the muscle drivers. After you feel the instant torque of an EV, you won’t want to ever go back.