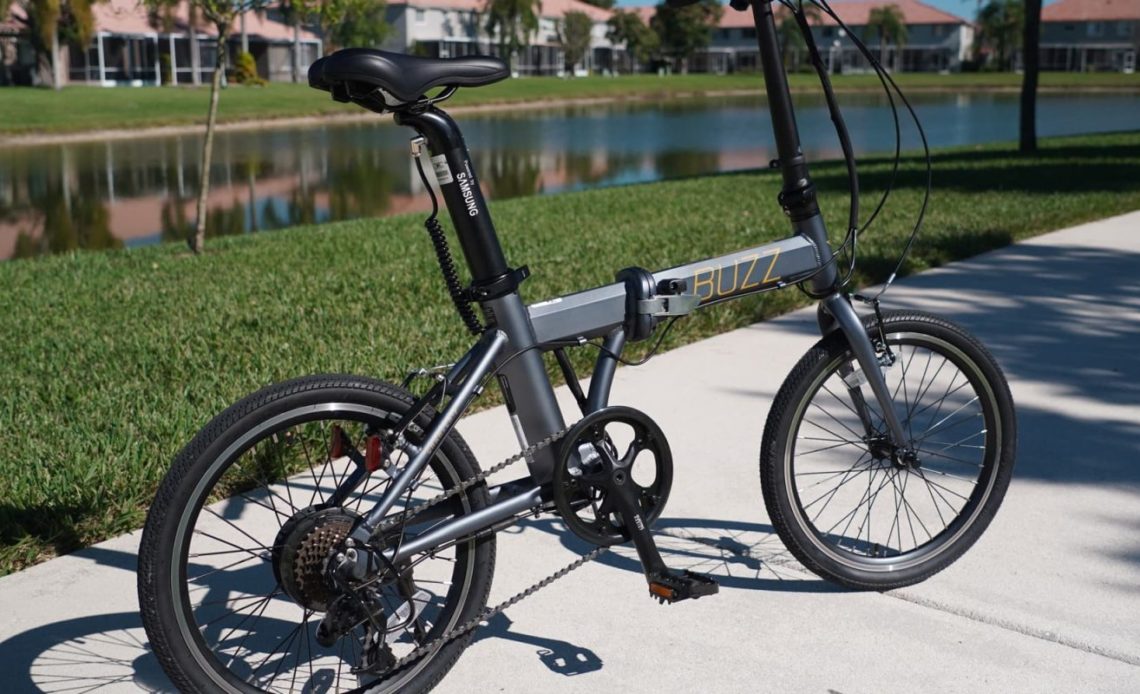 , which is the latest e-bike from the value-oriented electric bike brand Buzz, offers up a low-cost $999 folding model with the battery hidden in the seat post.

It’s a battery design that we’re starting to see more of, and for good reason. It can come in handy in urban settings where riders will likely want to take both the saddle and the battery inside with them while the bike remains locked outside.

Those are the two most commonly stolen parts of an electric bike, so combining them into one easy-to-grab component means riders can head thieves off at the pass.

But there’s more than just a clever battery design at work here on the Charter F.

Take a gander at my video review below to see what I mean, then keep reading afterward for the rest of my in-depth review.

The Buzz Charter F’s specialty is being a lightweight, no-frills folding e-bike.

At just 35 lb., it’s definitely on the lighter end of the range of e-bikes I’ve tested. Folding bikes are often particularly heavy due to the extra weight of a few rugged folding mechanisms, but the Buzz Charter F manages to keep an eye on its waistline to maintain its trim figure.

That makes it ideal for anyone that needs a lightweight folder to lift into a car trunk or carry onto a subway.

That being said, the light package comes at a cost: power.

The 250W rear hub motor isn’t the peppiest motor I’ve tried before. In fact, it’s on the lower end of the spectrum.

This is a pedal-assist electric bike – no throttle included – so you’ll be adding your own assist. But don’t expect to lay down rubber when you pull away from the stop sign on the Buzz Charter F.

The nice thing though is it still gets you up to the maximum allowable speed for Class 1 e-bikes of 20 mph (32 km/h). A lot of these small folding e-bikes top out at 15 mph (25 km/h), so the extra speed is a nice benefit, even if it takes a few extra seconds to reach the top end.

The good news about the low power is that it helps the rather low capacity 288 Wh battery last longer. They say you can get up to 40 miles (64 km) of range out of the e-bike, but that must be in the lowest of the three power modes. If you’re riding faster, expect closer to 25-30 miles with reasonable pedaling.

The fact that the battery is hidden in that seat post makes up for the small battery though, since it is so convenient to pop in and out when you lock the bike up.

To maintain , a few compromises had to be made.

In addition to the smallish motor and battery, there’s a simple LED dot display. It shows you the battery capacity, pedal assist level, and that’s it. It’s good enough for other e-bikes I’ve enjoyed, and so it’s good enough here, too. But if you were hoping for an LCD screen with speedometer and other data, you’ll have to look elsewhere.

Next, the bike uses rim brakes. They have plenty of stopping power, so that’s not a concern. But they can be a bit more finicky to adjust over time as the cable stretches. You’ll also need to align the brake pads each time you change them, which is a slightly tricky task if you aren’t used to it. Any bike shop can help you do it in a couple minutes though, if you don’t want to get your hands dirty yourself when the time comes to change brake pads.

There’s also no fender package or rear rack. Not only are they not included, but there aren’t even options available as add-on accessories. You’ll have to go third-party if you want to add those parts. I would love to see the company at least offer a compatible option that you can purchase directly instead of trying to find your own third-party parts. When Lectric eBikes recently unveiled the XP LITE and didn’t include fenders or a rear rack to reduce the price, at least they offered them as paid upgrades. So that would be a nice thing to see here.

Lastly, there are no lights on the bike. That means if you want to ride at night, you’ll have to add your own. They do give you a pair of rear reflectors, which is pretty neat. But true e-bike lights should be standard equipment, in my opinion.

So while there’s a lot to like here, there are some compromises that have been made as well.

All told though, the bike rides well and is ultra-convenient for city riding. Just don’t get caught out after dark without buying a decent set of bike lights to add!